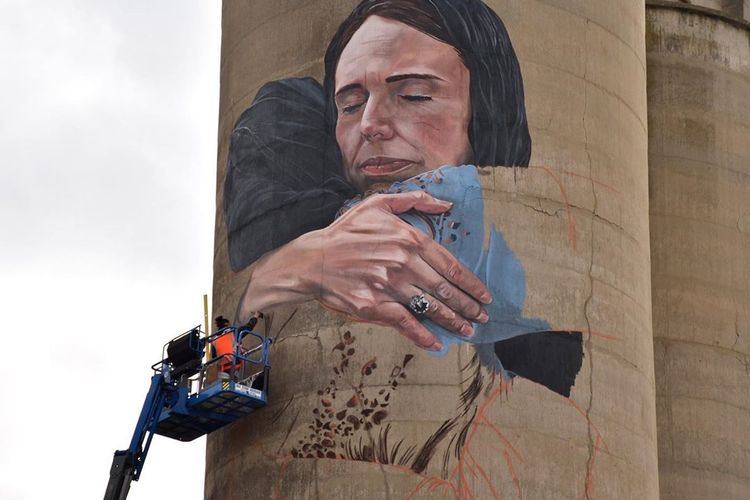 A large-scale image of New Zealand’s prime minister Jacinda Ardern embracing a Muslim woman unveiled in Melbourne earlier this week has sparked controversy. The memorial piece, created by the artist Loretta Lizzio, was painted on the side of a 25-metre tall silo in Brunswick in the north of the city.

Fifty-one people were killed when a terrorist stormed two mosques in Christchurch in March and opened fire. Brenton Tarrant, a 28-year-old Australian man, faces charges of murder and attempted murder. The image of Ardern in a hijab hugging a mourner became a symbol worldwide of her solidarity with the Muslim community.

A crowdfunding campaign on the GoFundMe website raised more than $11,000 for the mural, which is on privately owned land (earlier this month the local council approved the project).“We want this message, this moment in time, remembered,” says an online campaign statement.

But more than 14,000 people have so far signed a petition protesting the mural, which was initiated by a man named Antonio Giuliani. The petition statement says: “We people of Melbourne don’t want this mural be in Melbourne. We don’t see the necessity to do it. As recently we assisted at more than 350 killed in Sri Lanka we should Mural the Sri Lanka Flag as well or Mural [sic] from other Terrorist attack?” Giuliani could not be reached for comment.

An image of Lizzio creating the work has been posted on the artist’s Instagram feed, prompting both positive and negative comments. One commentator says that the image “fills me with hope and compassion every time I cycle past”. Another says that “the attack happened in New Zealand, it has got nothing to do with us.” Lizzio responds that “hate crimes are a global issue… this particular project is about love and acceptance of all that call Australia home, no matter your background.”