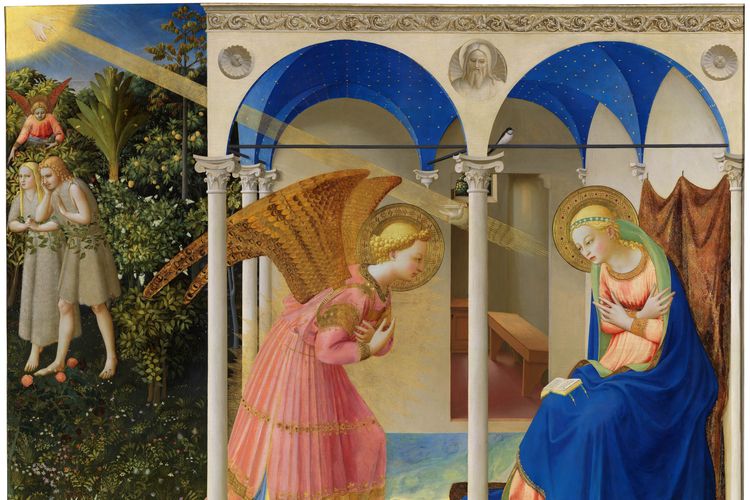 Fra Angelico, The Annunciation
Courtesy of the Museo del Prado

With this summer’s exhibition devoted to Fra Angelico the Prado’s agenda was twofold. First, the Madrid museum wished to celebrate its rather surprising new status as an Angelico hub, following the acquisition of the dazzling Madonna of the Pomegranate (around 1426), which entered the collection in 2016 with an accompanying donation of a little known predella panel depicting the funeral of St Anthony Abbot. Together with the celebrated Annunciation altarpiece (around 1425-26), these additions mean that the Prado’s holdings by this great friar-painter are now unrivalled anywhere outside of Italy. Second, there was the desire to provide these exceptional holdings with some context in such a way that the permanent collection never could, given its overall shortfall in the arena of early Italian painting.

Within a dozen years or so years of his death, the Dominican painter, Fra Giovanni da Fiesole, had been labelled “Angelico” in a poetic response to his paintings. Over the next century, his reputation as the angelic painter spread like wild fire and, in 1550, it was crystallised by Giorgio Vasari in his biography of the artist, which described a man of humble and dignified virtue, who would never pick up a paintbrush without a prayer on his lips. Small wonder then that, in the first histories of Florentine painting, developed when the discipline of art history itself was in its infancy, Angelico came to be seen as something of a case apart. We have come a long way since then. With the groundbreaking work of Roberto Longhi, and several generations of scholars since (first among these is the exhibition’s curator, Carl Brandon Strehlke), the historical painter has been excavated from the posthumously woven mythology. In the Prado’s exhibition galleries, Angelico’s paintings, beautifully and sensitively displayed alongside an impressive range of works in other media, take their rightful place in the “revolution in the arts” which played out in Florence in the first half of the century.

Before entering the Dominican order in around 1420 and becoming Fra Giovanni, Angelico is identified in one document both by his birthname, Guido, son of Pietro, and by his profession, painter. For Strehlke, this is key: Angelico was a painter first, friar second. In one of countless thought-provoking suggestions set out in the catalogue, Strehlke muses that Angelico’s decision to take holy orders was motivated (at least in part) by his ambitions as a painter. We will never know for sure, since the documentary evidence is paltry. Certainly though, while training in the workshop of the Camaldolese monk, Lorenzo Monaco, the young artist would have seen firsthand how direct affiliation with a prominent religious entity could open doors.

Angelico’s interactions with the art of others, and theirs with his, underpin the exhibition as a whole. In the opening rooms a handful of his early works, executed before taking holy orders, are displayed alongside those of the leading Florentine masters who were the compass points in his formation as painter. His master, Lorenzo Monaco, appears together with figures such as Ambrogio di Baldese and Gherardo Starnina, whose remarkable predella from Valencia is a rare survivor from his 12-year stint on the Iberian peninsula. But even as Angelico laid the foundations of his art, they were simultaneously uprooted. The young painter soon absorbed, and responded nimbly to, developments in the sphere of public art: an abundance of new sculpture for the cathedral and church of the guilds, Ghiberti’s first set of bronze doors for the baptistery and the all new architectural language of Filippo Brunelleschi. Here, as in other parts in the exhibition, the challenge of representing such pivotal projects, when the works themselves cannot be lent, is met creatively. Donatello’s terracotta reliefs, for example, encapsulate the boldness of the new sculptural language that characterised the public statuary, while also revealing how Brunelleschian motifs were quickly assimilated into other artistic media.

Angelico continued to respond to, and contribute to, the changing artistic landscape throughout his career. His interactions took many forms and, in the show, there is certainly a lot going on. Too much in places? In places, perhaps. Arguably the presence of both Campin and Uccello in the gallery devoted to the newly conserved Annunciation have the effect of confusing rather than strengthening the display. But overall, the level of ambition finds just reward. There are long-lasting exchanges (and undoubtedly friendships too) with figures such as Donatello, Ghiberti and Masolino. There are also brief and explosive encounters. The impressive group of fragments from Angelico’s high altarpiece for San Domenico appears in captivating dialogue both with works from the Ghiberti workshop and with two Florentine works by Gentile da Fabriano, whose sojourn in the city in the early 1420s had seismic effects. A little later came the momentous though short lived ascendancy of Masaccio and we observe how the encounter between Angelico and the younger painter was two-way. In the final galleries, these themes of artistic transmission and exchange become more far reaching in scope, including works by Angelico’s “last Italian follower”, Antonio Romanazzo, as well as a Netherlandish tapestry-maker working in Rome using Angelico’s designs. Finally, the Angelico effect seeps beyond the Italian peninsula with a crucifixion by the painter Pedro Berruguete, who worked in Spain in the second half of the 15th century.

In addition to the myriad ways in which Angelico’s art intersected with that of other artists, the works in the exhibition also reveal his utterly beguiling abilities as a narrative painter. Drawing closely upon his own lived experience, we see how his theological training informed his interpretation of religious subject matter, but also how material aspects of his immediate surroundings— Florence’s urban fabric, for example, or its trade in luxury textiles— collided with his unfailingly fertile imagination in his depictions of the biblical events and the lives of saints.

Angelico prevails both as a painter of first rank and as the business-savvy leader of a prolific workshop, employed by a full gamut of patrons, private and public, religious and secular. None of this should come as a surprise. After all, to be a Dominican friar in 15th-century Florence was to belong to a prominent corporation, whose members wielded considerable influence in the spiritual, cultural and political life of the city. Indeed, what we can glean about Angelico’s professional demeanour is perfectly in keeping with the spirit of the founding members of his Dominican brotherhood: inherently collaborative, profoundly intellectual and relentlessly innovative. Under Strehlke’s masterful stewardship and keen visual sensibility, Angelico’s pivotal role within the “vibrant laboratory” of early Renaissance Florence is affirmed.