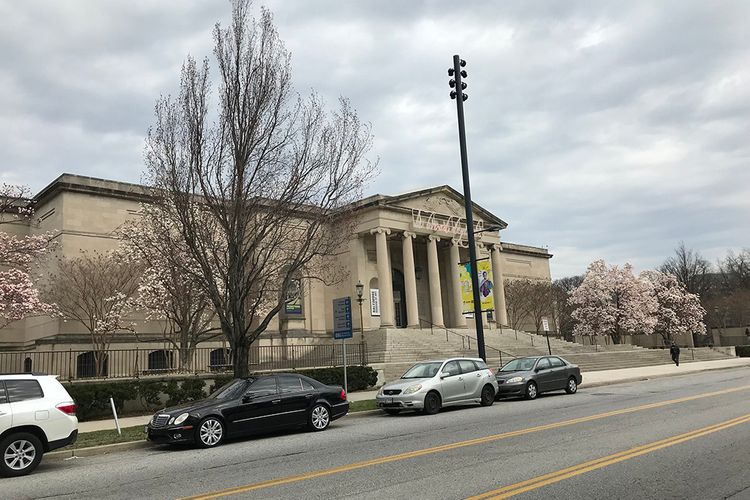 The Baltimore Museum of Art

The strife surrounding the Baltimore Museum of Art (BMA)’s decision to deaccession three valuable paintings is mounting, with two former board chairmen saying they have withdrawn pledges to give $50m to the institution and two artists resigning as trustees.The board chairmen, Charles Newhall III and Stiles Colwill, say they had made pledges of $30m and $20m but are cancelling them to protest the museum’s plan to sell paintings by Andy Warhol, Clyfford Still and Brice Marden. Newhall has also resigned as an honorary trustee. The museum’s director, Christopher Bedford, has said it plans to use the hoped-for $65m in proceeds from the sales for collections care, which would include boosting staff salaries; to bolster the BMA’s appeal in a city that has a Black majority; and to add more works by women and people of colour to the collection to broaden the institution’s art historical narrative.“Sadly, due to the museum’s new directions and leadership the two major donors that were making the combined $50m gift have changed their minds and that money will now go to other charitable purposes,” Newhall says in the 15 October letter announcing his resignation. He asserts that other donors are retracting planned gifts as well.Colwill says he had pledged to leave his entire estate, valued at $20m, as part of the museum’s “In A New Light” campaign to raise funds for the museum in 2014. “Just over a year ago I quietly changed my estate plans when it became clear to me that under the leadership of Christopher Bedford the BMA was no longer trustworthy to receive this bequest,” he says in an email. He adds, “It was only in the past weeks that I was, quite sadly, publicly proven right about the BMA’s current leadership. Thus I allowed word of my decision along with that of Mr. Charles Newhall, another former chair of the board, to announced.” “This is a very unfortunate situation indeed,” he says. But in an email to The Art Newspaper, Bedford and the chair of the museum’s board of trustees, Clair Zamoiski Segal, say that the pledges “have not been recorded with the museum as gifts and are not part of the museum’s current budgeting”. “It seems that it needs to be said that certainly we would not expect two individuals who have so strongly asserted their displeasure and disdain for the BMA’s vision to give to the museum,” they add. “However, this is not evidence that donors are rescinding gifts to the museum.” But Newhall says of his pledge, “I reported on this at every board meeting for four years,” adding, “Mysteriously there are no minutes.”The BMA’s move to sell the three paintings as part of its diversity initiative follows a decision by the Association of Art Museum Directors (AAMD) in April to suspend a prohibition on using proceeds from art sales for purposes other than acquisitions. Other museums across the country have also ramped up plans to sell paintings to finance “collection care”, a practice now sanctioned by the AAMD. The Warhol, The Last Supper (1986), is being offered in a private sale through Sotheby’s with the apparent goal of fetching at least $40m. Marden’s 3 (1987-88), with an estimate of $10m-$15m, and Still’s 1957-G, estimated at $12m-$18m, are to be offered at Sotheby’s on the evening of 28 October. Both the Marden and the Still are the only paintings by those artists in the Baltimore museum’s collection.The salvos from the two former board chairmen come amid the resignations of the artists Amy Sherald and Adam Pendleton as BMA trustees this week. Neither expressed objections to the sale of the paintings in their resignation letters but said they could not devote enough time to participate fully on the board. Sherald was clearly affronted by the accusations in Newhall’s letter.Ticking off the reasons he has resigned, Newhall writes: “It is my belief that a museum should collect the best art, not art from each faction of our population. I do not agree with Chris Bedford’s vision of rewriting the canon of art history by rectifying the wrongs of the past. I certainly do not believe that one sells masterpieces to fund diversity!” He also says: “In my mind Chris Bedford is stacking the board with artists that he promotes, and the BMA has bought paintings from. This appears to be a serious conflict of interest.”Sherald writes in response: “I take umbrage for my nomination as an artist and subsequent selection as a trustee for being unjustifiably highlighted in Chuck Newhall’s resignation. This is a high mark of audacity to assume that I was nominated only to be used as a pawn for Christopher Bedford’s gain. I like to believe that we are all seen for our capabilities and as individuals.”

This is a high mark of audacity to assume that I was nominated only to be used as a pawn for Christopher Bedford’s gain.
Amy Sherald

“Any suggestion otherwise is implausible,” she writes. “Not only is it egregious but it is irresponsible especially given the fact that trustees are vetted and approved by committee. While I have my impressions about the deaccession I respect the opinions of the remaining trustees whose tenure has informed their decision-making.”In his resignation letter to the board, Pendleton writes: “I have been unable to fully participate in the activities of the museum due to other commitments, as much as I would have liked to, and feel blindsided by recent controversies. I have my opinions about the recent and ongoing proceedings but do not feel as though I am in a position to weigh in, which has given me clarity about my decision to resign.” Efforts to reach Sherald and Pendleton today were unsuccessful.A coalition of former trustees, donors and others with ties to the BMA submitted a letter to the Maryland attorney general and secretary of state last week seeking to block the sales of the paintings and requesting an inquiry into potential conflicts of interest in the museum’s decision. The letter has drawn more than 180 signatories.Arnold Lehman, a former director of both the BMA and the Brooklyn Museum, was among those signing. In an interview, he lamented the plan to sell the Warhol “The Last Supper”. “I have the most vibrant memory of sitting in the kitchen and bidding for the Warhol” in 1989, he says. “We got a lot of heat for buying the picture. Very few people were collecting the later work” by the artist.

Andy Warhol, The Last Supper (1986), which is being sold privately through Sotheby’s
Courtesy of Baltimore Museum of Art

Shortly afterward, Lehman says, the legendary dealer Leo Castelli “stopped me on the street and said, “Arnold, you just bought a masterpiece.” He also criticised the BMA for arranging to have the Warhol sold privately rather than at auction. “That means no transparency,” he says. “Two years ago, Christie’s sold a Warhol for $60m,” as opposed to $40m, he adds, “so someone has not done their homework properly”. In their joint responses today to Newhall’s resignation letter, Bedford and Segal rebutted many of the former board chairman’s points, including his argument that “a museum should collect the best art, not art from each faction of our population”. “We also believe that museums should collect the best art—art that captures innovation and imagination; that pushes preconceived formal and conceptual boundaries; that speaks to wider culture across time and across geography; that inspires awe, comfort, and conversation,” they write. “We equally believe that such art is made by individuals across background, race, gender, and sexual orientation. And it is a fact—not a belief—that many of the artists that have produced great art have also actively been omitted from art history purely as a result of their identities.”They add, “We are certainly sorry to hear assertions that diversity is not at least equal in priority to three paintings in our collection.” The BMA has said that of the $65m that it hopes to raise through the sales, $10m will go to its acquisitions fund, allowing it to seeking out more works by under-represented artists, and around $54.5m would be used to create a new “endowment for the future” for the direct care of the collection. The museum projects that this would generate approximately $2.5m in annual income that will be used to offset costs for research, conservation, documentation and exhibition of artworks as well as the salaries of 46 staff members. It says that $500,000 would go towards a new initiative to promote internal and external diversity, equity, accessibility and inclusion (DEAI) initiatives.