At a high-stakes tournament, a lucky fisherman reels in $2.6 million 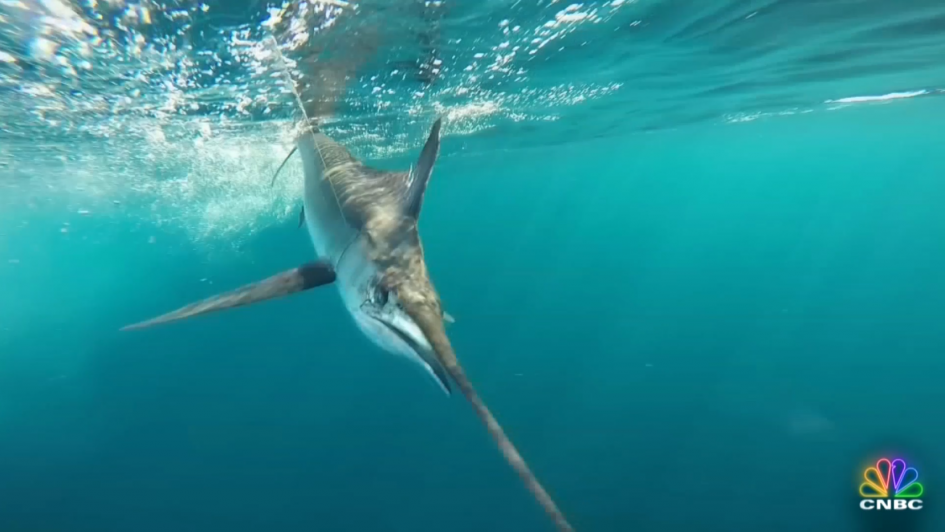 If it’s hard to believe that one fish could be worth a mind-boggling $2.6 million, then you’re probably not familiar with the high-stakes world of tournament sports fishing.

The White Marlin Open in Ocean City, Maryland, is a week-long fishing competition held annually in August and in the fishing world, it’s basically the Super Bowl. This year’s competition takes place Aug. 5-9.

The prize money for last year’s tournament ballooned to more than $11 million, making it the most super rich fishing competition in the world.

On a recent episode of CNBC’s “Secret Lives of the Super Rich,” cameras followed Roy Schwalbach, the CEO and founder of Jack Studios, a film, photography and event space, as he competed in the event last season.

For his chance to pull millions of dollars out of the ocean, Schwalbach and the other anglers who competed had to pay-to-play and the tournament fees aren’t cheap.

“You’re fishing at a pro level, you feel like you’re an NFL player,” said the NYC-based CEO, who loves the sport so much he built a home in Ocean City so he could fish more.

Between all the entry fees, hiring a captain, paying the crew, chartering a fishing yacht, plus all the fuel needed, the high-end fishing trip cost him about $45,000, Schwalbach said.

The high cost of entry means many anglers compete as a team, which means they can split all the costs — and if they win, the prize money too.

“I have a lot more faith myself as an angler than bringing bodies into split the money,” Schwalbach said.

The odds of reeling in $2.6 million

All the cold hard cash that’s up for grabs is enough to lure in hundreds of participants, who journey to Ocean City for a chance to cast out a line and strike it rich.

More than 300 boats competed in 2018, so the chances of reeling in that $2.6 million white marlin were slim. All fish have to meet the tournament’s minimum weight requirement. Then, assuming an angler on one of those boats catches a qualifying fish, the odds of winning were about 1 in 300, or less than 0.3%.

Schwalbach wasn’t discouraged because he believed his odds were much better because he’s been fishing for over 50 years.

As you might imagine, a tournament with so much money on the line has lots of very strictly enforced rules.

“You’re dealing with millions of dollars, and there are a lot of cheaters out there so they [tournament organizers] put polygraphs in there to keep everyone honest,” said Schwalbach.

Competitors can only fish on three days of the five-day event. And while boats can leave the docks before sunrise to search for a spot to fish, no angler can put a line in the water before 8:30 a.m. sharp, and every competitor’s line must be pulled from the water at 3:30 p.m. on the dot.

And while a boat can have more than one fisherman on board, once there’s a bite and an angler takes the pole he or she must reel the fish in without assistance. In other words, no other angler can so much as touch the pole. Any violation of these rules and countless others can lead to an immediate disqualification without any refund of entry fees.

And since the competition happens as many as 90 miles offshore where fishing is almost entirely unmonitored, any person who wins more than $50,000 may be, at the discretion of the directors, subject to a lie detector test to address any potential question of impropriety that may arise.

And if the polygraph results reveal someone broke the rules, the results can be used to disqualify a contestant and even strip prize money.

How serious are they about the lie detector, you ask?

Back in 2017, polygraph results suggested a competitor violated the tournament rules and those results were used to strip him of a prize worth more than $2.8 million. (The $2.8 million was later distributed to winners of other fishing categories.)

When asked about the 2017 disqualification, Schwalbach said it was the right decision. “The rules are the rules and he was definitely not entitled to the prize money.”

Over three days, CNBC cameras spent more than 30 hours with Schwalbach at sea, while he burned thousands of dollars in fuel and motored across hundreds of miles of ocean.

Schwalbach and his crew reel in a White Marlin

He reeled in some feisty white marlins, and cameras rolled as he fought to reel in what he thought was the $2.6 million fish-that-got-away.

Spoiler alert: While Roy did not end up catching the “monster” winning fish, here are the winners:

And this white marlin is the most expensive billfish in the world:

This $2.6 million prize-winning billfish weighed in at 83 lbs. earning Weldor’s Ark the tournament’s top prize. The marlin is worth about $31,325.30 per pound.

Despite not catching the big money fish, Schwalbach said he still had a blast. “It was an amazing tournament and probably one of the most fun in a lot of years.”

No fish goes to waste

If you’re curious to know what happens to all that pricey fish filet when the tournament’s over, you may be happy to hear it was donated to Maryland Food Bank, an Ocean City nonprofit that helps serve food-insecure Maryland residents, a spokesperson for the Open said.

“They donate all the food to the food bank, and I love that,” said Schwalbach.