Back to the drawing board: new London fair pushes works on paper 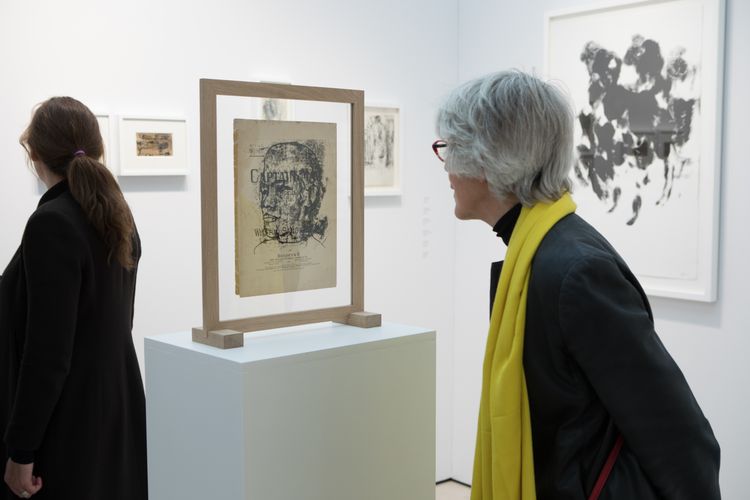 Dealers participating in Draw Art Fair at Saatchi Gallery in London (until 19 May), a new event focused on works on paper, insist that there is an audience for drawing, both in a commercial and critical sense.

Toby Clarke, the director of Vigo Gallery in London, is among the 60-strong exhibitors; he says that “drawing may well be the quieter sister of painting but so many artists have obviously worked out their ideas through the medium.” He is showing a large-scale panorama of drawings by the Sudanese artist Ibrahim El-Salahi, priced at the top end of the fair price range at £63,000.

Price points at the fair rarely go above $100,000 with the exception of some blue-chip works including the Chet Leibs gouache (1966) by Alice Neel, available with Aurel Scheibler gallery of Berlin (priced at $150,000). But other at market darlings can be acquired for a fraction of their usual market price. Frank Auerbach’s ink and pencil piece on paper, The House (2011), is available with Marlborough Gallery, for instance, at £10,000.

“The fair came at a perfect time for us, just when we wanted to introduce an artist for whom drawing is central to his work. I knew we had to go beyond our gallery collector base. I’ve been really pleased with the response,” says the London-based dealer John Martin who sold two works by the German artist Mario Lobedan, priced at £1,650 each (Untitled XXX/Untitled XXIII), to German and UK collectors.

Jade Turanli, the founder of Pi Artworks gallery in London, says that she saw different collector groups intermingling for the first time at a fair. “My millennial clients were looking at the works of Markus Vater (priced between €800 and €1,200) while more established buyers were focused on Susan Hefuna’s Cairotraces (2014, watercolours on paper, €7,000 each).”

Other dealers point out the benefits of investing in works on paper. “You can mix them up with paintings, and play around with works on the wall. They attract a different type of clientele on a different budget,” says the Basel-based gallerist Anne-Mosseri Marlio who is showing works by Minoru Onoda (1937-2008), a leading member of Japan’s Gutai group. “These works are fresh from the estate [represented by the gallery],” she adds; price points are between $15,000 and $75,000.

According to the fair website, “exhibitors will be able to juxtapose drawings with related paintings, sculptures, photos or videos, in a ratio of approximately 70% to 30%, using drawing as the core concept and placing it at the heart of a broader perspective on artistic creation and production.”

Indeed, some dealers have brought a range of works to complement their drawings inventory; these include Jeanne Bucher Jaeger of Paris which is showing a sculpture by Claude de Soria (Boule, 1977) alongside a large-scale piece in Indian ink by the Portuguese artist Rui Moreira (À la recherché du temps perdu I, 2018, €35,000).

This dialogue between media is seen elsewhere. Special scholarly exhibitions make the case for drawing throughout the 20thcentury; a special display dedicated to Isamu Noguchi presents his exquisite Worksheets for Sculpture (around 1945-47); these drawn diagrams are the basis for his Paper Maquettes (around 1960), a series of interlocking paper cut-out pieces.

The fair organisers are adamant meanwhile that drawing has value in the digital age. “Welcome to the inaugural edition of Draw Art Fair London, where we celebrate drawing as a vital creative process with a unique place in our artistic culture,” writes the fair’s strategic director, Jill Silverman van Coenegrachts, in the fair catalogue.