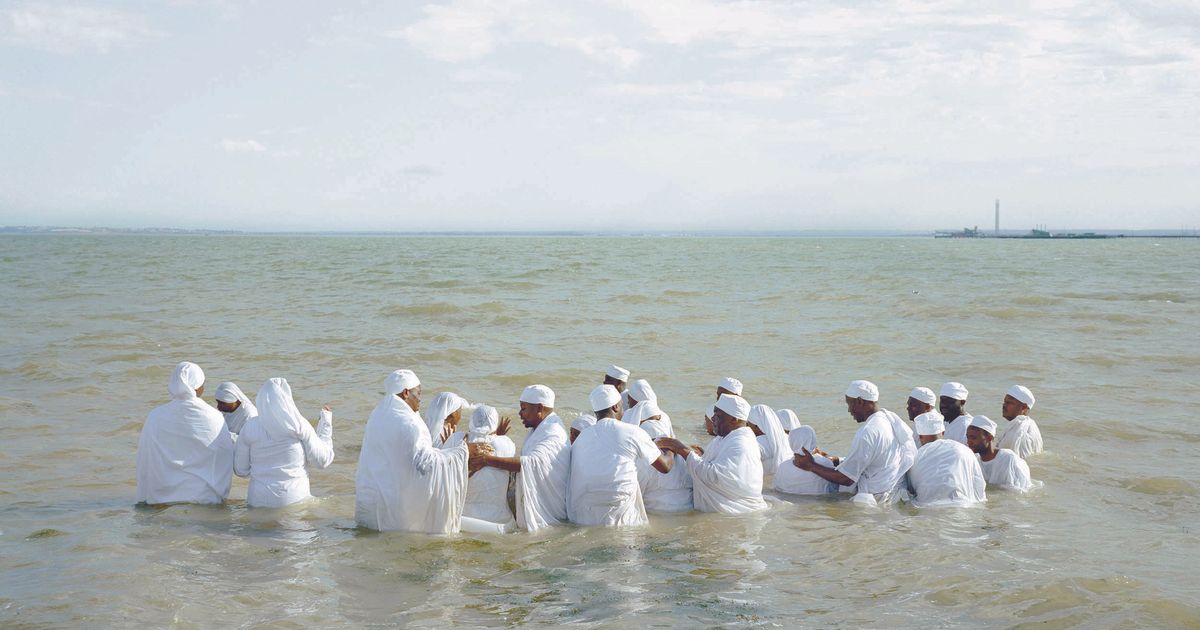 Over the past year, the River Thames has been a source of solace for many Londoners. This ever-changing waterway snakes through the centre of the city, dividing it into north and south while dramatically shapeshifting with a tidal ebb and flow that pays no heed to human dramas. Now, 12 months since London’s first lockdown, the Thames is the inspiration for a number of new projects that celebrate the power of this mighty river and its ability to fuel imaginations, transform its surroundings and provide a conduit into the multiple identities and histories of the communities living alongside it.The presence of the Thames at London’s heart is accentuated by the completion this month of Illuminated River, an ambitious, privately funded public commission that lights up nine of its bridges and describes itself as the longest public work of art in the world. The project is set to transform the nocturnal Thames for the next decade and is being driven by US artist Leo Villareal, who is using the latest LED technology to “paint with light”. Two years ago, the first phase lit up Cannon Street, Millennium, Southwark and London bridges, and now the illumination of Blackfriars Road, Waterloo, Golden Jubilee, Westminster and Lambeth bridges completes the commission. Working with London-based architects Lifschutz Davidson Sandilands, Villareal is basing his slowly moving LED light sequences on the fabric and character of each individual bridge, as well as their cultural and historical contexts: for example, the green light he is using at Westminster Bridge apparently echoes the leather upholstery of the debating chamber in the House of Commons.

From source to seaLondon’s bridges also feature in Thames Log (Loose Joints Publishing, 2021), a book of photographs taken by Chloe Dewe Mathews up and down the length of the Thames—from its boggy source in a Gloucestershire meadow to the vast expanse of its estuary mouth that pours into the North Sea. Over five years Dewe Mathews has documented the many and various rituals that take place in, on and around the Thames—some ancient, some modern, some communal and others solitary, in which the ever-changing river is the main protagonist. In her compelling images, the Thames receives May Day Morris Dancers, a wooden cross thrown in annual blessing from London Bridge by priests from the two churches on its opposite sides, and the ashes of the deceased strewn from Southend Pier. Thames waters bathe an effigy of the Hindu god Ganesh, anoint mass Christian baptisms, and carry a solitary Druid in his homemade coracle. On grassy banks and muddy foreshores, fishermen sit, teenagers drink, mudlarkers scrabble for treasure and pagan worshippers dance. In Oxford, where the Thames goes by the name of Isis, a college rowing team marks victory by burning their boat. Seen through Dewe Mathews’s lens, these multifarious river encounters appear both contemporary and timeless. As per the book’s title, she logs the exact time, GPS location, weather and tidal conditions when each photograph was taken but then frequently complicates this fixed precision by presenting sequences of images that offer multiple viewpoints on a single subject. The format of the book reflects this fluidity: the photographs roll and overlap across French folded pages, organised in geographical sequence but also, like the Thames itself, not conforming to fixed parameters. Now there is an extra poignancy to many of these pre-pandemic images which stand as a reminder of a time when commuter crowds seethed over London Bridge and people could come together in jostling mass gatherings. No one is more aware of the fluctuations of the Thames and its rich historical narratives than the quaintly named mudlarkers, the bands of hobbyists photographed by Dewe Mathews scouring the river’s edges at Putney Bridge and on the South Bank for objects of interest and value. The foreshore may currently be off limits under lockdown, but there is much vicarious mudlarking currently to be had, courtesy of architect and mudlark Jason Sandy, whose new book, Thames Mudlarking: Searching for London’s Lost Treasures, reveals the sheer wealth of objects preserved in the river’s anaerobic (oxygen-free) clay and exposed at its low tides. All the many histories and prehistories of the Thames are here: from a three-million-year-old Megalodon tooth and Neolithic flints to a Roman sword and medieval pilgrim badges, as well as an abundance of ordinary but equally revealing objects—pins, coins, clay pipes, rings, children’s toys, an 18th-century Georgian dandy’s cufflink and contemporary terracotta Hindu Diwali lamps.

Water cureOne art-world mudlarker whose finds are illustrated in Sandy’s book is Florrie Evans, whose job as director at the Weiss Gallery in London’s Piccadilly enabled her to identify the face on a cast pewter button as an exact match of a 16th-century portrait of Edward VI by William Scrots hanging in the gallery. Now Evans is using her more recent finds to feed into her new job heading up the London branch of the Fine Art Society, which specialises in work from the 19th and 20th centuries. As one of the gallerists who contracted Covid-19 while at Tefaf Maastricht last year, Evans found the experience of sorting through her mudlarking finds especially therapeutic during her illness, stating: “They offered a distraction from how sick and panicked I felt, especially when I couldn’t breathe properly. It was reassuring thinking about other lives and the passing of time.” In so many ways, it seems we are repeatedly using the time and tide of the Thames in order to help us navigate and gain perspective on our own turbulent era.