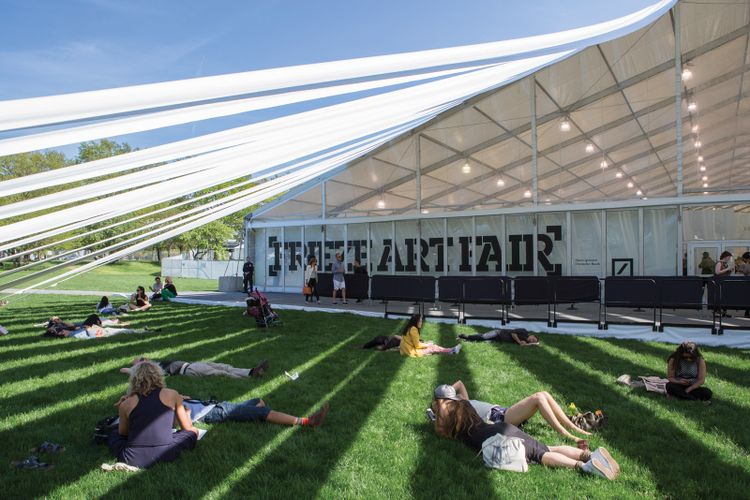 
New York’s springtime climate is fickle. This could be said as much for its weather as it could its art market. That is a lesson Frieze has learned the hard way as speculation around the future of its New York fair, the eighth edition of which opens on 2 May, continues to swirl, especially since the arrival of Tefaf New York Spring in 2017, which is held concurrently.

After a few rough years, beset by flooding in 2017 and a ventilation breakdown in the midst of a heatwave in 2018, Frieze New York’s exhibitor list is down from 190 in 2018 to 180 this year. While that loss might seem marginal, galleries of all sizes—Blum & Poe, Anton Kern, Albertz Benda, Castelli Gallery, Chateau Shatto, Esther Schipper and Gavin Brown’s Enterprise, to name a few—are among those not returning this year. Some of the more established have decamped from Frieze’s tent on Randall’s Island for the Park Avenue Armory, where Tefaf has established itself as an air-conditioned bastion of consistent quality.

Perhaps the most notable of those to shift venues is Pace gallery, which is not participating in Frieze New York for the first time since 2015. “There’s not one particular reason why we’ve decided to participate in Tefaf this year—the fair has seemed to find its natural footing in the New York ecosystem over the last couple of years, and the time felt right for us to explore this platform,” says Marc Glimcher, Pace’s president and chief executive. The gallery will dedicate its stand to works by Jean Dubuffet, while live stagings of the Art Brut artist’s Coucou Bazar performance will run through the course of the fair.

“Our decision-making around all fairs, not just Tefaf or Frieze, has become increasingly precise,” Glimcher says. “We’re driven to find the right balance and mix for us and our artists, which we see as something that can and should evolve over time.”

Other international galleries such as Skarstedt, Almine Rech and Kamel Mennour are also exhibiting with Tefaf despite having participated in Frieze New York in 2018. All cite Tefaf’s location as a motivating factor. “The Upper East Side location is convenient for our collectors from New York and abroad, not to mention close to our gallery space, which will hopefully encourage collectors to visit the fair more than once despite the busy week,” Rech says.

Indeed, the Randall’s Island location of Frieze New York, accessible only by car, ferry ride or multiple transfers between subways and buses—a practice even the most intrepid New Yorkers abhor—has been a point of contention for years, leading many to claim it is a “one-day fair” since few visitors make the journey more than once. Some dealers still think it is worth the trek, such as Sean Kelly, who participates in both Frieze and Tefaf this May.

“I want to support any New York fair—the diversity they offer is important in a city like this that serves as a huge motor in the marketplace,” Kelly says, adding that he believes Frieze offers a lot of visibility for younger artists, which is why he will feature highlights from his contemporary programme there while showing a Laurent Grasso-curated selection of works dating as far back as an 1867 Manet drawing at Tefaf.


Freshly shucked oysters were one of the many luxuries provided at Tefaf’s 2018 New York fair, in addition to air conditioning
Photo: Kirsten Chilstrom. Courtesy of TEFAF


Kelly acknowledges, however, that the location and tent structure has worked against Frieze. “To be fair to it, Frieze has suffered everything but a plague of locusts in the last few years here,” he says, noting that many were left irreconcilably disgruntled after last year’s aircon breakdown. Frieze offered its exhibitors a partial refund of 10% after a number of dealers complained that the tent temperatures—which registered above 30C by some accounts—affected their sales. Chicago-based dealer Shane Campbell even filed a class-action lawsuit against the fair group claiming gross negligence, a case which remains open, active and contested by Frieze in the New York courts. While Kelly says he does not know of plans for the fair to move, he says he wouldn’t be surprised if it did.

Indeed, when the inaugural edition of Frieze Los Angeles was announced last year, many suspected the group might be foregoing its New York fair. The general success of the first LA iteration in February has further fuelled these whispers, though a spokesman for the fair has said there are currently no plans to leave New York. Exhibitors and visitors at Frieze LA praised its central location at Paramount Studios and smaller size—at 70 booths, it was under half the size of its New York and London editions.

The smaller scale of Tefaf New York appeals, too—at 90 exhibitors, Rech says its “intimate” scale “allows collectors to spend time and engage with the works.” Indeed, nearly all of the dealers contacted said Tefaf’s smaller size was a major draw.

One London-based dealer returning to Frieze New York this year says that what keeps larger fairs like Frieze and Art Basel running is the pressure on smaller galleries to be part of a bigger “brand” as the marketplace continues to be dominated by mega-dealers like Gagosian and David Zwirner. Overall, however, the preference for smaller fairs is palpable and Sean Kelly points to the activities of Magnus Renfrew: “He has now created two boutique art fairs in Taipei and Singapore, with around 80 exhibitors. We did Taipei and it was very successful for us—the same with fairs of the same size here like ADAA’s The Art Show and now Tefaf. It’s a good model for the future.”