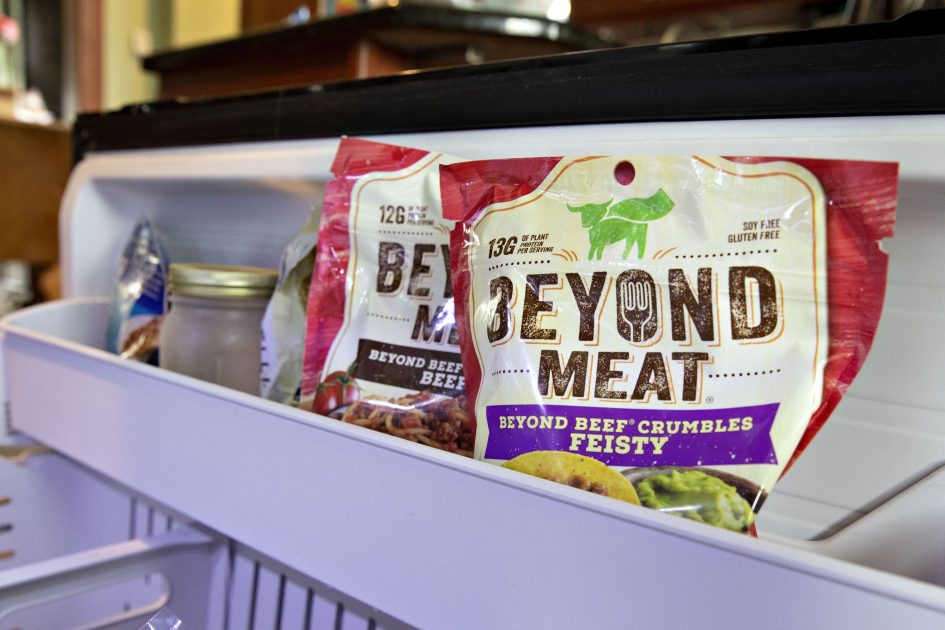 Beyond Meat shares fell sharply in extended trading Monday on news the company would embark on a secondary offering of 3.25 million shares only three months after its IPO. That report followed the release of mixed second-quarter results and a raised 2019 revenue forecast.

Shares of the company fell more than 13% in extended trading, hovering around $191 a share. The stock closed Monday up 788% since its May initial public offering. Shares initially rose on the earnings report, then fell sharply after the stock offering was announced.

Shareholders plan to sell 3 million shares, while 250,000 shares will be offered by the company itself. Based on Monday’s closing price of $222.13 per share, the offering could raise $721.9 million for Beyond and selling shareholders. Beyond will not receive any proceeds from the stock investors are selling, but it will earmark the proceeds of the stock it’s selling to expand product and supply, marketing and for general working purposes.

Executives on an earnings conference call declined to comment further on the offering. According to regulatory filings, CEO Ethan Brown plans to sell 39,130 shares, which could net him $8.7 million. CFO Mark Nelson is planning to sell 55,530 shares, potentially earning $12.3 million from the sale.

Here’s what the company reported compared with what Wall Street was expecting, based on a survey of analysts by Refinitiv:

The company has seen robust demand for its products, but it will need to continue to invest to ramp up production.

The company is expecting its second and third quarters to be its strongest and is forecasting higher revenue in the third quarter. With increased demand due to the start of grilling season, executives said that the company has been faring much better than previous years when it comes to supply shortages. Still, Brown said that from time to time, there could be some “very short-lived outages” on a particular product.

Beyond raised its fiscal 2019 outlook for revenue and expects to net sales for the full year to reach $240 million. Last quarter, in its first report since its May initial public offering, the company said that it was forecasting fiscal 2019 revenue of $210 million, a number that did not include sales from restaurants that were only testing the product.

“We’re being very conservative and viewing this as a floor,” Brown told analysts on a conference call in June.

Since then, Tim Hortons has rolled out Beyond Meat’s imitation sausage and burgers to its stores in Canada. The company also nabbed a deal with struggling meal kit provider Blue Apron. Dunkin’ has begun rolling out a breakfast sandwich made with Beyond Sausage, starting with its Manhattan stores. Sales from its Tim Hortons burger and the Dunkin’ sandwich are not included in the 2019 forecast yet.

But there have been some notable holdouts when it comes to offering vegan products from Beyond and its rival Impossible Foods, including McDonald’s. McDonald’s CEO Steve Easterbrook has said that the fast-food chain is waiting to better understand the long-term foot traffic patterns from a plant-based burger.

Sales to restaurants and foodservice made up slightly less than half of Beyond’s revenue this quarter. The company reported that $33.1 million of its net sales came from that side of its business.

Its retail business saw net sales of $34.1 million during the quarter. In June, the company launched a “meatier” version of its vegan Beyond Burger in grocery stores, as well as a plant-based ground beef product. The update to the recipe came as traditional food companies like Nestle and Tyson Foods announced their own plant-based products. Impossible is also planning on bringing its burger to grocery stores later this year.

“I’m not sure that we’re all selling to the same customer,” Brown said. He noted Beyond has stayed away from genetically modified ingredients, while Impossible genetically engineers yeast to create heme, the iron-containing molecule that gives meat its taste and aroma.

Beyond has come under fire from critics for being too processed. Chipotle CEO Brian Niccol said last week that plant-based products from Impossible and Beyond are too processed to be on the chain’s menu, prompting Brown to invite him and other naysayers for a tour of Beyond’s manufacturing facilities.

Beyond Meat products are now available in 51 countries, and Brown said that the company is continuing to expand internationally.