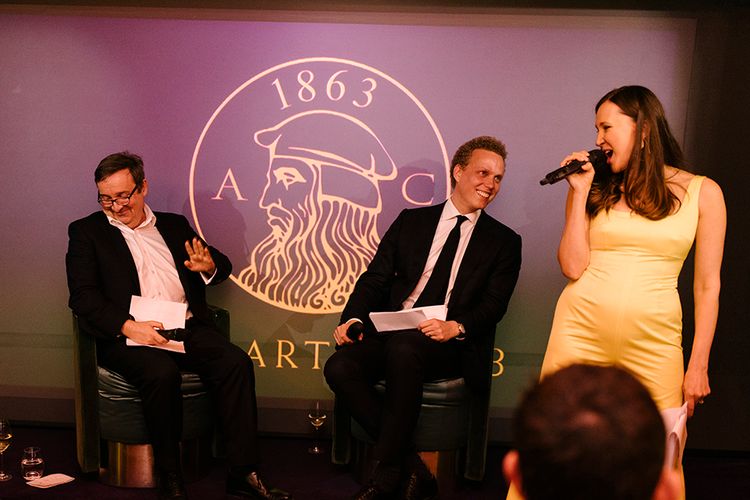 
It was fingers on buzzers on Tuesday night as the art world gathered at Dover Street’s Arts Club. Here, teams of curators, collectors, gallerists and museum directors racked their brains and aired their knowledge (or lack of it) at the annual Arts Club Quiz, which this year was raising funds for the UK contemporary arts centre Nottingham Contemporary. Presiding over this famously cacophonous event as the mistress of ceremonies was the formidable art entrepreneur Maria Baibakova, who laid down the disciplinary gauntlet from the outset declaring: “I’ve just become a mum and I’m on a very short fuse!”

Assisting her as joint quizmasters were the Tate’s director of international collections Gregor Muir and Sotheby’s head of contemporary art Alex Branczik, with the trio occasionally bamboozling the throng with such ticklish questions as the correct date of Yayoi Kusama’s Japanese Pavilion at the Venice Biennale (1993) and the location of the Barbed Wire Museum (Kansas).

Despite some boisterous behaviour resulting in a temporary banishment to the naughty corner, the overall winners were the Salon des Refusés, headed up by the David Zwirner senior partner Angela Choon, who had gathered a formidable lineup including the director of the National Portrait Gallery Nicholas Cullinan, the Chisenhale Gallery director Polly Staple and the Whitechapel Gallery’s chief-curator Lydia Yee.

However, Choon’s most impressive team member was undoubtedly Tate Modern’s contemporary art curator Mark Godfrey who can now add telepathy to his portfolio of skills, having correctly answered a question before it was even uttered. To the question, “who was the first… ?”, he fired back with “Louise Bourgeois!”, before the quizmasters had even had a chance to complete with, “….artist to make work for Tate Modern’s Turbine Hall?”

On receiving the first prize of a credit with footwear designer Nicholas Kirkwood, Choon promptly donated it to the Robin Hoods, the director of Nottingham Contemporary Sam Thorne’s team, who thus became the double-whammy winners of the evening as the now literally well-heeled beneficiaries of the £8,000 total raised by the event.