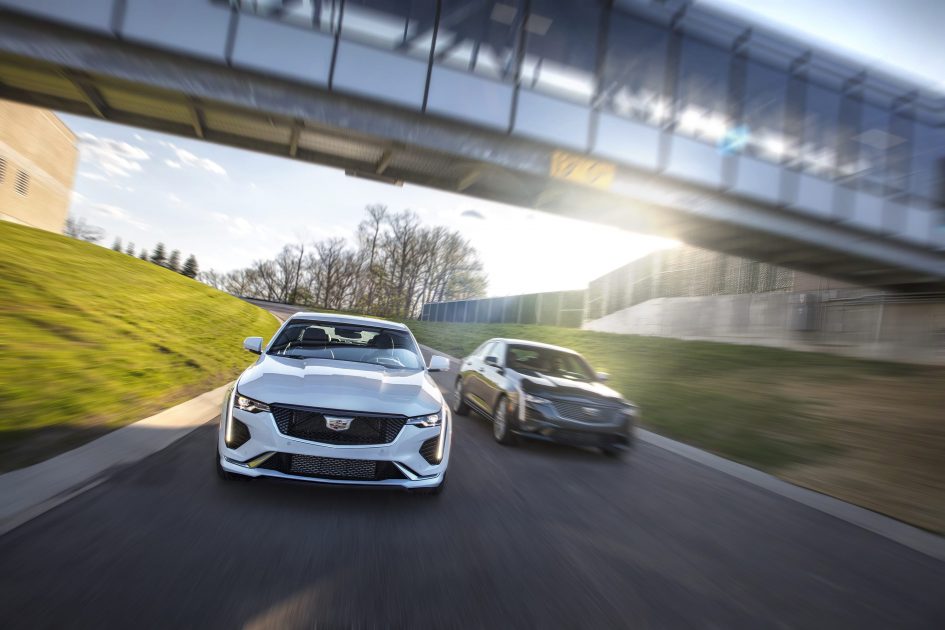 Cadillac unveiled the CT4 Sport and Premium models on Sept. 12 via Instagram.GMDETROIT – Cadillac on Thursday used Instagram to unveil new models of the 2020 CT4, a subcompact sedan the brand hopes will assist in attracting a younger, sportier demographic.Ordering for the CT4 will begin later this year with vehicles arriving in dealerships in the first quarter of 2020. The car will go on sale alongside the new Cadillac CT5 compact sedan, which is scheduled to arrive in dealerships this fall. Pricing for the cars has not been announced.Both rear-wheel-drive sedans will arrive at a precarious time, as car sales continue to decline amid consumer preference moving toward crossovers and SUVs. But the General Motors luxury brand has continued to remain bullish on the market for small, sporty cars such as the CT4 and CT5.”We developed CT4 to appeal to youthful buyers in the luxury market who may be new to the Cadillac brand,” Andrew Smith, executive director of global Cadillac design, said in a release.The CT4, like the CT5, will offer Cadillac’s Super Cruise driver-assist system that enables hands-free driving on highways beginning next year.The CT4 Sport and Premium Luxury models, which were unveiled Thursday through an interactive Instagram story, will come standard with a 2.0-liter twin-scroll turbocharged engine rated at 237 horsepower and 258 lb.-ft of torque. An optional 2.7-liter turbocharged engine estimated at 309 horsepower and 348 lb.-ft of torque is available on the Premium Luxury trim.For those seeking more power, Cadillac also is offering two performance variants of the CT4 to better compete against German luxury brands Audi, BMW and Mercedes-Benz that dominate the luxury small car segments in the U.S.The base CT4-V performance variant, which Cadillac unveiled this summer in Detroit, is equipped with the same optional 2.7-liter turbo engine but it comes standard with an estimated 320 hp and 369 pound-feet of torque. Cadillac has not announced performance specifications for the highest performance model.Cadillac CT4 Premium Luxury modelGMAside from performance, the most noticeable differences between the CT4 models is the amount of chrome and stylings of the grilles. The Premium Luxury model features a shimmering grille, while the Sport and performance variants feature blacked-out mesh grilles. All models include the brand’s signature vertical lights at all four corners of the car.The Instagram unveiling is the start of a social media campaign for the CT4 that “virtually puts viewers in the driver’s seat simulating the car’s liberating drive experience,” according to Cadillac. The campaign will continue for several weeks with other posts on Instagram as well as other social media platforms such as Twitter and YouTube.”Because the CT4 is equal parts technology and performance, we wanted to reveal it in a way that would stimulate the senses and evoke emotions our customers might feel when behind the wheel,” Melissa Grady, Cadillac’s new chief marketing officer, said in a release.The CT4 and CT5 will be manufactured at GM’s Lansing Grand River facility in Michigan, which received a $211 million investment to build the next-generation sedans. The cars indirectly replace the CTS midsize and ATS compact sedans for Cadillac.