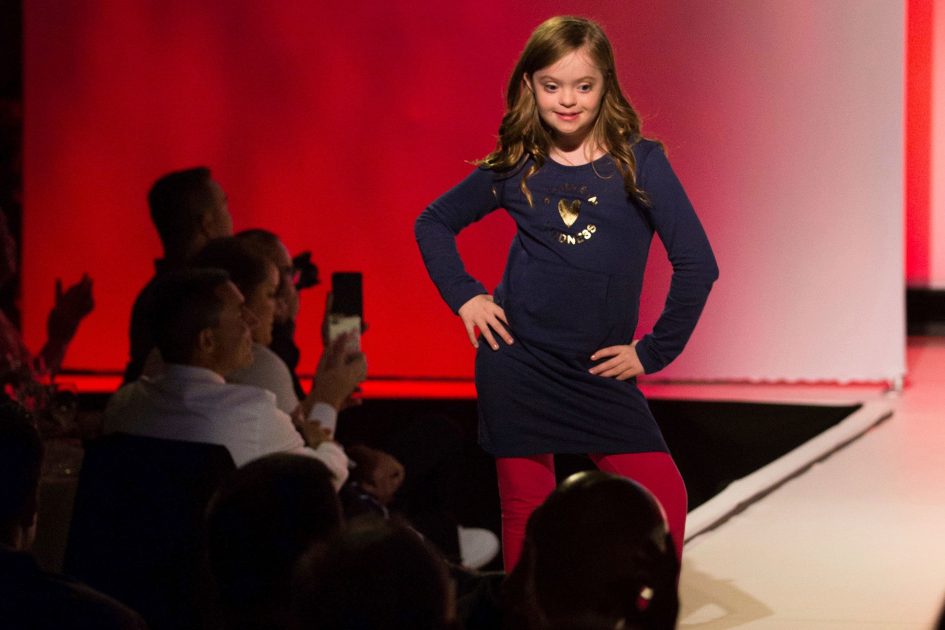 A model poses at the Runway of Dreams fashion show during Fashion Week in New York.

When Mindy Scheier’s son Oliver came home from school in 2014, the then-eight-year-old told her he wanted to start wearing jeans like his friends. It might seem like a common request, but for Mindy there was a challenge: Oliver has a rare form of muscular dystrophy, which causes physical disabilities.

“When he first started going to school, we decided he would just wear sweatpants everyday,” Scheier said. But doing this “made him feel like he was dressing disabled.”

So she picked up her scissors. Scheier, a fashion designer, cut up a pair of jeans and added velcro so Oliver could comfortably wear them. When he put them on, “he felt so good about himself,” she said, “he felt like every other eight-year-old kid.”

Scheier said that at the time there were no mainstream, fashionable options for people with disabilities.

Scheier founded Runway of Dreams Foundation, a nonprofit working to make fashion more accessible for people with disabilities, and partnered with Tommy Hilfiger in 2016 to launch a line of adaptive clothing for children. It wouldn’t be the last apparel retailer to enter the space.

In 2017, Target added adaptive apparel made specifically for kids and toddlers with disabilities to its children’s line Cat & Jack. The same year, Zappos launched Zappos Adaptive on its website, where it began selling sensory-friendly clothing. Most recently, in June Kohl’s announced that it will introduce adaptive apparel to its three largest children’s brands. Kohl’s clothing will have features including abdominal access, wheelchair-friendly options and sensory-friendly options, like shirts with flat seams, which are designed specifically for children with autism or sensory processing disorder so they don’t feel the clothing pinch or rub too hard against their skin.

“This new assortment is a direct response to an unmet customer need and will allow us to better serve our customers and their families,” Doug Howe, Kohl’s chief merchandising officer, said in a written statement to CNBC. “Our product development teams took great care in thoughtfully designing features for ease and functionality, while ensuring every product had the same quality and style that our customers love.”

Scheier said there are three main things designers can do to make their adaptive clothing work for children with disabilities. They can replace closures — like zippers and buttons — with easier ways to close garments like magnets. They can make products adjustable so wearers don’t need to spend money on tailoring. (Scheier found those with disabilities were spending almost double on clothing because of adjustment costs.) They can provide alternate ways to get the clothing on and off the body, like extra slots for limbs to fit through.

For Mandy Shaw, whose eight-year-old son is a quadriplegic with a distorted pelvis and legs caused by a brain hemorrhage that happened when he was four, Target’s Cat & Jack adaptive line has made a huge difference.

“You already get stares when you have a kid in a wheelchair,” said Shaw, who lives just outside Nashville. “It’s just nice to see my kiddo wearing regular clothes. He just blends in with everyone else in his class or in his Sunday School.”

One reason Shaw turned to Cat & Jack was because she found Target’s adaptive line to be reasonably priced.

Julie Guggemos, senior vice president of owned brand management and product design at Target, said adaptive apparel can be extremely expensive. To keep its prices down, Target manufactures clothing in large quantities and leverages fabric it already had in production. Most recently, the retailer unveiled adaptive Halloween costumes, including a princess costume with a wheelchair cover that looks like a carriage.

When Target launched the adaptive line, Guggemos said the retailer gathered insight from shoppers, experts and organizations, including Pageant of Hope, which hosts beauty pageants for children with disabilities, and the National Federation of the Blind.

Zappos also sought guidance. The online retailer established an advisory council for its adaptive line. Scheier of Runway of Dreams is on the council, along with experts in the disability space and brand executives.

Zappos also hears from parents and children about how the adaptive clothing has impacted their lives. A parent once wrote in that their child was able to put on a shirt on their own for the first time, said Molly Kettle, director of Zappos Adaptive.

“It changes a life,” Kettle said. “We get to hear from people daily about how these clothing options make their life better.”

But there is still a ways to go to make the clothing industry fully inclusive of children with disabilities.

“It’s the education piece that the companies need to spend some time on in terms of understanding the enormity of this population,” Scheier said, adding that she spends a lot of time dispelling myths about disabled people to companies, including that they are a niche market, don’t have spending power and don’t care what they look like.

“It’s much easier to find clothing for dogs than for people with disabilities,” Scheier said. “But we’re moving in the best direction possible.”

Cost and accessibility are also concerns.

“This is a situation where, taking the non-compete out of the organization, everyone should do a part in making adaptable apparel accessible,” Guggemos said. “I would love to see everyone working together to create products that meet the needs of all consumers.”

(Correction: A photo caption in this story has been updated to say the model was at the Runway of Dreams fashion show. The foundation does not have a fashion collection.)