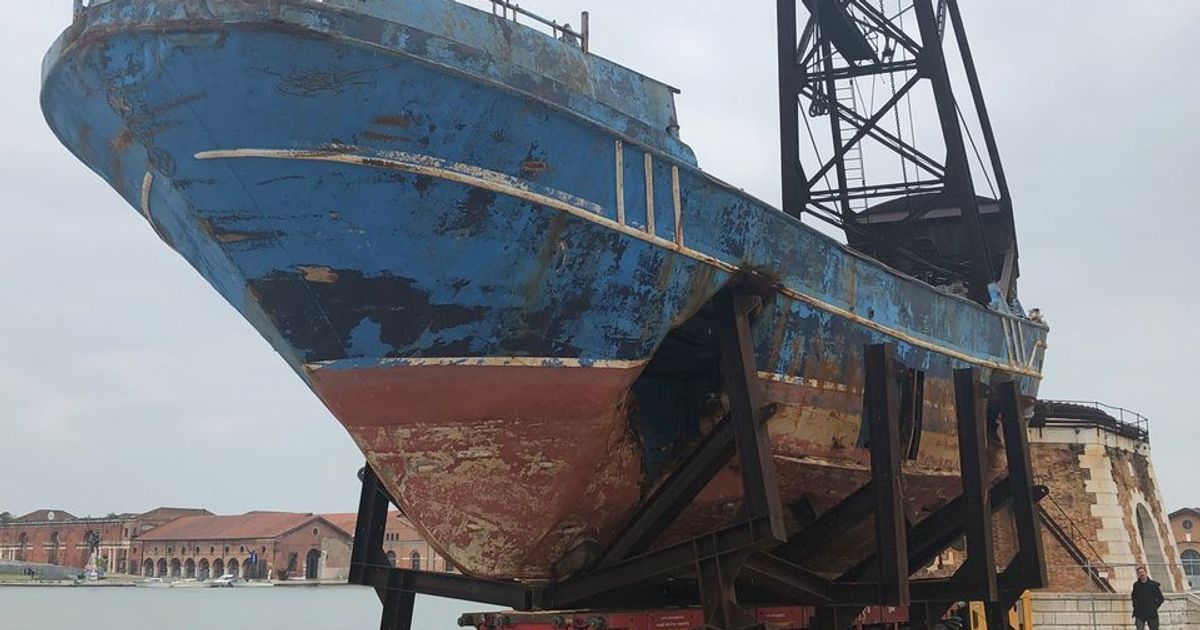 At the Venice Biennale, the artist Christoph Büchel displayed a wrecked ship in which an estimated 1,000 migrants had died
© The Art Newspaper

The wrecked fishing ship controversially exhibited by the Swiss-Icelandic artist Christoph Büchel at the 2019 Venice Biennale as an installation titled Barca Nostra has finally been returned from Venice to the Sicilian town of Augusta, its legal owner, according to a report by the New York Times.The ship became a deadly symbol of the Mediterranean migration crisis after capsizing off the coast of Libya on 18 April 2015. An estimated 1,000 migrants were on board, attempting to cross the Mediterranean Sea into Europe; only 28 survived.The Italian government recovered the vessel in June 2016 in a forensic investigation to identify the victims, and it was later saved from the scrapyard by the municipal council of Augusta. Local officials and a citizens’ group known as the Comitato 18 Aprile ultimately intend to create a memorial garden dedicated to the tragedy that will incorporate the wreck.In 2019, the town council signed a contract with Büchel to allow the artist to borrow the ship for one year for display in Venice’s Arsenale, the historic shipyard turned exhibition venue. The agreement “stipulated that all the costs of transporting the boat to Venice and then returning it to Sicily were to be met by the artist”, a Biennale spokeswoman told The Art Newspaper last December. But a dispute erupted over delays to the boat’s return journey to Augusta—attributed by sources close to the Barca Nostra project to structural damage to the supporting cradle. In December, more than a year after the 2019 Biennale concluded, the institution and the Sicilian municipality called on Büchel to honour his commitment to transport the vessel back to Augusta. Now, the New York Times reports that the wreck was moved by barge and tugboat from Venice one week ago, arriving in Sicily on Tuesday. It is expected to undergo maintenance before the town and the Comitato 18 Aprile proceed with plans for the “garden of memory”.“Certainly, the ship has attained an international dimension and we want this garden to become a place of reflection for the world, so that all people can ponder,” Giuseppe Di Mare, the mayor of Augusta, told the newspaper.

Some New York museums will ramp up to 50% visitor capacity next week under relaxed limits announced by governor
Peabody Essex Museum enlists its former deputy director to assume the top post
To Top
error: Content is protected !!
Top