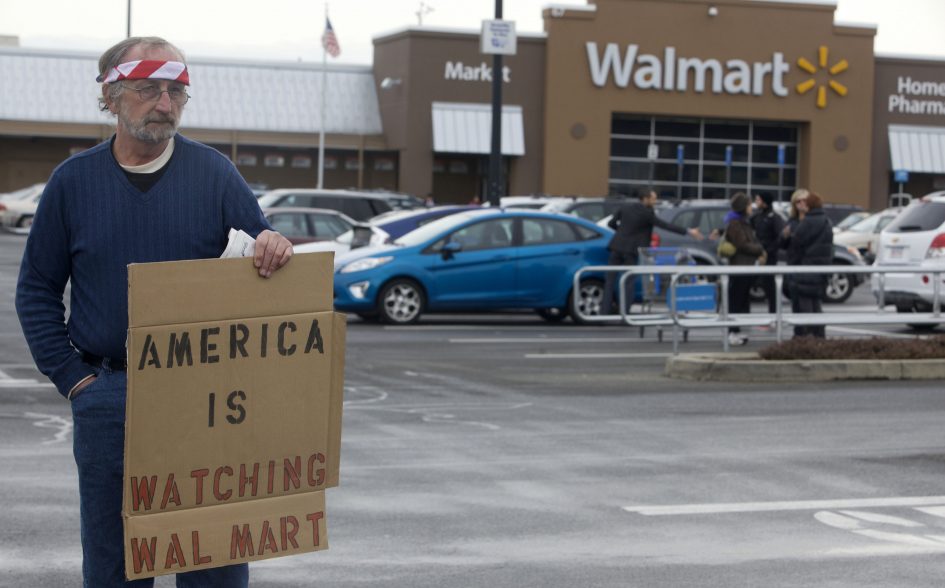 Joseph Barbarito holds a sign as he waits for protesters to deliver a petition to Walmart in Danbury, Connecticut January 15, 2013. The petition was signed by about 300,000 citizens nationwide urging Walmart, the nation’s largest gun retailer, to halt sales of assault weapons and munitions nationwide.

As more people die from mass shootings, some companies are beginning to list active shooter scenarios as a potential risk factor for their business in their annual reports.

Companies like Del Taco Restaurants and Dave & Buster’s have added language that refers to active-shooter situations in the “risk factor” section of their most recent annual reports filed with the Securities and Exchange Commission, according to analysis of regulatory filings by the Wall Street Journal.

That section of regulatory filings includes potential catastrophes like natural disasters and terrorism alongside other risks like rising labor costs and strong competition.

Since 2016, The Cheesecake Factory has warned investors about active shooter situations as a risk factor in its annual reports.

“Acts of violence at or threatened against our restaurants or the centers in which they are located, including active shooter situations and terrorism, could unfavorably impact our restaurant sales, which could materially adversely affect our financial performance,” the Cheesecake Factory said in its latest annual report.

The Cheesecake Factory declined to comment. Del Taco and Dave & Buster’s did not immediately respond to a request for comment.

The number of people killed by active shooters has been on the rise in recent years. The Journal reported that active shooter incidents have resulted in 306 fatalities between 2016 and 2018.

Two mass shootings in the last week have resulted in 31 deaths. A massacre at a Walmart store in El Paso, Texas left 22 dead. Walmart did not refer to “active shooters” as a potential risk in its most recent annual report, filed March 28. It does list terrorist attacks as a risk that could affect its operations and financial performance. Walmart did not immediately respond to a request for comment.

Read more about how companies are quietly warning investors about how gun violence can affect their business here.