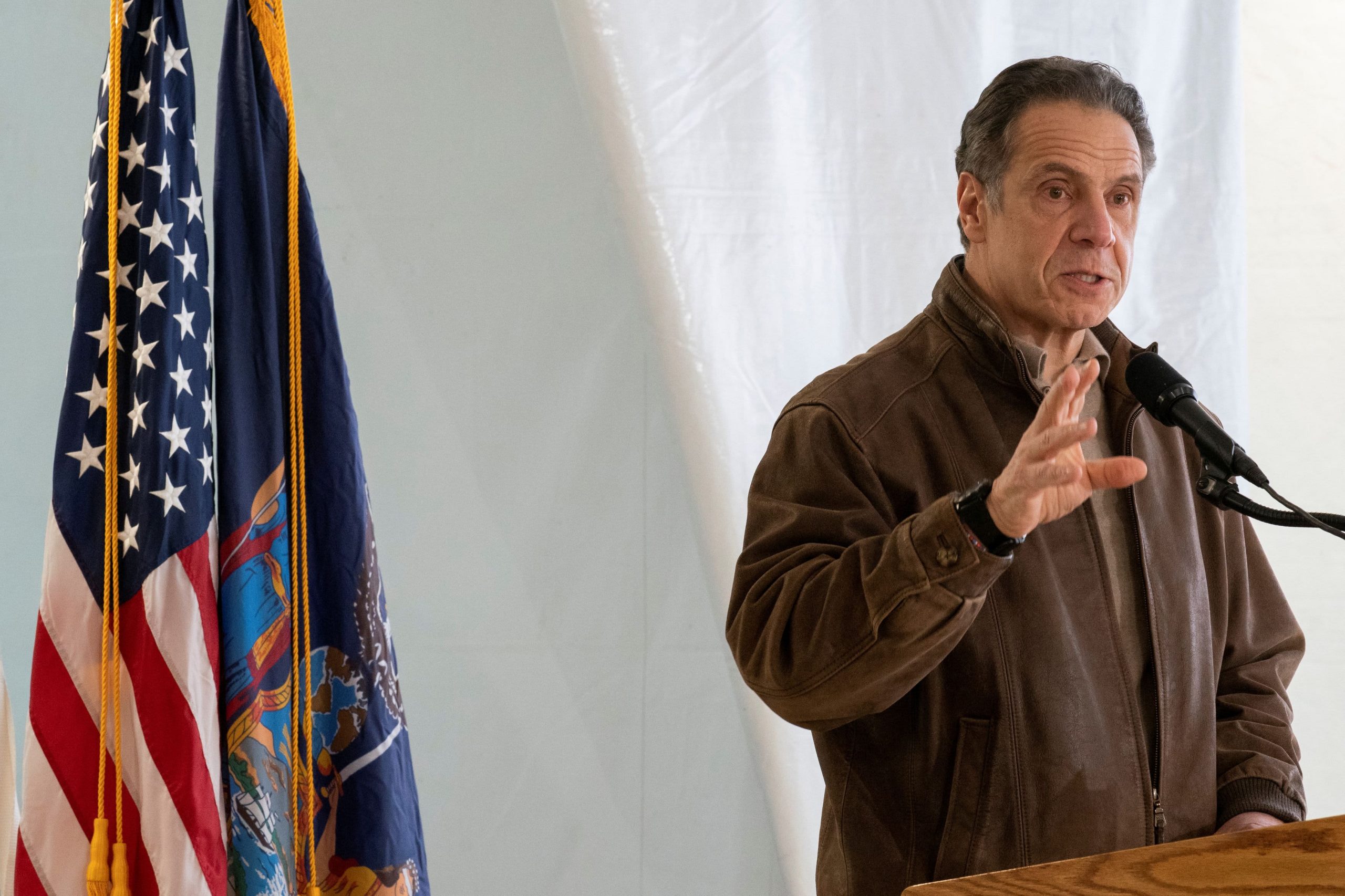 New York Gov. Andrew Cuomo speaks to reporters during a news conference at a COVID-19 pop-up vaccination site in William Reid Apartments in Brooklyn, New York City, U.S., January 23, 2021.Mary Altaffer | ReutersNew York Gov. Andrew Cuomo on Sunday backed off his plan to appoint a former federal judge, who has a close connection to one of the governor’s top advisors, to oversee an investigation of sexual harassment allegations against him.The Cuomo administration said it will ask New York state attorney general Letitia James and Janet DiFiore, chief judge on the state’s highest court, to choose who will oversee an independent probe. The decision would help “avoid even the perception of a lack of independence or inference of politics,” Beth Garvey, special counsel to Cuomo, said in a statement.”We will leave all decisions concerning the investigation to be made in the discretion of the independent counsel selected by the Attorney General and Chief Judge,” Garvey said. James, in a statement Sunday, said she was ready to oversee an investigation and make any necessary appointments. However, she said this can only be done through an official referral from the governor’s office, and must include subpoena power. “I urge the governor to make this referral immediately,” James said. The governor’s reversal comes after a slew of Democrats criticized the governor’s initial pick to lead a review and called for an independent probe of allegations after a second female aide came forward to accuse Cuomo of sexual harassment. Some Democratic lawmakers also joined some Republicans to call on Cuomo to immediately resign.Cuomo’s office initially said it would choose former federal judge Barbara Jones to lead the review. Jones had worked with Cuomo’s top adviser Steven Cohen.The calls for an independent investigation follow a New York Times report published on Saturday evening that described the accusations of Charlotte Bennett, a 25-year-old former aide to the governor, who said Cuomo had asked her about her sex life and whether she was monogamous in relationships and had ever “been with an older man.”It was the second allegation against the governor in a week. Former aide Lindsey Boylan, a former state economic development official, detailed sexual harassment claims against Cuomo last week, including a kiss without her consent in his Manhattan office. Cuomo has denied Boylan’s accusations.Cuomo responded to Bennett’s allegations in a statement on Saturday, saying he intended to serve as a mentor and “never made advances toward Ms. Bennett, nor did I ever intend to act in any way that was inappropriate.”Pressure from DemocratsWhite House press secretary Jen Psaki said Sunday Cuomo should face an independent review over both sets of allegations in an interview on CNN, adding that it’s something President Joe Biden supports and “we believe should move forward as quickly as possible.”A spokesperson for Sen. Chuck Schumer, D-N.Y., said the senator believes the allegations “should be thoroughly and independently investigated.” Sen. Kirsten Gillibrand, D-N.Y., also called for an “independent, transparent and swift investigation into these serious and deeply concerning allegations.”Rep. Alexandria Ocasio-Cortez, D-N.Y., joined other Democrats in calling for an independent probe of the governor that is not led by someone Cuomo has chosen, but rather by the state attorney general.”Lindsey Boylan and Charlotte Bennett’s detailed accounts of sexual harassment by Gov. Cuomo are extremely serious and painful to read,” Ocasio-Cortez wrote in a tweet Sunday morning. “There must be an independent investigation — not one led by an individual selected by the Governor, but by the office of the Attorney General.”The new allegations also come after a report in January that Cuomo’s administration failed to report thousands of Covid-19 deaths in the state’s nursing homes.New York Mayor Bill De Blasio, a Democrat, said on Sunday that the state legislature must immediately revoke Cuomo’s emergency powers that overrule local control and called for two separate independent probes into the sexual misconduct allegations and the undercounting of deaths at nursing homes.”New Yorkers have seen detailed, documented accounts of sexual harassment, multiple instances of intimidation, and the admitted withholding of information on the deaths of over 15,000 people,” De Blasio said in a statement. “Questions of this magnitude cannot hang over the heads of New Yorkers as we fight off a pandemic and economic crisis.”New York state Sen. Alessandra Biaggi commended the two women for coming forward with their allegations and called on the governor to resign in a statement posted on Twitter Saturday evening.”The harassment experienced by these former staffers is part of a clear pattern of abuse and manipulation by the governor, and that pattern makes him unworthy of holding the highest office in New York,” Biaggi wrote.Republicans also renewed calls for Cuomo to resign following the second allegation, including Rep. Elise Stefanik, R-N.Y., who in a statement on Saturday called the governor a “criminal sexual predator” and said he must resign immediately.