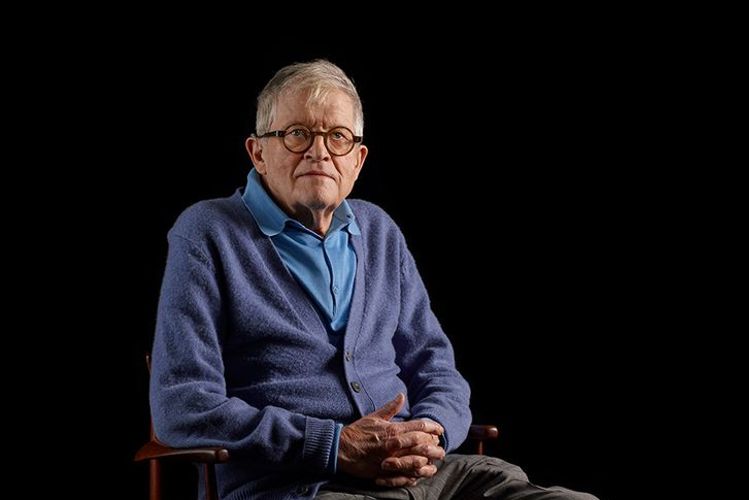 
The Yorkshire-born painter David Hockney has been named an “icon” by Time magazine, which yesterday published its list of most influential people in 2019.

One of Britain’s most recognisable artists, last year Hockney entered the record books when his Portrait of an Artist (Pool with Two Figures) (1972) sold at Christie’s in New York for a record $80m ($90.3m with fees), making him the most expensive living artist at auction.

Speaking ahead of the auction, Hockney told The Art Newspaper: “I thought the painting was quite successful, it was in a show in New York and we sold it. I only did about 12 pool paintings, not that many. Other people would have churned them out.”

In a text for Time magazine, Edwin Becker, the head of exhibitions at the Van Gogh Museum in Amsterdam, also notes the importance of Hockney’s current exhibition at the Dutch institution: Hockney-Van Gogh: The Joy of Nature (until 26 May). “Hockney has always been inspired by a broad selection of well-known artists, and now, for the first time, his work is being displayed parallel to that of one of his muses, Vincent van  Gogh,” Becker writes.


Ever modest, Hockney says: “I mean, me and Van Gogh, there’s not much competition really. He could see very very clearly and he knew he could see clearly. I think I can see quite clearly, not quite like Van Gogh. But Van Gogh didn’t have many friends and I think he arranged that, that’s why in three years he did all that work.”

Becker also singles out Hockney’s pioneering use of the iPad as adding “a unique sense of spontaneity to his fascinating works”. For Hockney, the iPad was an entirely new medium. “I was one of the first to get an iPad,” he recalls. “As soon as they were out in California, I got one sent to Bridlington and I experimented with it for six months, and I got rather good on it then.

“I tried out every brush on the app and then I realised I could do The Arrival of Spring in 2011 on the iPad and I drew around 90, giving the account of the arrival of spring. It began with the snow on Woldgate and ends with all the blossom.”

In stark contrast to Hockney, Venezuelan-born Luchita Hurtado, who is the only other visual artist to be named by Time magazine, has never sold a work at auction and, at 98, is to have her very first solo museum show in London next month. This will be followed by a survey at the Museo Tamayo in Mexico City in 2020.

Writing for Time magazine, Hans Ulrich Obrist, the artistic director of the Serpentine Galleries where Hurtado has her show, says: “Revered by many artists, Luchita was connected through friendship and family to specific movements like Surrealism, the Dynaton movement and Magical realism, but she maintained her unique practice in private, rarely exhibiting her work. Now, at the age of 98, Luchita is finally getting the attention she has long deserved.”