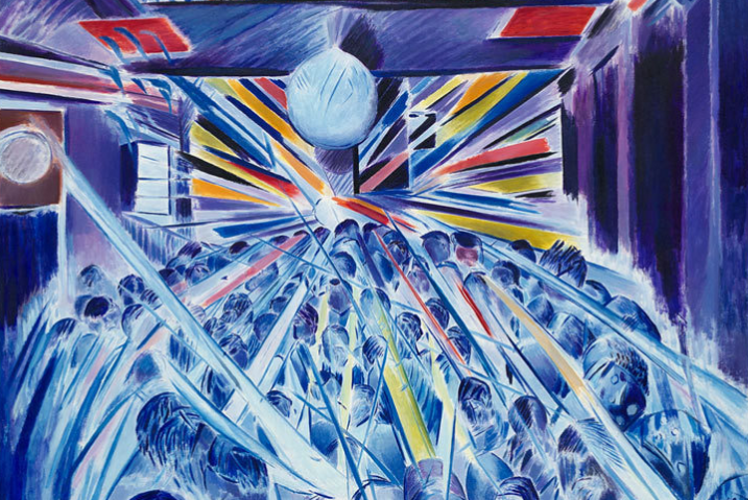 
London’s reggae and dub nightclub scene of the late 70s and early 80s is brought strikingly back to life in a 40-year retrospective of the dynamic, zingingly-coloured paintings of Denzil Forrester at Stephen Friedman Gallery. Speaking to the Institute of International Visual Arts (Iniva) director Melanie Keen at Wednesday night’s packed opening, Forrester said that he used to take his sketchbook into the all-night clubs of East London and make drawings in sync with the music, each one taking four to five minutes: “the length of a record—with the B-sides lasting a bit longer”. The energy and movement of these crowded venues, with their pulsating sounds, walls of speakers, rhythmic dancers and flashing strobe lights continues to feed into Forrester’s vivid paintings, even though he has now forsaken the buzz of the city for the more peaceful surroundings of Porthtowan, Cornwall.

Other less joyful aspects of London life at the time are also captured by Forrester, who was born in Grenada in 1956 and moved to London when he was 11 years old. Policemen loom in front of giant speakers in one of the club scenes and the death of the artist’s friend Winston Rose in police custody is the subject of a blue-hued painting of tumbling figures that also resembles a deposition from the cross. A large purple-toned work recalls Forrester’s early memory of making a living by sewing bags with his family in the basement of their Stoke Newington home.


Wednesday night, just as Forrester was standing in front of the painting and recounting his mother’s prowess as a seamstress to Melanie Keen, the family matriarch arrived in person to much applause from the crowd, which included Friedman artists Yinka Shonibare and Lisa Brice as well as Forrester’s old friend, the legendary dub poet Linton Kwesi Johnson. Later on the music in Forrester’s club paintings was brought emphatically to the fore when yet another major figure from the period, the film director, DJ and musician Don Letts—the man instrumental in fusing punk with reggae—did a stint on the decks at the after party. (Although sadly the London art crowd was rather more sedate in its moves than the revellers in Forrester’s paintings)

And Wednesday’s London triumph of sound and vision is just the beginning of a long-overdue upsurge in attention for Forrester, who is considered by his friend and early champion Peter Doig to be “one of the most important painters to come out of the 1980s… whose work remains as vital and relevant as it was then”. This September sees the unveiling of a large scale work—which also features a police presence—commissioned for Brixton Underground station by Travel For London. There will also be a major solo exhibition of new works at Nottingham Contemporary opening in January 2020.

How did Salvator Mundi go from $1,000 to $450m? Plus, the tragedy of Van Gogh’s only love
Ralph Rugoff is creating a Venice Biennale for right now
To Top
error: Content is protected !!
Top