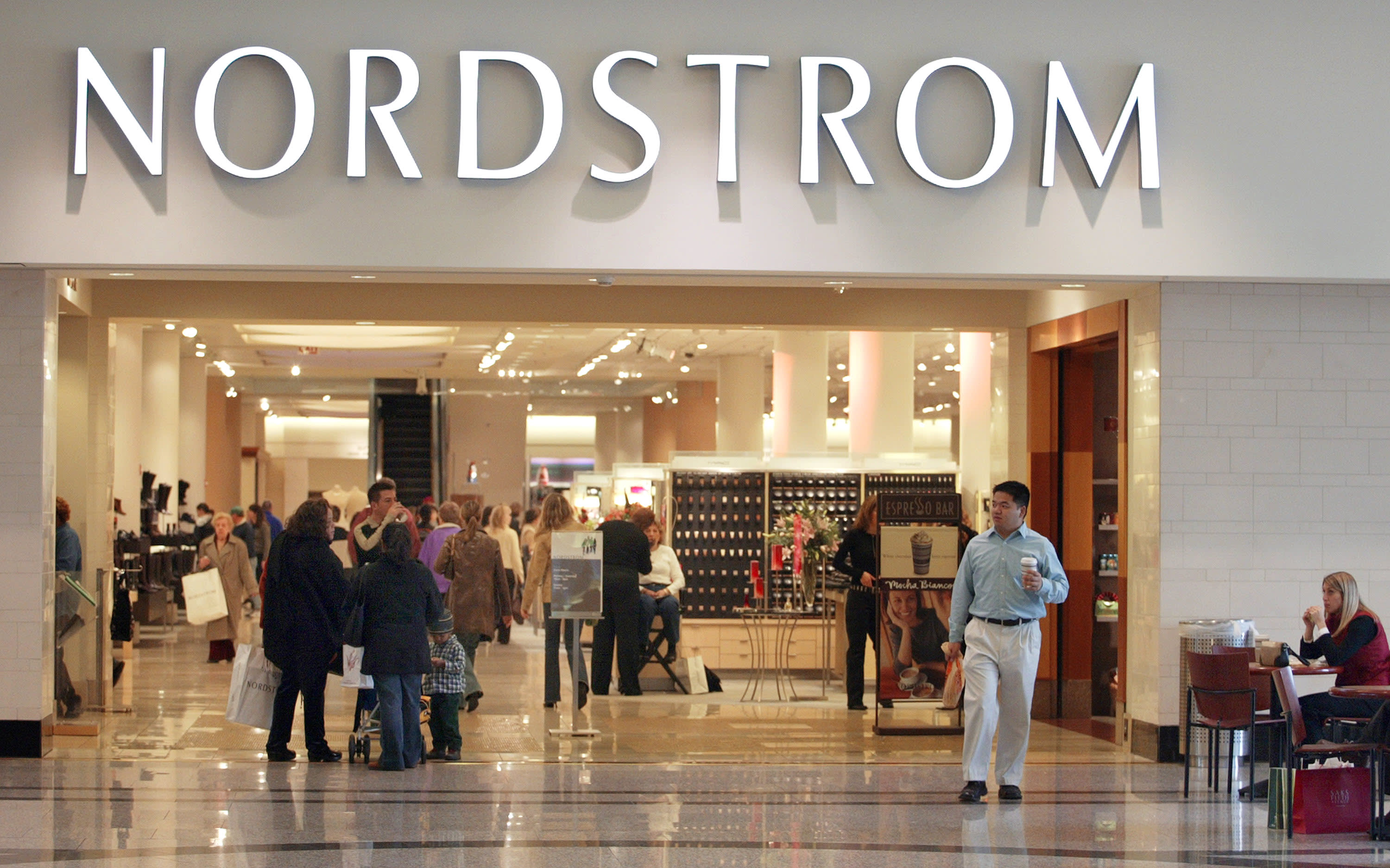 CHICAGO – NOVEMBER 21: Nordstrom signage is visible at its store November 21, 2003 in Chicago. Nordstrom, Inc. reported net earnings of $45.5 million, or $0.33 per diluted share, for the third quarter of 2003, which ended November 1, 2003. For the same period last year, net earnings and earnings per diluted share were $18.4 million and $0.14, respectively. (Photo by Tim Boyle/Getty Images)Tim Boyle | Getty Images News | Getty ImagesShares of major department store companies slid Tuesday amid concerns about weak consumer spending. Nordstrom led the pack, plunging almost 10%. Dillard’s stock fell 7%, Macy’s fell nearly 5%, and Kohl’s slid 4%.But the stocks have also seen big run-ups recently. Nordstrom is up 27% in a month, and Kohl’s has gained about 12%. Macy’s has risen 9% so far in September.Investors might also be wary that gasoline prices will continue to increase after the attack on Saudi Arabia oil installations, and are looking to take back profits by selling shares ahead of that.A Tuesday note from Cleveland Research also said that Nordstrom’s third quarter to-date sales are “trending below consensus expectations and slightly better compared to last quarter.” Net sales for the third quarter would fall 3.5% compared with the consensus of 1.0%, analyst Rusty Wilson modeled. He also expects 2019 sales will be down 2.6%, which is a bigger drop than the consensus estimate of a 1.9% decline and the company’s forecast of 2% decline.Rising gas prices might also mean that consumers will spend less on discretionary items such as apparel. Analysts say consumers could pay an average of 15 to 20 cents more per gallon for unleaded gasoline by the end of the month. Gas prices in the U.S. jumped 3 cents a gallon overnight Tuesday, according to AAA. An article from Barron’s Tuesday also cited oil prices driving down retail stocks.Unfavorable October weather also poses a risk to apparel retailers, according to a J.P. Morgan note to clients. Last year, retailers benefited from the coldest October temperatures in 16 years. But if the warm weather holds, which it is expected to do, retailers may struggle to sell fall apparel and seasonal merchandise, Matt Boss wrote in a research note. That could set the companies up for unfavorable sales comparisons with last year. Redbook Research also said Tuesday morning that retail sales for the first two weeks of September were down 0.9% compared to August, but up 5.4% year over year. Analysts say U.S. retail sales gains in July were pumped up by Amazon Prime Day, but also thought weaker August numbers were muddied by the promotion. The preliminary data from Redbook might be an indication that August sales figures weren’t a fluke, and that consumer spending is declining.Department stores have already been struggling to grow sales recently, and might be one of the first places consumers skip as budgets tighten. Macy’s most recent earnings report fell significantly below analysts’ expectations, and sales during Kohl’s last quarter also missed the mark. Nordstrom delivered weak sales below expectations, but beat Wall Street profit estimates. Barneys New York filed for bankruptcy in August.