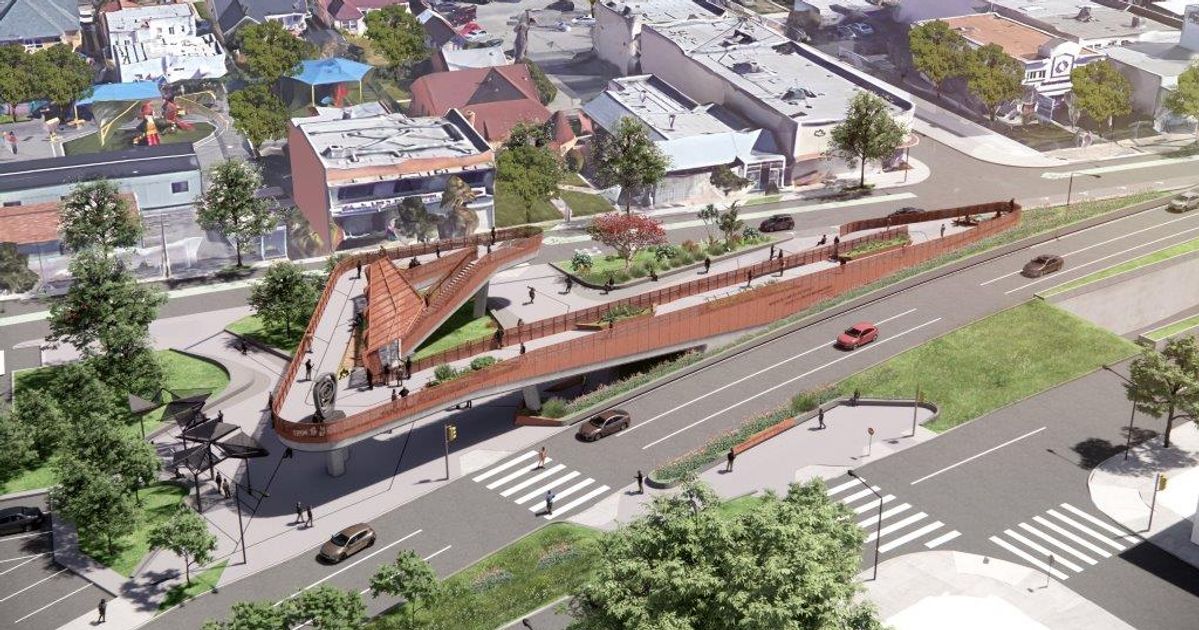 A rendering of the planned Sankofa Park, the northernmost of 11 public “pocket parks” to be created along the project’s route, where the first new commissions will be installed
Courtesy of Perkins & Will

Destination Crenshaw—a massive public art initiative in Los Angeles that will see 100 Black artists create outdoor artworks across a 1.3-mile stretch of Crenshaw Boulevard, through the heart of one of city’s historically Black neighbourhoods—has announced its first commissions. The programme will launch with new sculptures by Kehinde Wiley, Charles Dickson, Melvin Edwards, Maren Hassinger, Artis Lane, Alison Saar, and Brenna Youngblood. “Destination Crenshaw is a community-led project to revitalise the Crenshaw corridor while creating space for Black people to thrive there—socially, economically, and culturally,” says Jason Foster, the president and COO of the project. “We are grateful to be working with a remarkable first cohort of artists, all with roots in the Crenshaw community, whose commissioned works will strengthen personal connections to the neighbourhood and permanently secure the cultural identity of Black Los Angeles.”The inaugural group of artists will create works for Sankofa Park, the northernmost of 11 public “pocket parks” to be created along the project’s route, stretching from Vernon Avenue at the north to Slauson Avenue at the south. Wiley, whose bronze equestrian statue Rumors of War is a timely riposte to the debate over Confederate memorials, will create a new monument for the park. All the artists’ designs are due to be submitted for review and approval by the City of Los Angeles’s Cultural Affairs Commission by October.First launched in November 2017, Destination Crenshaw was spearheaded by Marqueece Harris-Dawson, the City Councilmember for District 8, which represents much of South Los Angeles. The $100m project has received both public and private funding, and is one of the largest-ever initiatives specifically geared towards Black artists. In addition to the art commissions, Destination Crenshaw will make direct investments in small businesses throughout the neighbourhood, organise infrastructure improvements, and create community spaces and parks. Foster added in a statement that the project was started “in the conviction that residents of one of the world’s largest and most creative Black neighbourhoods deserve to live in a beautiful, green, artistically impressive and economically strong environment.”

‘I use adornment, but with a message’: Chila Burman brings her eye-popping Punjabi neon extravaganza to Covent Garden’s storefronts
From Atari to the No Fly List, artist Yucef Merhi uncovers the pervasive power of technology
To Top
error: Content is protected !!
Top