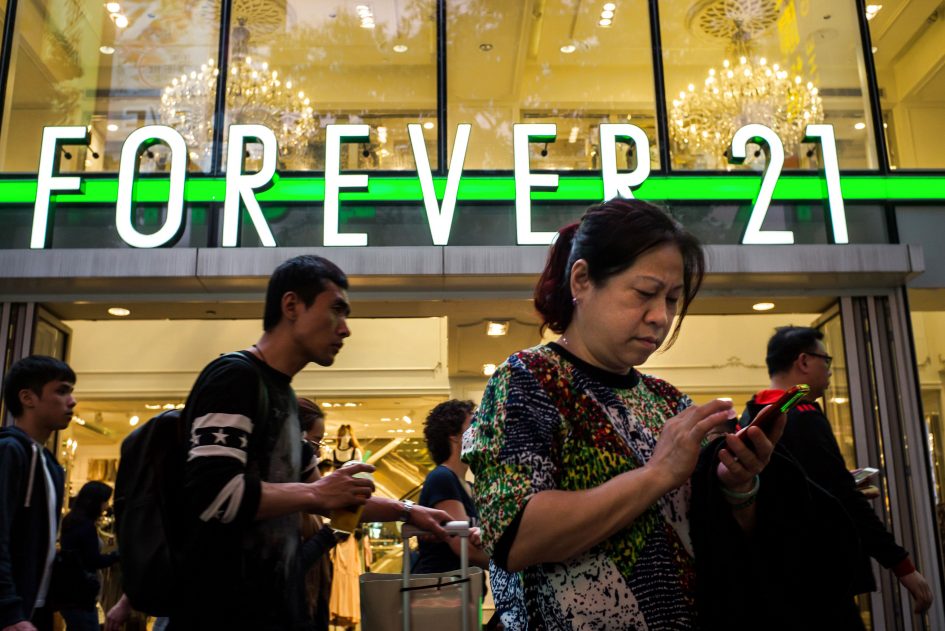 This week, Forever 21 found itself ensnared in controversy. Again.

Customers were riled up after some reported receiving diet bars with their plus-size clothing orders last Friday. Then, the company also got flack for selling bike shorts with the words “fake news” printed all over it.

The fast-fashion retailer is prone to criticism because of a lack of sufficient product review and because of the risks it’s willing to take, according to industry experts. In the last year, Forever 21 has also come under fire for selling a “Black Panther” sweater using a white model, and it settled a lawsuit alleging the company knocked-off footwear company Puma’s design. In 2017, angry consumers accused the company of stealing the design of a T-shirt that was created by creative agency Word to raise money for Planned Parenthood.

“For a lot of companies, if there are new initiatives, you have to run it by people and they have to be checked,” said Neil Saunders, managing director of GlobalData’s retail division. “Forever 21 sometimes has bypassed those things or discussions of those things, so they enact certain policies or products, whereas other companies would’ve filtered them out long before they reached the customers.”

It’s also because the volume of merchandise the company it handles. “With the volume of products they’re producing, it’s difficult for every product to undergo a sort of sanitary check, so to speak, so some things are going to creep through and reach the customer or shop floor,” he said.

Liz Dunn, CEO at retail data platform Pro4ma, also said that the issue applies to fast fashion more than traditional retailers. “Anyone who’s running the fast fashion model is going to make decisions on a shorter time frame,” she said. “Sometimes that lends itself to mistakes.”

After Forever 21 sold the T-shirt benefiting Planned Parenthood, it released a statement saying that the shirt was bought from a third-party source, and that since the product did not have trademark or intellectual property protections, there were no red flags raised at the time of purchase.

According to Dunn, that design and the other controversial styles were likely purchased from vendors that churn out designs to sell to retailers like Forever 21 and H&M. “It’s just a way of shortcutting the product development cycle … and goes back to this idea that there’s not as much vetting to what products get on the floor.”

Saunders also noted that the way the company tries to appeal to customers may expose itself to more controversy. “Forever 21 is quite an edgy company, and I think it does take risks, sometimes with fashion, sometimes with the things it does.”

Forever 21 said in a statement that the diet bars were part of a product giveaway test from third parties. “The freebie items in question were included in all online orders, across all sizes and categories, for a limited time and have since been removed,” the company said according to CNN.

The retailer wasn’t immediately available to comment further when contacted by CNBC.

“Very few people ever follow through on not using a retailer or shunning a retailer just because it’s produced a product they don’t like,” he said. “People tend to be a lot more pragmatic when it comes to taking action. It doesn’t do massive damage to this business, and that’s not just for Forever 21. That applies to a lot of other retailers that find themselves in hot water.”

Other retailers have also seen their share of stumbles. Just a few days ago, Macy’s pulled a plate it was selling that outlined portion sizes for “mom jeans” and “skinny jeans.” Last year, H&M apologized after selling a “monkey” sweatshirt modeled by a black child, while other animal styles were modeled by white children.

However, Dunn said that Forever 21 might be in a more vulnerable position, since the company has already been struggling. In June, the company was reported to be exploring restructuring options and financing should it file for bankruptcy.

And this might be especially true due to the nature of diet bar scandal.

“We’re in this moment where body positivity and inclusiveness is really, really important to the core consumers of Forever 21,” Dunn said. “There’s a natural dialogue for this to fall into about body shaming … and that’s something their customer is really attuned to.”