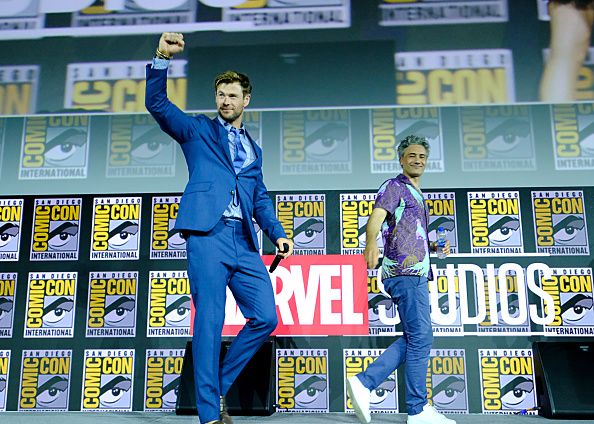 A decade ago, moviegoers were introduced to Tony Stark.

He was a fast-talking genius, playboy, billionaire, soon-to-be philanthropist played by the comeback kid himself Robert Downey Jr.

Marvel’s “Iron Man” arrived in theaters in 2008 just as rival DC’s gritty Dark Knight trilogy, directed by Christopher Nolan, was making its bow. It was a near polar opposite to the dark, gloomy story of billionaire Bruce Wayne, aka the masked vigilante Batman.

In its opening weekend, “Iron Man” snared nearly $100 million at the box office, before going on to garner just under $600 million worldwide. At the time, opening weekend ticket sales of “Iron Man” were just short of the first-weekend sales for “Spider-Man,” the 2002 blockbuster that held the record for the top non-sequel superhero movie opening.

A year later, Disney made its move. While Marvel had already contracted several films with Paramount and Universal as part of its Marvel Cinematic Universe, CEO Bob Iger closed on a deal to purchase the comic book company for around $4 billion.

“This is perfect from a strategic perspective,” Iger said at the time. “This treasure trove of over 5,000 characters offers Disney the ability to do what we do best.”

It seems he was right.

Since releasing its first Disney produced Marvel movie in 2012, the company has earned more than $18.2 billion at the global box office. And it’s already on its way to make billions more.

At San Diego Comic-Con on Saturday, Marvel announced its upcoming slate of films and TV shows that expand on the 23 movies already in the MCU.

Disney has produced 16 of those films. Paramount distributed “Iron Man,” “Captain America: The First Avenger,” “Thor” and “Iron Man 2”; and Universal distributed “The Incredible Hulk” as part of deals that predated Disney’s acquisition of Marvel.

More recently, Sony has produced two Spider-Man films — “Homecoming” and “Far From Home” — in partnership with Disney, allowing the character to appear in the MCU.

In total, all of the movies in the Marvel Cinematic Universe have made more than $22 billion at the global box office.

To be sure, these box office numbers do not include the cost of production or marketing costs. They also don’t count the billions in merchandising that Disney has made over the last decade.

When the trailer for “Avengers: Endgame” first came out, there was little doubt that it was going to be a big movie at the box office.

“Infinity War” had left the fate of most of the cast of superheroes uncertain. Theories about what happened to those that were dusted in the final moments of the film circulated on message boards, forums and social media. How was Marvel going to bring them back?

Certainly, the studio would have to. After all, Spider-Man had his own standalone feature coming out just a few months after “Endgame” was set to be released, and Marvel had green lit sequels for Black Panther and Doctor Strange, among others.

Early estimates had the film making just over $2 billion, a sizable feat for a superhero movie. But, could it take on the top box office spots? Perhaps not.

And then on opening weekend, “Endgame” did the impossible. It hauled in $357 million in the U.S. and $1.2 billion at the global box office — and people began to reassess what was possible.

Within 87 days in theaters, “Endgame” became the highest grossing film of all time. The film had earned $2.79 billion, topping “Avatar’s” record of $2.7897 billion.

With “Spider-Man: Far From Home,” Phase 3 of the Marvel Cinematic Universe came to a close. On Saturday in Hall H at San Diego Comic-Con, Marvel’s president, Kevin Feige, unveiled Phase 4.

The 10 films and TV projects will all be released in the next two years, some theatrically and the rest on Disney’s upcoming streaming service Disney+.

Films include “Black Widow,” “Eternals,” “Shang-Chi and the Legend of the Ten Rings,” “Doctor Strange in the Multiverse of Madness” and “Thor: Love and Thunder.”

The Disney+ productions are “The Falcon and the Winter Soldier,” “WandaVision,” “Loki,” “Hawkeye,” and an animated series called “What If?.”

“We didn’t even mention that we’re making ‘Black Panther 2,'” Feige said at the end of the panel. “We didn’t even talk about that ′Guardians of the Galaxy, Vol. 3′ is coming. We didn’t have time to talk about ‘Captain Marvel 2.’ “

“I didn’t even have time to talk about the Fantastic Four,” he added, the crowd roaring with excitement. “And there’s no time left to talk about mutants and how mutants come into the MCU.”

Many of these teased films would not have been possible before Disney acquired a number of Fox properties earlier this year. Feige also revealed that a “Blade” movie would be going into production.