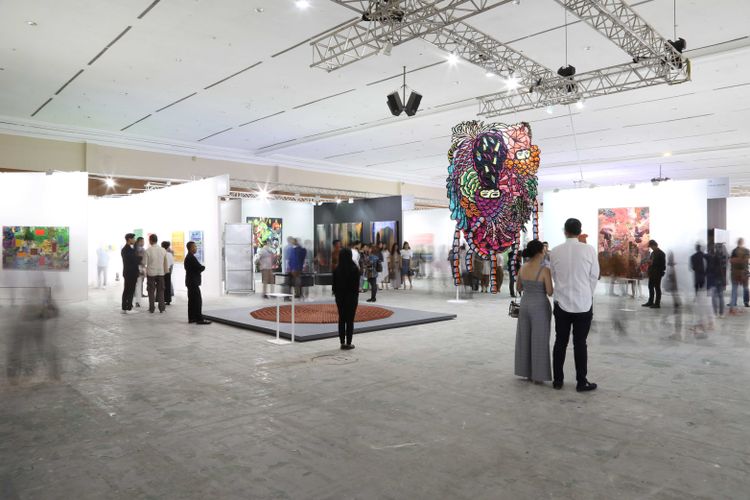 
The eleventh edition of Art Jakarta, which closed on Sunday, had all the trappings of a debut fair: new leadership, a new venue, 40 of its 70 galleries from around Asia Pacific participating for the first time, and the phalanx of curious fresh faces from around the region and the world. “Indonesia is a strategic location, as the region’s most populous country; like it or not, it is always important,” says the fair’s artistic director Enin Supriyanto.

Supriyanto, a Jakarta-based curator, joined the fair about a year ago alongside new director Tom Tandio, a well-connected collector and businessman, and the two have overseen the fair’s move from the Ritz-Carlton Jakarta to the Jakarta Convention Centre (JCC) Senayan. First established as Bazaar Art Jakarta by the media company MRA, the fair was renamed in 2017. Its new venue is key as the JCC is one of three locations in the city with a bonded customs clearance so, Supriyanto says: “Customs were handled right here. It’s all official and standardised, and that is critical.”

Supriyanto is keen to point out that Indonesia has seen two decades of stable economic growth, hovering just above 5% annually. Under the new president Joko Widodo, Supriyanto says, “the current government is building more infrastructure, and hopefully will build upon that, beyond the MTR to things like new ports, giving remote islands sea connections, and more highways.” A proposed moving of the archipelago nation’s capital from congested Jakarta in 2024 is expected to have little impact on the city’s economy, and the unrest caused by West Papua’s ongoing independence movement has little impact on the central island of Java.

Art Jakarta’s expansion came at a fortuitous time, its rebranded form rising phoenix-like from the 2017 cancellation of Art Stage Jakarta, after just two years, and this January the eleventh-hour cancellation of what would have been the tenth instalment of Art Stage Singapore. A new fair, Art SG, backed by Tim Etchells, Sandy Angus and Magnus Renfrew, has also pushed back its scheduled debut from this November to 2020, ostensibly because exhibitors requested more preparation time; but many in Singapore say the Art Stage implosion left galleries skittish about the city-state’s art fair climate. S.E.A. Focus, a small regional platform hosted at Singaporean gallery district Gillman Barracks and backed by local gallery STPI, meanwhile launched successfully this January.

The cancelled Art Stage had dwindled to 35 participating galleries, so the expanded Art Jakarta could already claim to be the largest fair in Southeast Asia, perhaps even the flagship event for the Nusantara region encompassing Indonesia, Malaysia and Singapore.

Art Jakarta this year attracted a number of participants from East Asia, which traditionally has limited interaction with the Southeast Asian art world. Dealers and collectors from Mainland China were particularly thick on the ground, only in part because of a show by the mainland artist Xu Bing opening concurrently at Jakarta’s Museum Macan. Many said they were visiting Indonesia for the first time out of curiosity about the fair. For dealers around East Asia, Indonesia presents at best a natural new area for growth, and at worst a neutral environment given trade tensions between Japan and South Korea plus political animosity between the Mainland and Hong Kong and Taiwan.

“We started to work with two Southeast Asian artists [Thailand’s Mit Jai Inn and Burma’s Sawangwongse Yawnghwe] last year,” says Megan Yu-hua Lan, the assistant to the director of Taipei’s TKG+ Gallery, which was showing in Jakarta for the first time. “We wanted to be more international, and that was before [tension between] Hong Kong and China.” Lan reported strong sales at the fair, which was echoed by other galleries bringing Southeast Asian artists.

Arario, a South Korean gallery with a Shanghai location, also did well with its Indonesian artists Eko Nugroho and Jompet Kuswidananto. Its director Henna Joo predicts more regional integration and artistic interaction will be born from Southeast Asia’s growing economy.

Peiyu Lin, the director of Taipei’s Project Fulfill Art Space, says it has stopped exhibiting at the major Mainland Chinese fairs, “not because it is scary going there now, but in general the whole economy. For rich Chinese, the government is monitoring how they are spending, and the currency controls are becoming stricter. It is so hard to take RMB out.” The competitive market there, and in Hong Kong, is also squeezing out medium sized regional galleries.

Supriyanto says Art Jakarta is little concerned with the Singapore fairs, or regional shifts: “We know the region has a significant number of collectors; we have had two years of Macan as a professional, international museum; there is also a big number of Indonesian artists working internationally. We have it all in Indonesia.” He adds “people are now more interested in knowing first about the economy, which leads to the cultural history. Whatever you know about Indonesia, it is too little: so come.”