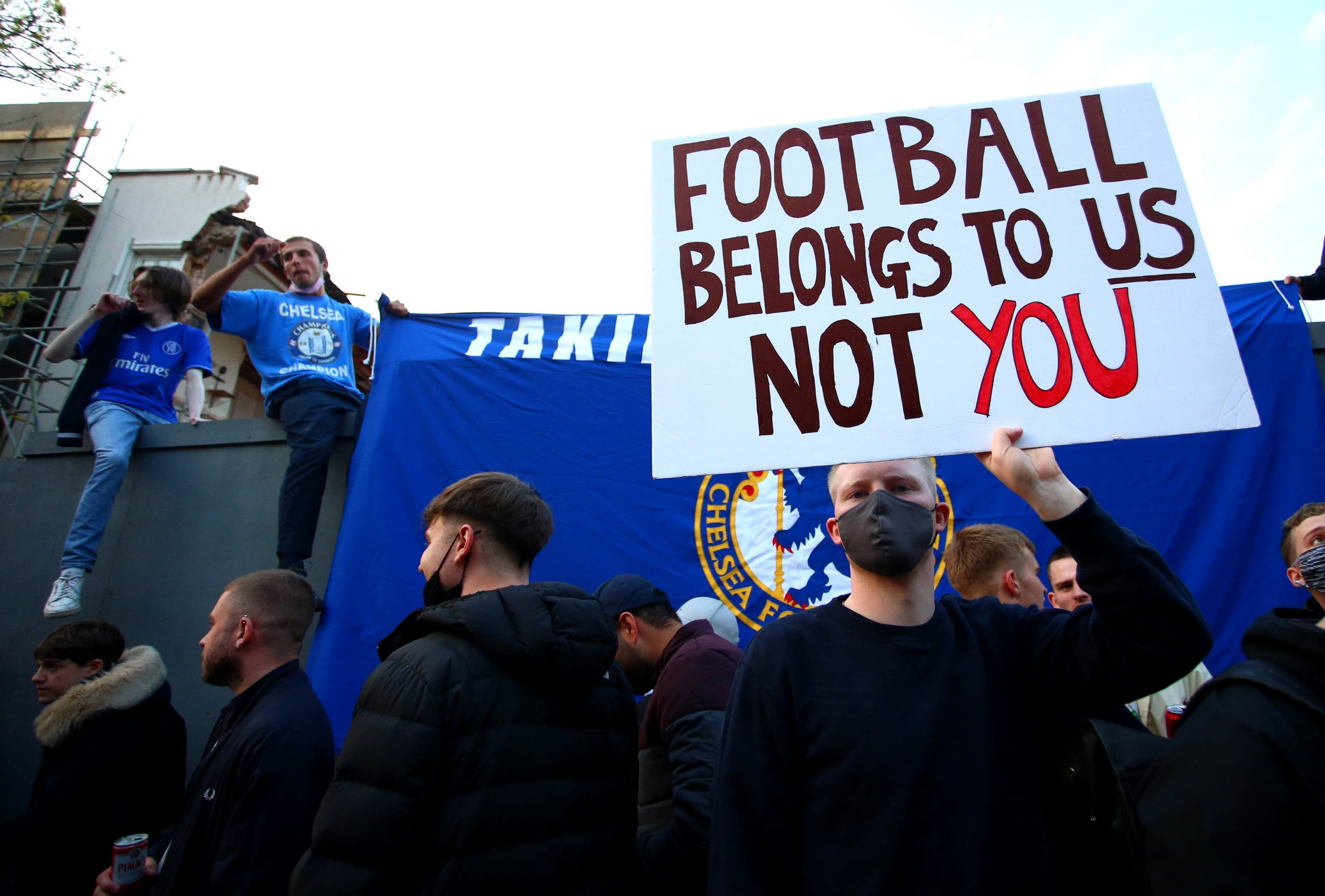 LONDON, ENGLAND – APRIL 20: Fans hold banners opposing Chelsea signing up for the newly proposed European Super League ahead of the Premier League match between Chelsea and Brighton & Hove Albion at Stamford Bridge on April 20, 2021 in London, England.Chloe Knott – Danehouse | Getty Images Sport | Getty ImagesLONDON — Plans for a breakaway elite soccer league in Europe have already unraveled, following widespread criticism and even threats of government intervention.Announced on Sunday, the European Super League is designed to rival the UEFA Champions League format, which is currently Europe’s top annual club competition.Twelve of Europe’s wealthiest teams had signed up as founding members of the new league, and it was being backed with $6 billion in debt financing from JPMorgan. But the move sparked outrage among lawmakers, governing bodies, former players, fans, managers and pundits, with many concerned about the ramifications for the structure of domestic competitions.Many see it as a cynical project and highly controversial, as the permanent members of the league could not be relegated.Chelsea became the first club on Tuesday evening to signal that it was jumping ship, with fans protesting against the plans outside its West London stadium ahead of a Premier League match. Manchester City quickly followed with official confirmation of their withdrawal, and then England’s other four clubs pulled out just hours later.John Henry, the principal owner of Liverpool and the Boston Red Sox, said in a video shared on Twitter on Wednesday: “I want to apologize to all the fans and supporters of Liverpool Football Club for the disruption I’ve caused over the past 48 hours.”Arsenal apologized in an open letter to their fans that was published on the team’s website on Tuesday.”The response from supporters in recent days has given us time for further reflection and deep thought,” the letter reads. “It was never our intention to cause such distress, however when the invitation to join the Super League came, while knowing there were no guarantees, we did not want to be left behind to ensure we protected Arsenal and its future.”It continues: “As a result of listening to you and the wider football community over recent days we are withdrawing from the proposed Super League. We made a mistake, and we apologize for it.”The remaining six teams in Spain and Italy are yet to pull out or comment on the departures of the English teams.Shares of Juventus, one of the three Italian teams in the new league, fell by as much as 11% in trading on Wednesday.”Despite the announced departure of the English clubs, forced to take such decisions due to the pressure put on them, we are convinced our proposal is fully aligned with European law and regulations,” the ESL said on Tuesday.It added that it is “convinced that the current status quo of European football needs to change.”UEFA President Aleksander Ceferin had condemned the project, describing it as “a spit in the face” of all soccer lovers. Meanwhile, British Prime Minister Boris Johnson vowed to “thwart” it, and likened it to a “cartel.”The teams that originally agreed to play in the ESL included:England: Manchester United, Manchester City, Liverpool, Tottenham, Chelsea and Arsenal.Spain: Barcelona, Real Madrid and Atletico Madrid.Italy: Juventus, AC Milan and Inter Milan.On Monday evening, the chairman of the European Super League, Florentino Perez, said the plans to form the new breakaway elite competition were designed “to save” soccer.He pushed back against the widespread criticism by claiming that change is necessary because young people “are no longer interested” in the sport.—CNBC’s Sam Meredith contributed to this article.