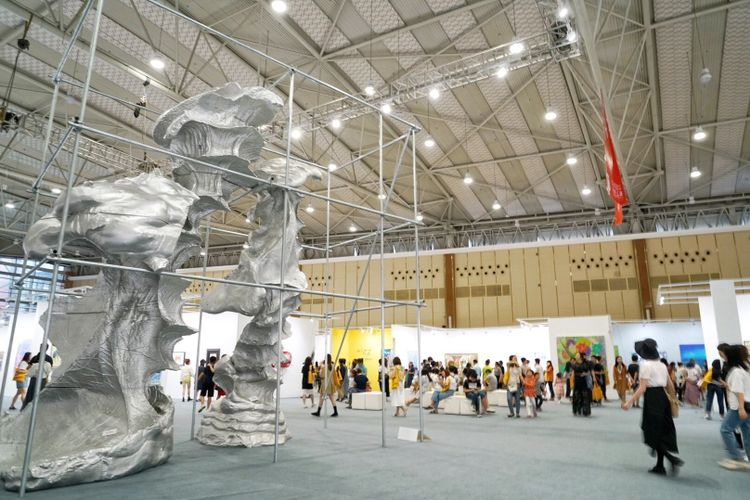 Now, however, most of Tianfu’s empty plots are once again construction sites, if not already transformed into glistening new edifices.

Amidst forecasts of a slowing mainland economy, China’s interior regions appear to be booming. Sichuan Province reported an 8% GDP growth in 2018, according to the state-run Xinhua news agency, compared to 6.6% nationally and in both Shanghai Beijing, according to Xinhua.

“Chengdu and the wider region, including Chongqing, are the most active parts of western China, and the economy is doing well lately,” says Liu Jie, who founded Chengdu’s leading commercial gallery A Thousand Plateaus in 2007. “Especially in the last year, Chengdu is one of the cities in China where the economic development and influence have skyrocketed.”

“Chengdu’s development is one of the best in the country. The economy won’t slow down, and even if it does the art market is all doing well. People’s love of art will not all be impacted,” says Art Chengdu’s co-founder, Huang Zai. “It is a city with a lot of culture, and many artists living here. Collectors here also want to buy locally. Chengdu is a place for doing things, and very lively.”

The fair’s move has allowed it to expand from 31 participating galleries to 46, as the floor space went from 3000 sq m to 8000 sq m, says Huang, who co-founded the fair with the collector Huang Yu (no relation). Though dominated by domestic coastal stalwarts like Ink Studio, ShanghArt and Long March, several international galleries including White Cube, Pace and Contemporary Tokyo have joined as well.

Huang says: “I feel we cannot compare Art Chengdu to other fairs; our first year was very small. For the second year, about 80 galleries applied, and in our third year we expect to be bigger.”

Lise Li, the owner of the Shanghai-based Vanguard Gallery, observes: “My feeling is that there is a collector culture here in Chengdu, or at least a sense of the art work,” though it may require some guidance and time. “The fair is probably the most effective and direct way to guide such a region, so I think the future quality and direction of Art Chengdu is actually quite important.” Her Shanghai gallery has “not had many Southwest Chinese clients before, so this time we’re trying to meet some new friends and let more people know about our mentality as well.”

“The fair is good,” says Liu Jie, because “the size and the number of visitors have increased significantly. And because it establishes a Chengdu Art Week, during which many professionals and related people from home and abroad come to Chengdu,” and visit its galleries and museums. Existing institutions A4 and Zhi opened new shows, and the later hosted the second year of the Museum 2050 forum.

Two new private museums also opened their doors during the week; the Chengdu Contemporary Image Museum, which opened with several shows including the inaugural Golden Panda Photography Award, for which ten male Chinese artists such as Jin Ping and Zong Ning were nominated.

The new Tuff Contemporary Art Museum launched in Chengdu’s historic site of Anren (around 60km from downtown Chengdu) which also will get its first commercial gallery, MMS3, opening on 3 May with a group show titled Formula 1. “Choosing Anren is not quite a task,” says MMS3’s founder Raf Hu, citing the new Anren Biennale backed by developers OCT Loft. “It made the ancient town a new hot spot for contemporary art. Meanwhile having a space in downtown would be quite boring, considering all these Instagram kids would come over and just take a lot of selfies with our works. For me art is more than amusement, and a remote space with help us to choose audience who are really into what we are doing here.”

Hu, a Chengdu native and young collector, adds: “I think it is about time that for a younger generation’s gallerist to start doing something to support artist and collectors at his own age. For we are growing up in a different era, in which China has changed more than ever…We should start something new even if almost everything [has already been] done.”

Italian galleries no longer have to pay artist royalties on primary market sales
Painting is more important than politics: Adrian Ghenie on his Trump-inspired portraits in Venice
To Top
error: Content is protected !!
Top