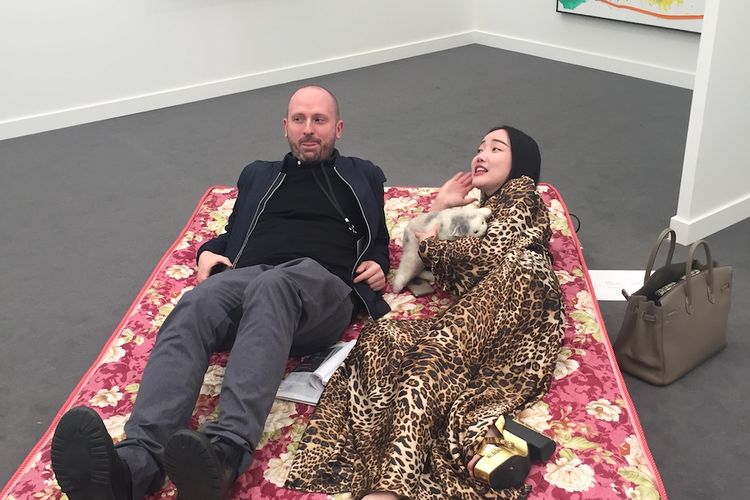 
When our reporter met Coco the cat—and Nancy, of course
Helen Stoilas

Animals are a firm favourite at Frieze New York—indeed, meticulously groomed cats and dogs are often seen happily strolling around the fair. Pop artist Nancy Lang was spotted charming the crowds on Randall’s Island with her fetching (fake) feline known as Coco Chanel. Lang was so relaxed at the fair that she decided to lie down on Zhang Peili’s Audible Mattress (2018), a work of art fitted with speakers and a pressure-sensing controller on the stand of Boers-Li Gallery. Lang even managed to entice one of our correspondents to bed down beside her, sending our stiff-upper-lipped writer into a fit of giggles.

We tested the experience in Frieze’s Virtual Reality sector, Electric, organised by Daniel Birnbaum, for motion sickness after a large lunch—and it passed. But some of the content was more stomach-churning, including a morose fairytale wolf who swigged from a bottle in his underpants in Nathalie Djurberg and Hans Berg’s It Will End in Stars (2018). But the vain among us should take note: the VR goggles can leave your face looking red, so bring a powder compact (or a disguise).


NADA condemns Manafort to life in the kitchen

We spotted Paul Manafort, President Trump’s disgraced former campaign chief, at the New Art Dealers Alliance (NADA) House exhibition, which is being held in three historic houses on Governors Island. Fortunately, he was just on canvas, in the artist Billy Jacobs’s new painting series House Arrest (2019), which depicts Manafort’s crimes and puts him in a strange prison of sorts. The works, hung in a disused, dilapidated kitchen on the stand of the New York gallery False Flag, include a blue-faced portrait installed in an empty cabinet with no doors. Sad. “Perhaps this is exactly where Manafort belongs: under house arrest within a declining historic home… except we all get to visit”, the artist’s statement concludes. Snap.

Guests at the VIP preview of Tefaf New York Spring on Thursday were treated to a live performance with a difference when a figure clad in crazy garb took to the aisles of the august fair at the Park Avenue Armory. The mysterious performer turned out to be a figure from Jean Dubuffet’s theatre piece Coucou Bazar, which forms part of the French artist’s L’Hourloupe cycle. Guests, including the Avengers star Scarlett Johansson, were fascinated by the surreal interlude, which was presented as part of Pace Gallery’s exhibition on Dubuffet. Perhaps she was taking notes for her next blockbuster.