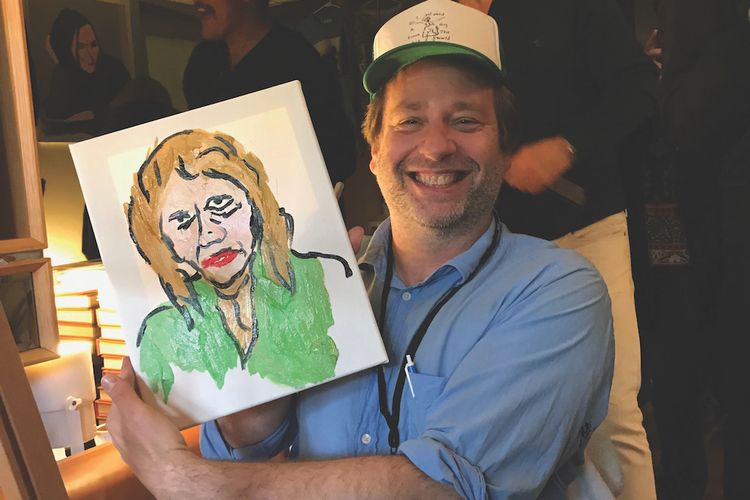 
Joel Mesler’s sitters will be hoping he has sturdy sea legs.
Jane Wesman and courtesy of Cultural Counsel

The New York dealer Joel Mesler is wowing the arty crowds at fairs such as Independent and Nada Miami with his striking portraits of guests and friends. Now he is putting brush to canvas again and will paint more watercolour portraits on the Frieze ferry travelling to Randall’s Island on 1 May. Participants will get a copy of Mesler’s new book, published in conjunction with Harper’s Books and the non-profit art space White Columns. “It’s $100 for the book that comes with your live watercolour portrait on the cover,” says a spokeswoman. But be forewarned. “It’s his first time doing this on a boat, and he’s been known to get seasick,” she quips.


Works by Steve Keene on view at PPOW.
Helen Stoilas


The price is slight for Steve Keene’s paintings

Fairgoers should plan to arrive at Randall’s Island with cash in hand so they can nab one of Steve Keene’s priced-to-move paintings at PPOW’s stand. The plywood works, starting at just $10 and going up to $50, feature subjects like rock gods The Beatles, David Bowie and a menagerie of dogs and cats. Keene, who has a background in printmaking as well as DJing, sees his practice as the art world version of a musician’s merch table. Meanwhile, a forthcoming exhibition at PPOW’s gallery in Chelsea recalls how the trailblazing feminist artist Carolee Schneemann, who died in March, really loved her cat La Niña, citing the moggy as instrumental in the creative process. Tooth and Paw (9 May-1 June) puts La Niña centre stage , displaying a “series of sculptures assembled by the devoted cat”, the organisers say. Schneemann was indeed keen to assert that the works on display are La Niña’s creaturely creations, bringing to light how felines fuelled the artist’s vision. “With this honorary show, we send kisses to infinity for Carolee,” the gallery signs off affectionately (or in cat language, mwah, mwah). G.H.

Meet the man who can make inanimate objects sing. The UK artist Oliver Beer is bringing his scintillating sound-based art to the Met Breuer this summer (2 July-11 August), with some help from 32 objects from the Met collection. “The more time we spend with these diverse objects, thinking about their harmonies as much as their physical forms, the more we start to see patterns across history,” Beer tells us. Who knew that a 7,000-year-old Persian pot and ceramic pieces by Betty Woodman could hum and buzz in unison?

Ye gods! Those titans of technology—Elon Musk, Steve Jobs and Mark Zuckerberg—are presented as prophets, Greek deities and Roman emperors in a new show due to launch on 1 May at the Elizabeth Collective event space in midtown Manhattan (The Beginning of the End, until 24 May). These headline-hitting entrepreneurs have been turned into sculpted mythological figures by the Chilean artist Sebastian ErraZuriz, whose work is a caustic commentary on the impact of technology. Musk is portrayed as a winged messenger wearing a helmet emblazoned with the motif of his rocket company, SpaceX. But Zuckerberg, depicted in the style of a Roman bust (right), really stands out, looking no less like an all-conquering millennial Julius Caesar. All hail the Emperor of Facebook.

Video of Polish artist Natalia LL eating a banana temporarily goes back on show after protests over museum’s ‘censorship’
The Art Newspaper’s pick of the 2019 Venice Biennale
To Top
error: Content is protected !!
Top