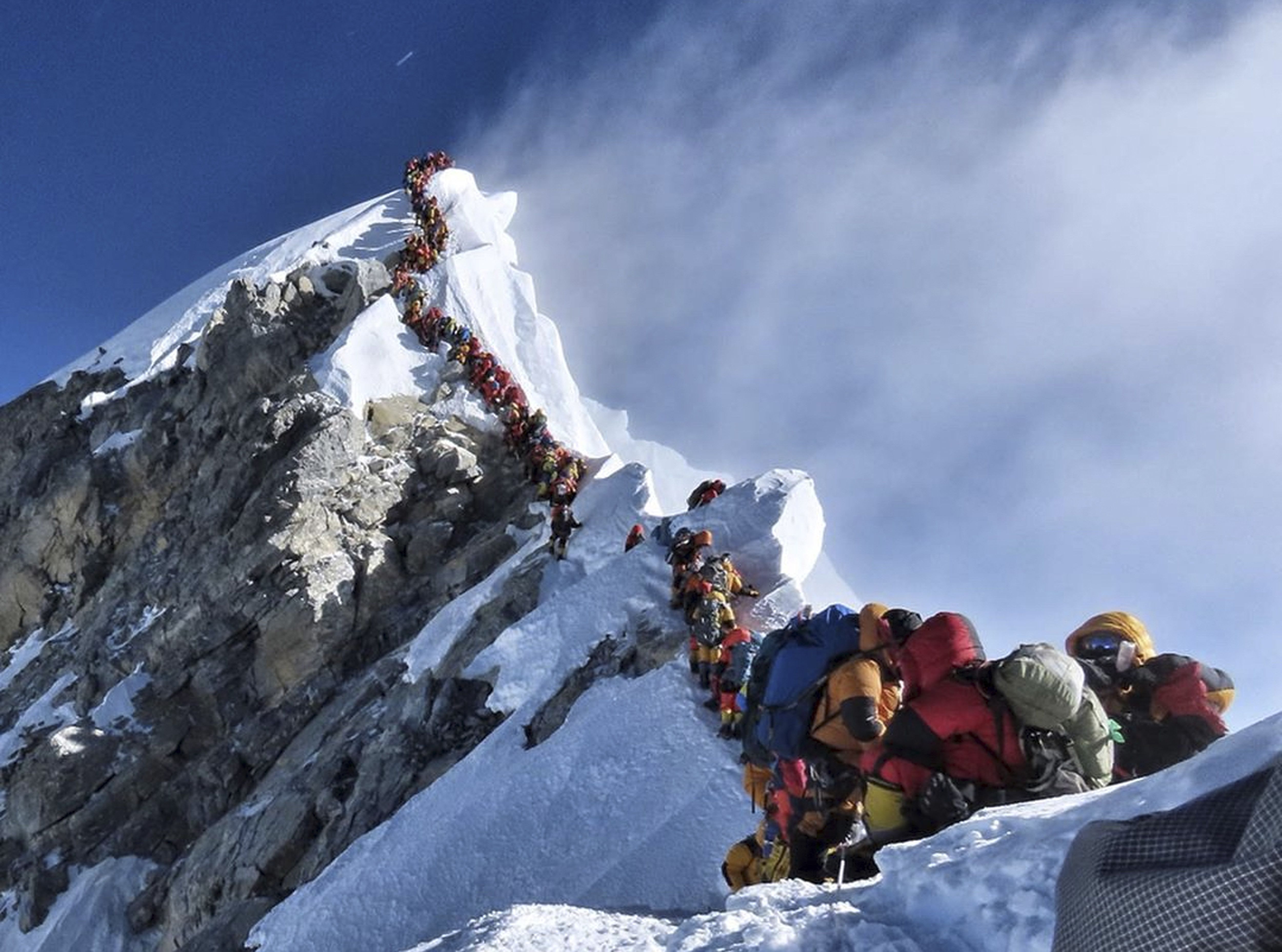 In this photo made on May 22, 2019, a long queue of mountain climbers line a path on Mount Everest.

Several recent events, incidents and widely shared images have brought the issue of “overtourism,” and its economic, environmental and human consequences front and center.

For three days in April, 10 popular tourist sites in the Faroe Islands were closed for maintenance but open to volunteers who came to create new walking paths, construct viewpoints, erect signs and rebuild ancient cairns.

At the end of May, the Louvre Museum, the home of Leonardo da Vinci’s Mona Lisa painting and a must-do for any visitor to Paris, closed for one day after a walkout by workers who complained about overcrowding.

In Venice, where there’s a movement to ban cruise ships from disgorging thousands of tourists into an already over-visited city, the MSC Opera cruise ship rammed into a dock and a tourist riverboat on June 2, injuring five people.

And last month the deaths of several climbers on Mount Everest was blamed on congestion on the trails near the top.

The image broadcaster and adventurer Ben Fogle tweeted of a long line of climbers hoping to reach the summit may bring a limit to the number of hikers allowed on the mountain. Some have suggested a lottery; comedian Conan O’Brien joked about a Disney-style Everest Fastpass.

Around the world, tourism bureaus and governments are taking steps to combat the wear and tear overtourism is creating. And not all these actions are brand new.

“In the 1980s, the government of Bhutan implemented sustainable tourism policies by following a tourism model of high value, low impact,” said Erika Richter, spokeswoman for the American Society of Travel Advisors (ASTA).

Instead of capping visitors at a certain number, as in the Galapagos, Bhutan charges visitors a daily fee of $200 during low season and $250 during high season.

“While the daily fee for visiting Bhutan may sound expensive, it covers most costs in-country including accommodations, food, guide, driver and entrance into festivals, making it quite reasonable,” said Beth Whitman, owner of WanderTours, “It also deters hordes of backpackers and budget travelers, which is exactly the government’s intention after witnessing the effects of tourism in nearby Nepal and India.”

A damaged tourist river boat can be seen docked next to a cruise liner after they collided on June 02, 2019 in Venice, Italy.

Other cities have rolled out campaigns to cap and control tourism as well. Some try to tackle not only the influx of tourists, but their manners.

In Amsterdam — a city of less than 1 million residents that hosts more than 19 million tourists a year — the tourism bureau is trying to direct visitors to out-of-the-center neighborhoods and to other Dutch destinations. The city’s “Enjoy & Respect ” campaign reminds visitors, especially young people between ages 18 and 34, that while Amsterdam is an “open, creative, innovative and tolerant city where the limits of what is allowed are wide,” public urination, littering, singing loudly and other bad behavior are not allowed in the city and will incur big fines.

In addition to voting in entry fees for tourists, the city of Venice has adopted a Detourism campaign, which encourages visitors to go beyond the usual tourist sights. A daily tourist report sends alerts with tips on behavior from the #EnjoyRespectVenezia campaign to locals and visitors alike predicting how congested the streets, canals and attractions may be.

To encourage visitors to go beyond crowded Reykjavik, Iceland’s tourism bureau created the “the A to Ö of Iceland ” campaign, challenging visitors to head for other parts of the country.

Tourists are also directed to the Icelandic Pledge, which asks visitors to respect the landscape. Among the vows: “When nature calls, I won’t answer the call on nature,” and “I will take photos to die for, without dying for them.”

Elsewhere, highly Instgrammable destinations, such as Jackson Hole, Wyoming, are welcoming visitors, but asking them not to geotag their photos.

“The geotagging campaign is not meant to exclude or discourage visitors from enjoying photos and Instagram posts,” said Kate Sollitt, executive director of the Jackson Hole Travel & Tourism Board. “We are simply asking them to think before geotagging certain remote, pristine areas that may be difficult to get to or are being overrun.”

The role of tourists and travel advisors

Guarding against overtourism isn’t just the responsibility of governments and tourism agencies, said ASTA’s Richert. “Although governments’ involvement may hold the most power, there’s also a place for tourists and travel advisors to do their part in responsible tourism.”

The challenge is finding the tipping point between checking off the must-see destinations on many people’s wish lists and adding to overtourism.

In addition to urging travelers to choose small cruises that are less overwhelming to a community, the Center for Responsible Travel suggests travelers avoid the already overcrowded in favor of less-visited destinations offering similar scenery and experiences.

“You can’t suddenly say one day that tourism is closed,” said Jessica Hall Upchurch, vice chair and sustainability ambassador for the Virtuoso network of luxury travel advisors. “What you can do is be transparent about it and offer solutions. Because at their core, people want to do the right thing.”

How the U.S. lost its energy independence to the Middle East
The 2019 F-150 Raptor is Ford’s most capable, fun 4X4 pickup truck
To Top
error: Content is protected !!
Top