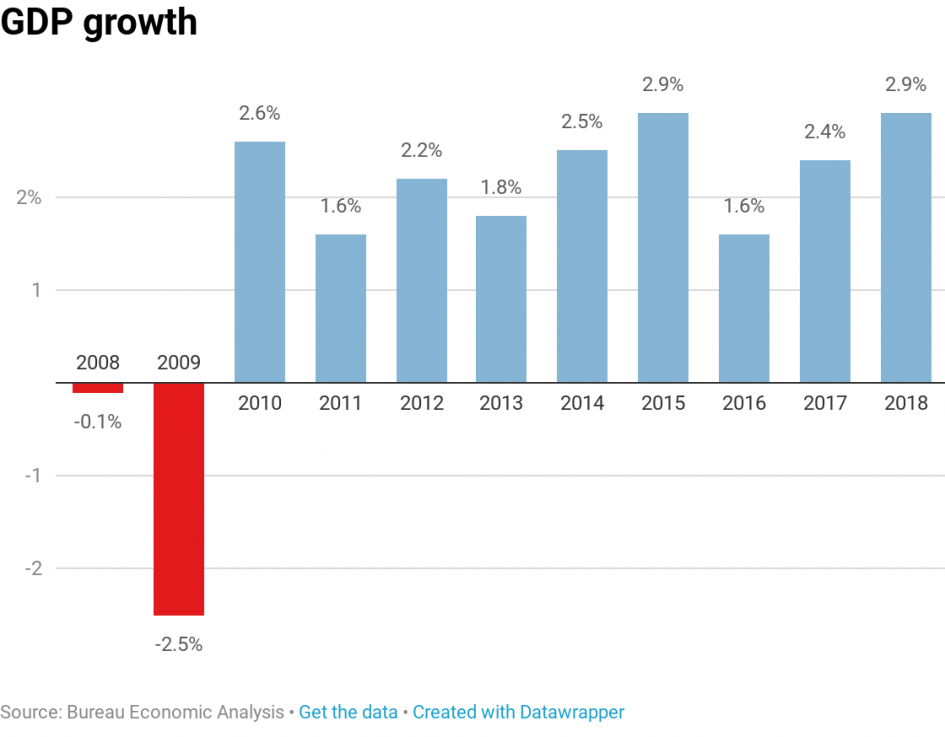 The Commerce Department’s Friday report on the strength of the economy showed that gross domestic product expanded 2.5% on a fourth-quarter-over-fourth-quarter basis last year and 2.9% from the prior year. That marks a downgrade to a previous estimate of 3% and an upwardly revised 2.8% in 2017.

The most recent data undermines Trump’s longtime assertion that his policies are pushing growth into a 3%-plus range through a policy cocktail of deregulation, lower taxes and a U.S.-focused trade strategy.

Economists pointed to more muted residential and business investment for the recent decline in GDP prints, with some highlighting persistent trade war worries and higher interest rates for the decline.

Others, like RSM Chief Economist Joseph Brusuelas, added that the waning impact of the administration’s tax cuts could also be to blame.

“We’re just decelerating. The effects of the 2017 Tax Cut and Jobs Act are now exiting the system and the economy is on its own. What you’re going to see is a deceleration in the second half back to the long-term trend of 1.8%,” Brusuelas said.

U.S. President Donald Trump listens during a working lunch with governors on workforce freedom and mobility in the Cabinet Room of the White House in Washington, D.C., U.S., on June 13, 2019.

“In 2020 it’s going to be about policy, specifically trade policy,” he continued. “If we see a cessation of hostilities and we go back to basics, we can see a definite acceleration of growth. If not, we’re going to see a continued deceleration.”

Tom Simons, money market economist at Jefferies, noted that the Commerce Department upgraded its GDP estimate for the fourth quarter of 2017 to 3.5%. That, in turn, impacts the year-over-year comparison when looking at the final quarter of 2018 as economists now must look at a higher base growth rate.

“There’s an offset because there was a pretty substantial upward revision to fourth quarter 2017,” he said. “That means 2018 started at a higher level than previously estimated. That mitigates some of the loss in the growth rate.”

Still, President Donald Trump was quick to fault the Federal Reserve for the decline from 3.1% growth in the first quarter of 2019, comparing the central bank to an “anchor wrapped around our neck.”

The Fed is set to meet next week, when many expect the central bank will announce a 25 basis point reduction to the overnight lending rate amid below-target inflation rates and softer economic growth overseas.