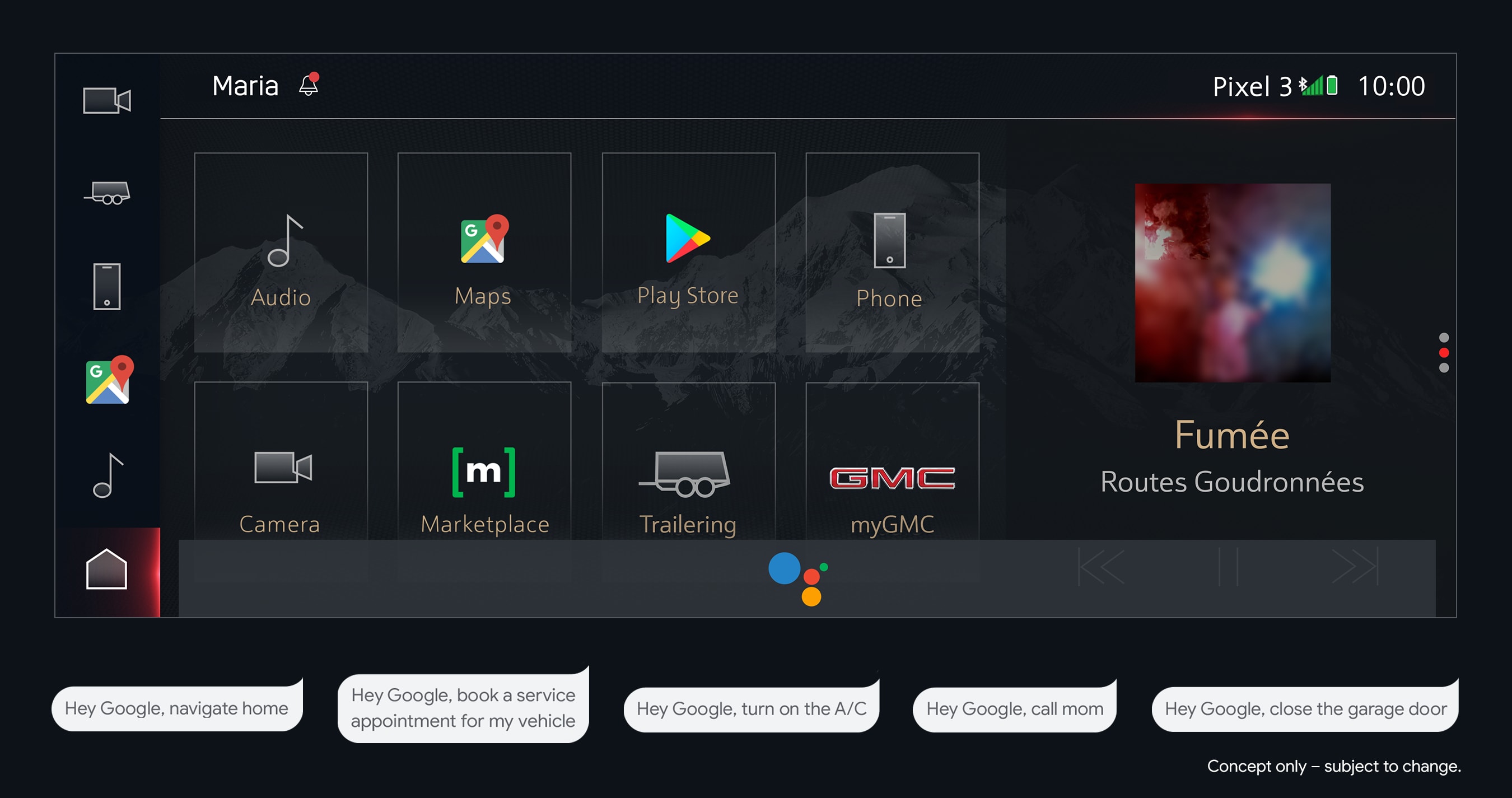 A concept of what General Motors’ new infotainment system will look like once Google Assistant is integrated into its vehicles beginning in 2021.

DETROIT – General Motors and Google are teaming up to install the tech giant’s voice assistant and apps, including Google Maps, into GM vehicles beginning in 2021.

The partnership, announced Thursday, marks a significant milestone for both the automotive and tech industries as the sectors continue to converge in attempt to better integrate into cars to appease consumers who’ve grown accustomed to using the technology in their homes and on their phones.

“That’s one of the things we’re most excited about for this is really bringing all of the consumers digital services together,” Patrick Brady, Google’s vice president of engineering, told CNBC.

The partnership, according to company officials, is not exclusive and data produced from the new system will be shared between both companies. Financial details of the tie-up were not disclosed.

For GM, the deal is expected to give drivers a better experience without having to connect their cell phones to the in-vehicle infotainment system. It also could potentially help the automaker make money off its own in-vehicle apps, which it will continue to offer.

A growing number of drivers have started using Google’s Android Auto or Apple’s CarPlay, which mirror phone apps on in-vehicle infotainment screens, instead of the traditional in-vehicle infotainment systems, according to a recent J.D. Power study. That’s a concern for automakers that have spent significant capital to develop their own systems, including in-vehicle apps such as GM’s Marketplace that allow users to purchase goods and services.

Google Maps will be integrated into GM Infotainment in 2021. Maps will be constantly up-to-date and help drivers navigate with real-time traffic information, automatic re-routing and lane guidance. (Note: concept image)

“Long story short is we listened to our customers,” Santiago Chamorro, GM’s vice president of Global Connected Customer Experience, said in an interview. “They told us they wanted to integrate all these ecosystems in a safe way, in a seamless way, embedded in the vehicle.

“We have a great partner with Google to have among the best in the world solutions for all three of these elements – voice, navigation and apps,” he said.

For Google, the partnership will bring millions more people a year into its Android ecosystem. That includes introducing new users to its Google Assistant, a growing business for the Silicon Valley company and Google Play store, where drivers can listen to the same albums, podcasts and audiobooks in the vehicle as at home.

With the built-in Google Assistant, drivers will be able to make phone calls, text and listen to tune to their favorite radio stations, as GM’s system currently offers, but they’ll also be able to connect to their homes that have smart speakers and other devices.

“We envision where you can use the same digital assistant in the car to be able to control the seat heaters but also the temperature, open the garage or whatever it might be with your smart home devices at home,” Brady said.

For safety reasons, not all commands or requests will be available in the vehicle, company officials said. They will be determined on a case-by-case basis.

Partnering with America’s largest automaker also gives Google an advantage over Amazon and Apple, both of which also are attempting to grow their presence in the automotive industry.

Officials said discussions between the two sides began years ago, when GM was one of the first automakers to have its infotainment system on an Android operating system in 2017 model-year vehicles. Talks to expand the partnership, officials said, began about a year ago.

The new partnership will include an entirely new system for GM infotainment systems beginning for the 2022 model-year, which generally begin to hit car lots the year before. The new system, as GM’s is today, will be capable of over-the-air updates.

Voice assistants, while increasingly popular, have come under scrutiny due to their need to constantly listen to conversations and companies recording conversations.

Brady said the “scrutiny is fair” and companies need to make sure that users are “given control and transparency” over how their data is used.

“I don’t think this is necessarily different in the vehicle,” he said. “The same principles need to apply.”

Chamorro agreed, citing customers must opt into the services and GM will remain transparent with customers about how the data will be used.

“This data, we manage it in a in a very transparent way,” he said. “We manage it in a way that complies specifically with the services that we’re intending to use the data for and we also do that … in an anonymous way.”