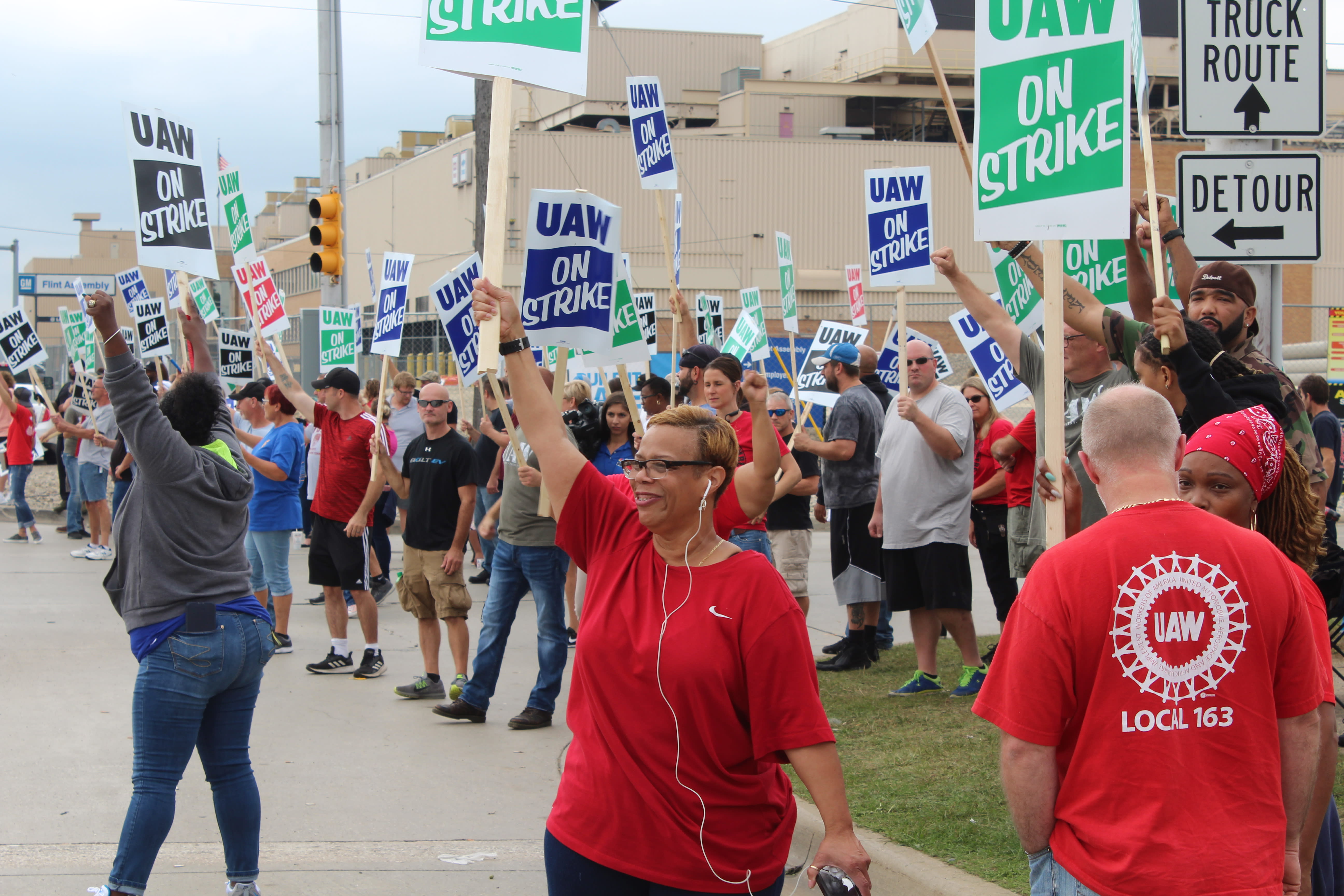 United Auto Workers members with General Motors picket outside of one of the automaker’s truck plants in Flint, Mich. on Sept. 16. The union called a strike against the automaker after a deal was not reached by a Saturday night deadline.Michael Wayland / CNBCGeneral Motors is temporarily laying off roughly 1,200 workers at its final assembly plant in Oshawa, Canada due to a slowdown at U.S. plants while the Union Auto Workers are on strike, the company’s Canadian arm confirmed to CNBC on Wednesday.GM Canada didn’t say how long the employees would be furloughed. It attributed the cuts to the UAW strike in the U.S., saying the Canadian plants have to reduce their production of GM pickup trucks by half since they can’t get the components needed from the U.S. plants, which are currently shut down.The GM Oshawa plant in Ontario, Canada builds the outgoing Chevy Silverado and GMC Sierra pickup trucks as well as the Chevrolet Impala and Cadillac XTS sedan. GM confirmed that its full-size pickups at the plant are the ones affected by the strike. It said other operations in Canada, including the CAMI assembly plant and St. Catharines powertrain plant, “remain unimpacted at this time and we continue to monitor the situation.GM said the roughly 1,200 workers who have been temporarily let go will receive layoff benefits under the terms of the automaker’s collective agreement with Canadian trade union Unifor, which did not immediately respond for comment.Roughly 48,000 United Auto Workers with the automaker went on strike on Monday. The union and the automaker were not able to reach a deal by a Saturday night deadline, so UAW leaders called for the first national strike against GM since 2007.After the strike was called, negotiations between GM and the union resumed on Monday morning and have been ongoing on a daily basis, but the sides have not been able to reach an agreement yet. The talks, according to officials, have been “progressing.”Wall Street analysts estimated that GM is losing up to $100 million a day in lost U.S. production due to the strike.The automaker’s decision to temporarily layoff workers in Canada shows that the strike is spreading to other units. If that continues and it impacts the automaker’s supply base, companies and workers outside GM could soon be impacted by the strike and laid off as well.A GM spokesman said the layoffs at this point are isolated and not impacting other operations.GM’s suppliers haven’t been impacted by the strike yet, but that could change, especially the longer it drags on, Citigroup analysts said in a research note to investors this week. Its suppliers with the biggest exposure include American Axle, Magna, Lear and Aptiv, according to Citigroup.Impasses in the negotiations, according to people familiar with the talks, have included pay, GM’s usage of temporary workers, potential closure of plants and health care contributions.Correction: This article was updated to correct the number of layoffs to 1,200.

What changed in the new statement
FAA chief says he won’t certify the 737 Max until he flies the plane himself
To Top
error: Content is protected !!
Top