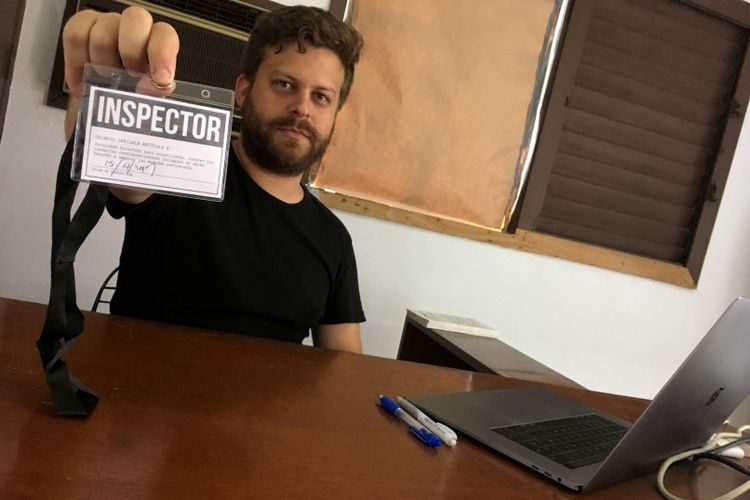 
In an unofficial group show, the Cuban artist Leandro Feal stages a performance against the controversial Decree 349
Photo: REUTERS/Sarah Marsh


The sweeping Havana skyline—with its Modernist towers and colonial buildings coloured golden yellow, bubblegum pink and lime green—is strung together by the Malecón, the city’s expansive esplanade and seawall. In its northernmost corner, Cuban artist Jorge Otero has positioned dozens of vintage chairs, sourced from neighbours and friends, like a bandstand. As the sun sets, the installation comes to life with a classical music concert.

Otero’s Puesta del Sol is just one of around 70 installations lining the Malecon for Detras del Muro, an exhibition curated by Juan Delgado during the 13th Havana Biennial (until 12 May). After a nearly four-year delay (the 2017 edition was postponed due to Hurricane Irma), the biennial opened last week with work by more than 300 artists installed in institutions and public spaces across the city. Organised under the optimistic theme Constructing the Possible, much of the work in the biennial draws on ideas of collaboration, agency, and an ability to connect across borders. These ideals stand in contrast, however, to the Cuban government’s recent crackdown on dissident artists on the island who have called for the repeal of a new law known as Decree 349, which would force artists and venue to seek official approval before staging shows.

Perhaps because of the, some of the works in the biennial take an oblique approach at responding to social issues. Down a bustling street deep in the heart of Old Havana, for example, the Mexican artist Tania Candiani has opened the windows of a sewing factory, giving viewers a rare chance to peer inside. There, dozens of female workers work diligently at their buzzing machines while a woman reads from a leatherbound text, her voice amplified by a microphone. Del Sonido de la Labor: La Lectora mimics a widely known tradition at the male-dominated cigar factories across Cuba, but through the work Candiani aims to empower the sewing factory’s mostly middle-aged female workers via texts that speak to women’s issues.

Other installations aim to pull back the curtain and focus on the invisible actors that can push a movement forward. At the state-run Factoria Habana gallery, the Colombian architect and artist Lucila Aguilar has installed La Ceiba, a dome-like structure made of Cuban bamboo that replicates those she has built for workers in Chiapas, Mexico. The workers there are taught to build the structure with a similar material found in the region. At El Oficio, a private contemporary space, Reynier Leyva Novo has installed a solo show, Un Dia Feliz, which rethinks historical representations of Cuba’s revolutionary heroes and focuses on the mechanics behind the image-making, by removing figures like Fidel Castro from famous photographs and showing just the background.

The unofficial exhibitions are more overtly political. The Bienal Sin 349, a project envisioned by the artist Luis Manuel Otero Alcántara, was designed to express Cuban artists’ dissent against the law. The exhibition, however, did not proceed as planned after Alcántara was arrested and detained for nearly a week. But the artist Abel Gonzalez Fernandez also curated a group show that takes aim at the decree, which did go ahead, with works by Leandro Feal and Novo, among others.

The 2019 Havana Biennial is a smokescreen for government censorship
Two shows that lost the plot
To Top
error: Content is protected !!
Top