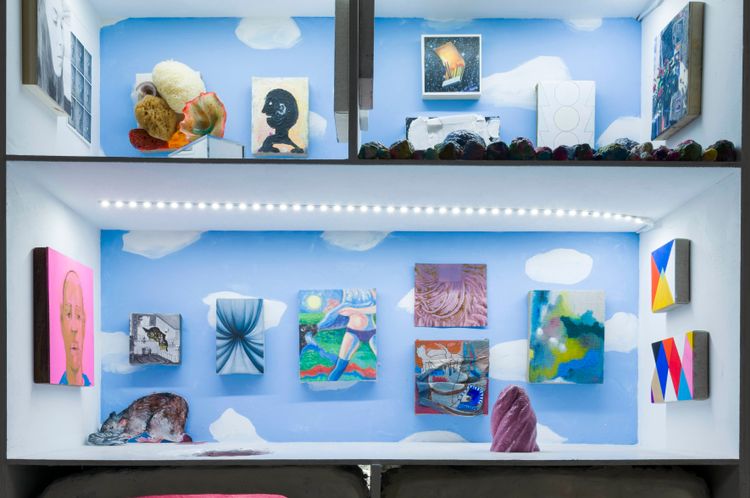 
It has more than twice as many artists than this year’s Whitney Biennial. It has more exhibition venues than Ralph Rugoff’s sprawling show in Venice. And yet you do not have to walk more than two or three feet to take it all in.

Adventurous and thought-provoking but remarkably free of big artistic statements and the attendant egos, an exhibition at the artist-run project space Serious Topics in Los Angeles might be the antidote to the international biennial surveys opening next month. The artists who organised the show, Kristin Calabrese, Joshua Aster and Torie Zalben, call it Dreamhouse vs Punk House (Plus Cat House). Very few of the nearly 200 miniature paintings and sculptures included measure more than 5 by 5 inches and most are significantly smaller—beautifully installed in three hand-built, high-rise dollhouses, each with its own character.


“You don’t even have to turn your head to take it all in,” Calabrese offered during a visit to the dollhouses, set up in a building where she and Aster share studio space and have a workshop for making custom stretchers and canvases for other artists. They also handmade the mini-canvases for the artists in this show, after asking them each which size they preferred and providing linen and wood panel options (with or without a gesso ground).

The artists, who mainly come from Los Angeles, clearly had fun with their contributions, from the demonic happy-face painting by Kenny Scharf, installed like a gargoyle at the top of the Punk House, to the 3D-printed magenta mound by Katie Grinnan that represents the electrical activity of her brain while dreaming. The hyper-detailed post-it-note-sized paintings and drawings are especially satisfying: Calabrese painted a wobbly John McCain; Elizabeth Tremante made a figurative painting within a micro-painting so dense that it comes with a magnifying glass nearby for easier viewing; Karl Haendel did a meticulous pencil drawing of a backwards question mark that has particular power at this size, like a whisper that will not go away.


A few floors of Dreamhouse, with a magenta 3D-printed sculpture by Katie Grinnan at left
Photo: Ruben Diaz


But most of all, it is the playful and thoughtful hang of works under one small roof (or rather three) that is mesmerising, with each gallery getting its own lighting and wall treatment. Several galleries in the Cat House, for example, have cloud images on the walls that nod to John Baldessari’s surreal installation for the 2006 Magritte show at the Los Angeles County Museum of Art. The curators mentioned that wallpaper as a point of inspiration in their release, others being “Louise Bourgeois house drawings, James Castle structures, Barbie, America”.


The works range in price from $29 for a Semra Sevrin photograph to $12,000 each for pieces by Mary Weatherford (a sponge and shell assemblage-painting), Henry Taylor (a toxic yellow painting that says “Bad Brains”) and Linda Stark (a stylised painting of an eye crying). Most are under $500. But the curators have begun talking to institutions in the hopes of keeping the whole thing intact, the idea being that they could, if needed, ask artists to remake the works already sold to individual buyers. And in a world of tiny egos, the collectors would not even be upset.