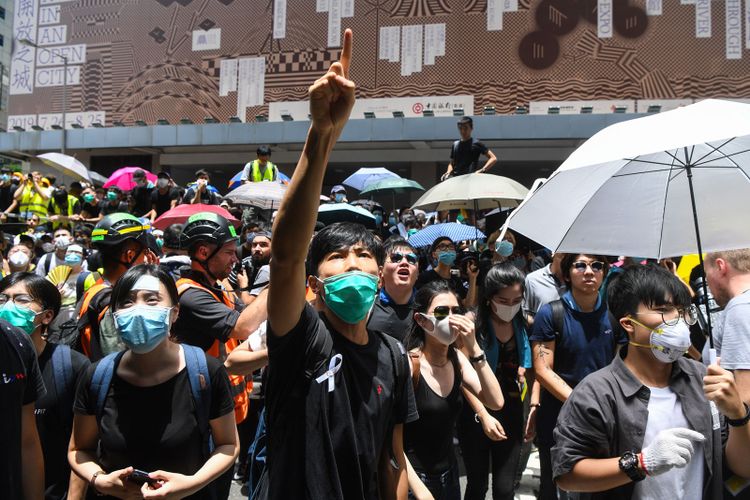 
Thousands of protesters surrounded the police headquarters in Hong Kong today, calling for an extradition bill to be scrapped
© Anthony Wallace/AFP/Getty Images


Today thousands of black-clad young protesters gathered outside the Hong Kong police headquarters in Wan Chai in a fresh round of demonstrations demanding a full withdrawal of the controversial extradition bill. They have asked the city’s chief executive Carrie Lam to step down, demanded the release of those arrested and called for an independent investigation into the police’s questionable use of force against unarmed protesters and journalists on 12 June.

It is the fourth large-scale rally against the extradition bill in less than two weeks since the large-scale, peaceful protest on 9 June, where more than one million people took to the streets. A week later, on 16 June, the number of protesters went up to two million. The people of Hong Kong are afraid that should the bill become law, suspects of any nationality who are living or travelling through the city will be extradited to mainland China, where rule of law does not exist. They fear it will tarnish Hong Kong’s independent judiciary, which is supposedly guaranteed under the “one country, two systems” principle, and will turn Hong Kong into just another mainland Chinese city. The bill has been suspended, but there is a chance it could be revived.

Some of the scenes are reminiscent of the Umbrella Movement of 2014, when protesters occupied the city’s main streets for 79 days demanding universal suffrage unscreened by Beijing. But the ongoing extradition bill protests are unleashing Hong Kong’s creativity even further: it is a leaderless, democratic political movement that is a result of collaborative efforts from the tech-savvy millennials who are best at identifying creative solutions. They communicate and organise themselves via relatively secure platforms such as Telegram and FireChat. They create illustrations, street art, infographics and even animation to spread their word. Much of Hong Kong’s art scene is also standing in solidarity with the young protesters.

History has proved that the best art is made in times of crisis. For decades, this former British colony lived through economic prosperity, but the generally peaceful life did not offer the most fruitful soil for artistic creation.

In the 1980s and 1990s, at the time of the Sino-British Joint Declaration, which decided the 1997 handover of Hong Kong from Britain to China, Hong Kong artists and filmmakers responded to the anxieties over its future, making some of films that continue to be among today’s favourites—but art belonged to the minority and was outside of the discourse of Chinese contemporary art.

The crisis facing Hong Kong now is much bigger. Back then, it was the fear of the unknown, and now the unknown has become clear: the young generation is pessimistic about its future, and is battling against China’s tightening grip over Hong Kong, the erosion of the city’s freedoms and autonomy. They distinguish themselves from the youth in mainland China, who are growing up behind the “great firewall”, enjoying the pride and benefits brought by the country’s accelerated economic progress over the past decade.

Hong Kong’s resilience and the immense creativity are likely to be transformed and distilled into an artistic language that will impress a global audience. Art created in the post-handover period, such as works by Lee Kit and Samson Young, is already earning a place in the international spotlight. And independent art spaces and platforms will have a bigger role to play because art made at the grassroots level will speak for the people.

The political unrest might challenge the stability required for a financial hub and art market, but there is no better time for the future of Hong Kong art.