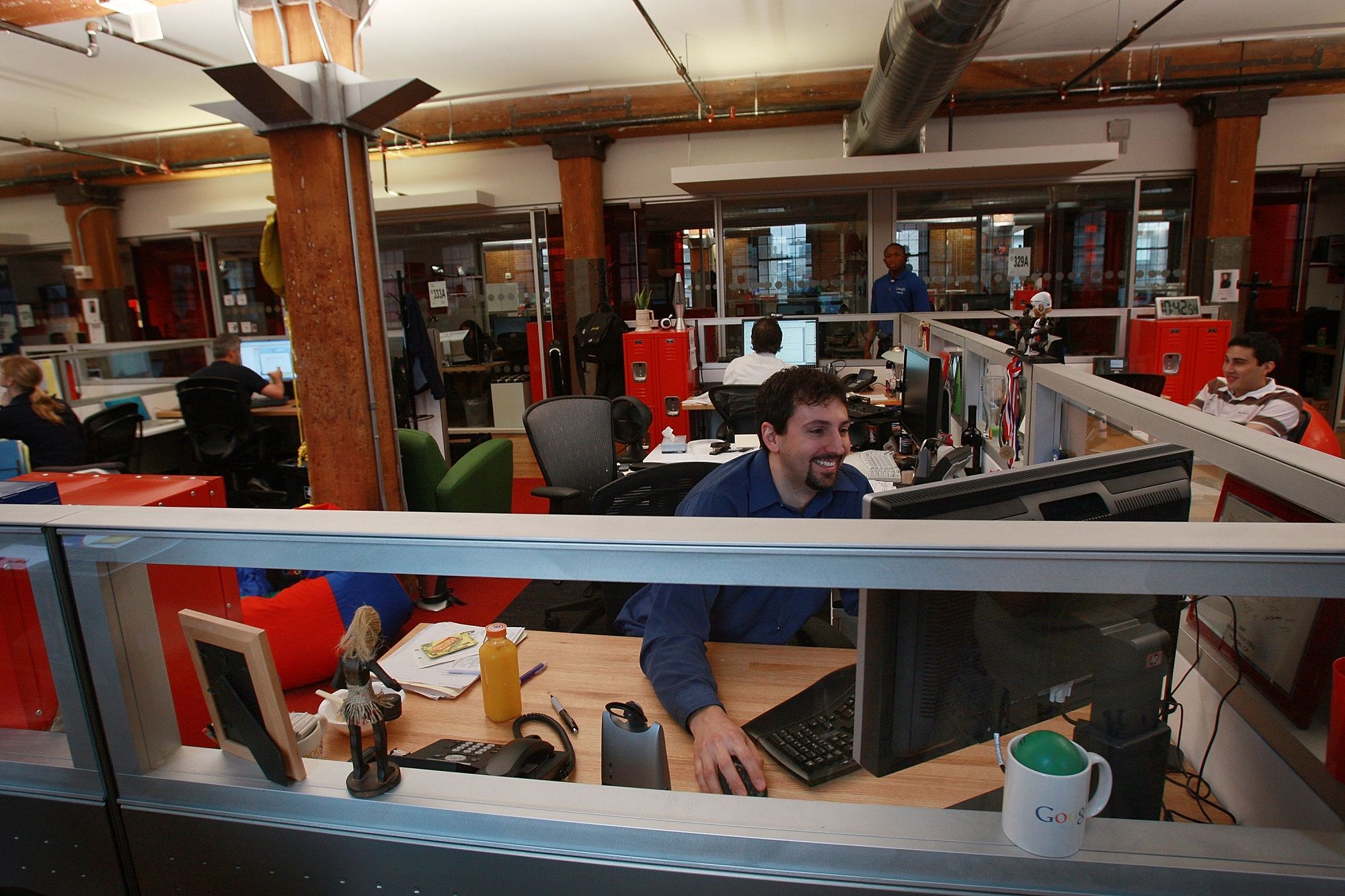 When recent college graduates and friends Zuhayeer Musa and Zaheer Mohiuddin started to break into the software industry, everything they found on the internet about engineering jobs seemed to be missing the actual information they needed: How much do these jobs pay?

Software engineers straight out of college often make six-figure salaries, not counting equity compensation. Depending on seniority, some coders make millions of dollars per year. But where on that spectrum any given engineer lands often depends on a single number — what’s often called a “level.”

At Google, for example, entry-level engineers start at Level 3. Apple has five levels for engineers, from ICT2 up to ICT6. Microsoft’s system starts at 59 for a software development engineer and goes up to 80 for a “technical fellow,” or one of the leaders of their given field.

The higher your level is, the higher your compensation — and Musa and Mohiuddin realized that their peers had a lot of questions about how the levels worked. If a Level 4 at Google gets a new job at Facebook, what level should they be? If someone gets promoted to ICT3 at Apple, how much should they make?

“In this new age where churn rates are very high, people are hopping around much more than they used to be,” Musa said. “It’s useful to know about levels if you’re going to Facebook to Microsoft to Amazon to Google, you want to know where you’re coming in and what your level is.”

So the two friends made a website to crowdsource Silicon Valley salary data from workers at big tech companies, and it took off.

“It’s personal for me. I was going through a job transition myself, I had only 2 years experience but had gotten promoted,” Mohiuddin said, adding that he’s seen friends get screwed over when changing companies.

“We both decided why not build a simple, visual tool, showing levels across the different companies?” Musa added.

street sign reading ‘Hacker Way’ is seen in the parking lot of the Facebook headquarters in Menlo Park, California.

The crowdsourced data on levels.fyi shows that software engineers get paid extremely well at companies like Google, Facebook, Amazon, Apple, and Microsoft.

Levels.fyi estimates that a Level 3 at Google, or an entry-level engineer who likely just graduated from college, should make $189,000 in total compensation, or about $124,000 in salary and $43,000 in stock compensation. At Facebook, an E3 — an entry-level “software engineer 3” — should make $166,000 per year total, according to the levels.fyi estimate.

Compensation goes up as level goes up and can even accelerate in an exponential fashion, the website’s founders said.

For example, at Google a Level 7, which is considered the top level for the vast majority of engineers, can make $608,000, according to levels.fyi.

“It differs from company to company, but a bunch of companies have converged on almost the same system where there will be about six levels,” said Osman Ahmed Osman, a former Quora hiring manager who is now writing a book on technical recruiting. Each level has a slightly different job title at each company, but they closely correlate.

“Google and Facebook are examples of companies where things are pretty similar,” he continued.

The companies do have slightly different nomenclature. Apple’s levels, for example, are called ICT, for “individual contributor tech.” Salesforce’s levels are called MTS, for member of technical staff.

The data on Levels.fyi is crowdsourced, which raises several risks that the data may be unreliable, including a self-selecting population — after all, the people most likely to submit their compensation details are those that make a lot of money.

But the founders of levels.fyi stand behind what they’ve collected and how they remove outliers and other unreliable data points, and say it matches up closely with the kind of compensation datasets that firms like Radford or Connery Consulting sell — and they claim that that recruiters and HR people tell them they rely on it.

They also point out that the website enables people to drill down into each given estimate to see specific data points, including the submitter’s speciality and location.

Engineers who have achieved a level at a big company wonder what level they might be at a smaller firm — and whether that comes with a pay bump.

“Most companies will have compensation bands that basically specify that if you’re level three then your salary range has this low end and this is the high end,” Osman said.

But companies aren’t always transparent about what the range is for any given position, which makes negotiating for more money even harder, which is why Musa and Mohiuddin decided to crowdsource that information.

“You’re probably making six figures if you’re a software engineer,” Musa said. “But there are senior engineers making crazy amounts in the millions. It’s eye opening, and that’s why we built this.”

“Something that we’ve found that people value on the site is that we tie compensation to a specific level. Glassdoor or other pay sites don’t make the connection between level and pay,” he continued.

“A lot of people who see our site can’t believe the numbers initially. I thought that too,” Mohiuddin said. “It’s pretty wild. Some folks with a few years experience are making a couple hundred of thousands of dollars.”

The downside to the leveling system is that there can be an up-or-out culture based on the levels, Musa said. Another downside is that that the laddering system could exacerbate the diversity issues big tech companies face.

“If you’re a candidate it’s really hard for you to navigate, and of course that has implications on fairness and diversity,” Osman said. “If you’re letting people earn more just because they can negotiate their way to the higher end of the band, you end up with white men who are overpaid and other people who are not encouraged to negotiate who tend to be underpaid.”

The leveling system may also drive upward pressure on salaries throughout Silicon Valley, which is great for technical employees in high demand, but contributes to a high cost of living that can make it hard for people in less remunerative industries to live in the area.

“As a general trend, I think what happens is every time Google and Facebook realize they’re losing too many mid-level career folk, they bump the compensation level up,” said Harj Taggar, the founder of Triplebyte, a software company that places engineers at tech companies like Apple.

“The Uber or Slacks are going to need to increase their base salary, and when the Uber and Slacks start pushing their salary up, then the Series B and Series C startups need to push their salaries up,” Taggar continued.

Facebook and Google tend to lead the market for software engineers, and their salary hikes set the pace for Silicon Valley, he continued.

“The rising compensation of Bay Area software engineers, the source of that is Google and Facebook,” Taggar said.

If there’s a weak spot in the levels.fyi data, it’s at the very highest levels, where an individual engineer can earn millions of dollars.

“When you start getting into 4 or 5 years in, the people who are more naturally skilled have the opportunity to show just how much more productive they are,” Taggar said, and that’s when compensation can balloon.

Turns out, there just aren’t many people at the highest levels.

For example, while most Google engineers realistically see Level 7 as the cap for most careers, some particularly distinguished software developers can go higher. Jeff Dean and Sanjay Ghemawat, who are among the most skilled coders in the entire world in Google’s system, have achieved Level 11, according to a December 2018 profile in The New Yorker.

“It’s kind of pyramid shaped that the higher you get up that ladder, the fewer people there are at that level,” Osman said.

“The majority of engineers fall between L3 and L5 if we’re using the generic levels. At most companies, staff level is somewhat of a career level, and you can be at that level at the rest of your life,” Mohiuddin said.

Osman says that although Silicon Valley companies often act as if they invented the technical ladder, it’s actually been in place for over 70 years at various companies.

He’s tracked the origins of the system to DuPont in the post-World War II era, and says that it was invented to give talented technical people an ability to grow and progress in their careers without joining management and climbing that ladder.

The manager ladder wasn’t “interesting for technical people because they don’t want to be managers,” Osman said. “They want to continue doing technical work.”

The levels.fyi founders are expanding and collecting data from different fields now, and finding that those professions often have their own ladders, too.

Up next for the duo: finance.