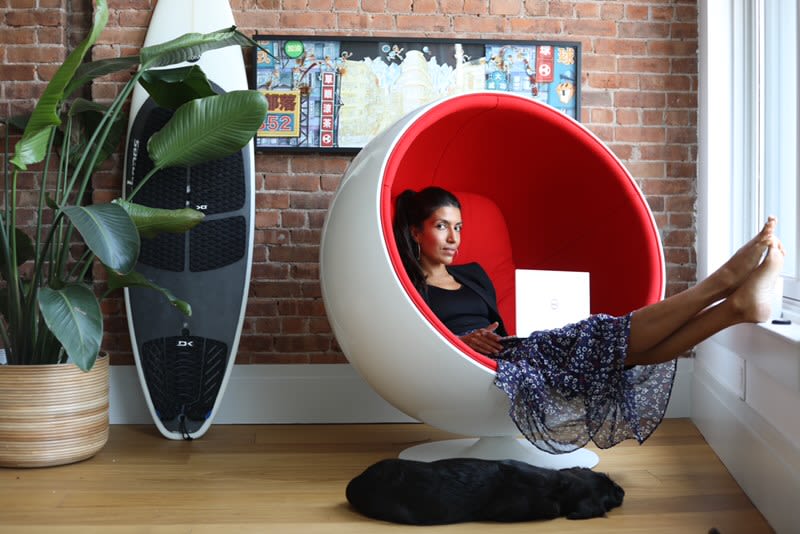 Leila Janah, a social impact entrepreneur, was diagnosed with cancer at 36

Leila Janah, 36, thought she was doing everything right. She started two tech companies with a strong sense of social mission, and she balanced that by exercising every day, eating well and seeing the doctor for regular check-ups.

The last thing she expected was a cancer diagnosis.

But in the spring, she discovered a lump that turned out to be a type of cancer called a sarcoma. Sarcomas account for about 1 percent of adult cancers, and she has a particularly rare variety that showed up in her reproductive system.

In the months since her diagnosis, Janah has shared her experiences as a patient on social media, despite the potential risks that come from investors and customers being aware of her health challenges.

In the U.S. health care system, there are many barriers that prevent patients from accessing the treatment they need, whether it’s the cost, lack of specialists or the shortage of resources. For Janah, going public with her experience has helped her find both high-quality doctors and potential treatments, which could save her life.

In a phone interview, Janah said her entrepreneurial experiences have helped her navigate the complexities of the health care system, in part because she’s had a lot of practice advocating for herself as a female founder in Silicon Valley.

“I’ve had to be pushy,” Janah said. “If there’s anything this experience has taught me, it’s to not take no for an answer.”

‘I’m conditioned to trust my gut’

Before she was diagnosed, Janah had a feeling something that there was wrong. Her lump, which doctors reassured her was likely benign given her age and lack of symptoms, felt “ominous,” she said.

“Because of my work with start-ups, I’m conditioned to trust my gut,” she said, as entrepreneurs are often told that their ideas lack merit, or they won’t work by people in positions of authority. “And that’s especially true when something feels wrong.”

Janah insisted on further medical tests, and the results came back quickly. It was cancer. And it was rare and aggressive. So finding out sooner rather than later probably made a big difference.

Another lesson learned from her entrepreneurial career was to try to get as many opinions as possible, and then bring in a team to evaluate her options.

“That’s basically what you to when you’re shopping for a financing round,” she said.

But she quickly hit a wall. Her doctors all offered conflicting advice, which she suspects is because her cancer is so rare that there aren’t many previous cases to draw from. Despite her best efforts, she couldn’t get them to agree to a conference call together to discuss her case. Another challenge was in pulling her medical information into one place, including charts, labs and imaging, so that she could make sure all her doctors had access to the same ground truth.

That’s not surprising. Even today, it’s a laborious process for hospitals and clinics to exchange patient health information. Doctors still rely on legacy technologies, like fax machines and CD-ROMs, and their IT systems were not set up to make it easy to share data. At one point, Janah had to FedEx her imaging from California to New York because it was faster than getting two Manhattan-based hospitals to share a file.

For a tech entrepreneur, that’s been a particular source of frustration. “The admin has been the hardest thing,” she said. “I’ve got two medical experts who disagree, but they can’t even share a CT scan between two different hospitals down the street from each other.”

At that point, Janah took matters into her own hands again.

She saw that her busy specialists would all be attending a high-profile cancer conference, the American Society of Clinical Oncology, dubbed ASCO, in the fall. So she decided to fly out to Chicago on her own dime. She also hoped to meet with some of the executives behind a venture-backed bio-tech start-up called Epizyme.

Epizyme has a drug in development called Tazemetostat, which is designed for sarcoma patients. It remains an experimental drug, meaning it has not been approved by federal regulators. Patients can access such drugs on a case-by-case basis, and it’s a hotly debated issue among bio-ethicists about whether promising therapies that are still in late-stage clinical trials should be made available.

Janah’s trip was a success. She was granted access to the drug through the company’s Expanded Access Program, and she was able to get her doctors on the same page about her course of treatment. An Epizyme spokesperson declined to comment on her case, but did confirm that she met the criteria established by its policy.

Janah is now taking the drug, and she’s hopeful for the future. Meanwhile, she closed another round of financing for one of her start-ups. She was relieved that her investors got behind her, as she was fully transparent about her health struggles.

But in many ways, this experience has left her feeling conflicted and confused.

Janah’s professional life has been dedicated to two businesses, Sama and LXMI, which provide work opportunities to low-income people, notably women. She’s been one of the most vocal people in Silicon Valley about the importance of helping people from diverse backgrounds. “My company mission is aligned to my personal ethics,” she said.

But to help improve her own chances of recovery, she leveraged advantages that few others have: Her connections, her network and her resources. For instance, years ago, she was able to use her savings towards egg freezing — which costs roughly $10,000 — as a way to open up more options when it came to balancing her career with family planning. The experimental drug she’s taking for her cancer makes it unlikely that she can carry a child herself, so she’s relieved she made that decision.

“I’ve used every tool at my disposal,” she acknowledged. “I’ve had educational privilege, and my partner has a good job at a big company,” she said. “I also know that I can use my savings to cover costs that insurance declines.”

Arthur Caplan, a bio-ethicist at New York University, agreed with Janah’s assessment. Wealthy, educated patients or “those who are really good at social media or crowdsourcing” tend to have an advantage in accessing experimental drugs, as well as top specialists in the field.

Typically, he explained, doctors will advocate for these patients to drug companies. Drug makers face potential liability if a patient is extremely sick, so they make case-by-case decisions, which are often biased against older or lower income people.

These drugs don’t always work, and aren’t necessarily for the best course of treatment for every patient. But Kaplan and Janah are among a growing cohort of people who believe that it’s important to have a policy in place so that decisions aren’t made to favor the wealthy and the powerful.

“It is really tough on a lot of levels knowing that I have better care than others,” she said.

WATCH: Why Silicon Valley VC George Zachary is placing all his bets in biotech