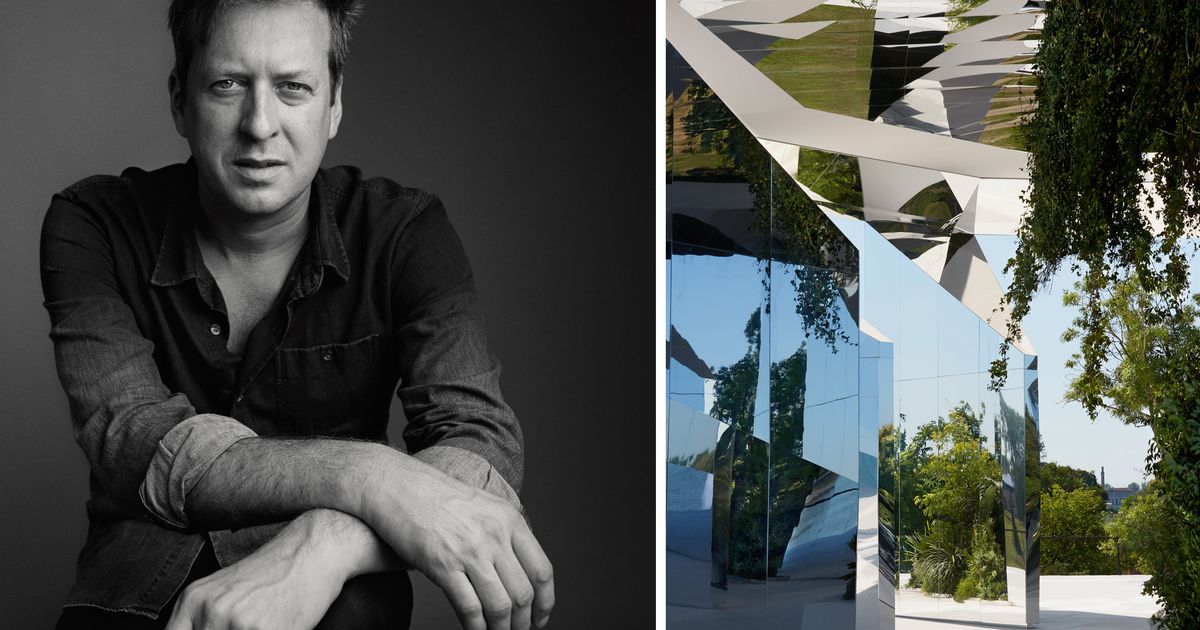 The US artist Doug Aitken’s large-scale work Green Lens was commissioned by Anthony Vaccarello, the creative director of Saint Laurent, to stage the fashion brand’s Menswear Spring Summer 2022 show in Venice last month. Doug Aitken explains the concept behind the work below. The Art Newspaper: How did the Green Lens project for Yves Saint Laurent emerge? Doug Aitken: It initially came out of a conversation with a friend Anthony [Vaccarello] who asked me to create an installation. The project was conceived over the last 14 months and was really born over Covid. I became very interested in the idea of creating a work that was post-screen; the world that we have lived in for the last year and a half has been consumed with digital information, screen-based information. I wanted to create a work that was a return to the real, to engage the viewer and centre the viewer into the present. And I thought, how do you create art that is active and not passive? How do you create something that is not voyeuristic, that you look at and you judge, but instead something that the viewer is an active participant in? I had the idea of using the physical world around me and finding a way to use the physicality of the landscape to create a convergence. I wanted to have something that was not inside a museum, not inside architecture, but instead that you had to seek out and discover.

Venice is an incredible city, historically speaking. But the place where the work is located has been abandoned for, I think, more than 50 years. It’s a small island that was a munitions depot for weapons in the late-19th century and early-20th century. In 1960, all the weapons were removed and the island was completely abandoned. It was kind of a destroyed place, like JG Ballard’s The Crystal World (1966). The more I learnt about the location, the more I became interested in the idea of ecology being affected by humanity.This became very compelling in creating the installation on the island, in a location that is over the water and looking towards the land and the forest. And I wanted this idea of a place that is asking questions about the future and provoking a discussion: where do we go from here? We have gone through this incredible arc of Covid: of questioning, international upheaval and disruption. But how do we turn this into a positive? How do we turn this period, this passage that we have experienced, into ownership of the future? I don’t think we really had that in the past. We were just going down the river with too few questions and too much blindness. So really, to me, it is kind of a pavilion of the present. It is a space that you go to and that you engage with. When you see it, it is circular, like a glass. It has multiple sides and everything is geometrically equal. There is no hierarchy. There is no special part. There is no exclusivity. Everything is kind of democratised. Venice seems a perfect location for this work because here the sky meets the sea.The location is interesting because this is one of the few cities in the world where we recognise the absolute connection of the ocean, the land and the sky. It is almost a connective tissue. Everything is one here and it creates a complete ecological system for us to work with or talk about.

It there a reference to Roman architecture or Renaissance architecture in the circular building?Probably subconsciously, but consciously I was more thinking of cinema, when you sit passively and watch a screen. That screen has just evolved over time; into your phone, your laptop, your computer. So how do we go past the screen? How do we break the screen and then come out the other side? In this situation, the geometry of the architecture was an attempt to break that by having nothing flat at all. Everything is made like a tunnel so that you continuously navigate a kaleidoscope labyrinth that has no beginning and no end. I wanted to empower the viewer to author their own work, so they become a subject of the work, experiencing and recording something. One might have a totally different experience of the work than I do. Maybe I’ll come back tomorrow and the light and wind will be different. Then the other aspect of the work that was important for me was that it is actually physically living. Inside the work and around the work we planted a forest. This forest is very dense and jungle-like with a mist that comes out from it. I was interested in the idea of an artwork that was growing and changing continuously, that was its own habitat and ecosystem.

I’ll tell you something amazing that happened: I’ve been out there every night until 2am or 3am and a few nights ago there was a rain storm. The next day I walked into the installation and I’ve never heard more insects in my life. These cricket sounds were wild. I realised that the artwork was becoming a house, inhabited by something that was not there before. It was so interesting hearing the work create its own music and composition through this. Like most pieces, this artwork is temporary, unfortunately. But when the it is finished, all the trees and botanicals will be planted in the earth and they’ll grow on this island. The work is actually like a block of ice that melts. It can melt into the soil and create its own root system. It can live there without us, into the future.Is ecology an issue that you want to address more often in your work? It’s something that I am increasingly interested in. But maybe what interests me is not only the ecological aspect, it is: what is landscape? Is the landscape inside us, is it subconscious? Do we project our subconscious on what we see physically around us or is it feeding us? What is the relationship between the individual and the world around us? Green Lens is a work that is activated by the viewer; it is not a photograph that you see on a page in a catalogue. It has a kind of physicality to it and as we move forward into the future and we look at what art is, I think as a society we want more from art. It is not enough that art is only this passive object. It is not OK that art is so often precious and commodified. We want to see that broken open. We want to see oxygen come out of it. For me this work is a small attempt to take that idea a little bit further.

Doug Aitken has used mirrors in his work before, such as in Mirage – a mirrored house in Gstaad, Switzerland
Photo: Stefan Altenburger. Courtesy of the artist

It is not the first time that you have used mirrors in your work. For instance, they appear in the piece Mirage displayed in Gstaad. Is Green Lens the next step?It is in some ways it is because Mirage was representational: it was the form of a house and the house was intentionally ordinary. I wanted the kind of house that you see not 1,000 times, but 100,000 times, and you forget you ever saw it. There is such a sense of familiarity and the viewer wants to go inside because they are subconsciously understanding. Green Lens is very different: it is a lens. It exists in a circular framework and is geometrically abstract. It has its own discrete narrative related to where it is placed and its site-specificity. There are two aspects in mirrors: there is the reflection of the image but also the reflection of what people think. Is this duality of the reflection important for you? Green Lens came out of my filmmaking. You become so aware of the subject, the author and the construct when you make moving images. The construct is the fiction; everything that is filmed is a fiction essentially. So what happens if you try to find a way to remove the author? Then the viewer becomes the fiction. Green Lens is a work that is like a tool to bring the viewer to the present. That present is almost a fiction because what you see is abstracted and completely kinetic and choreographed around you: the abstraction of life in space. In daytime the work is sunlight and the light is a composition that I wrote. Light and sound are composed to function together and to create a kind of synaesthesia.

In Green Lens, did you intend to create a narrative as well? The piece is definitely a kind of expanded, broken, fragmented narrative because there is no one story and there is no one perspective. That to me is a reflection of life. I think that is how we perceive life and how we navigate reality in shards of information and experience, with pieces that we are welding together all the time. We are searching for patterns of logic out of this maelstrom of information. A work like Green Lens is looking to embrace that instead of ignoring it. Instead of forcing things into the straight story, I want to liberate the viewer to accept this kaleidoscope of experience that we exist within. Is it the first time that you have had a commission from a fashion brand? I do not see it as a commission so much as a conversation that led to art. And now we have something to share! • This article was commissioned by The Art Newspaper France and will be published in its September issue

New York human rights organisation ‘racing against the clock’ to get Afghan artists to safety
Not all they seem: how galleries can spot fake ID documents
To Top
error: Content is protected !!
Top