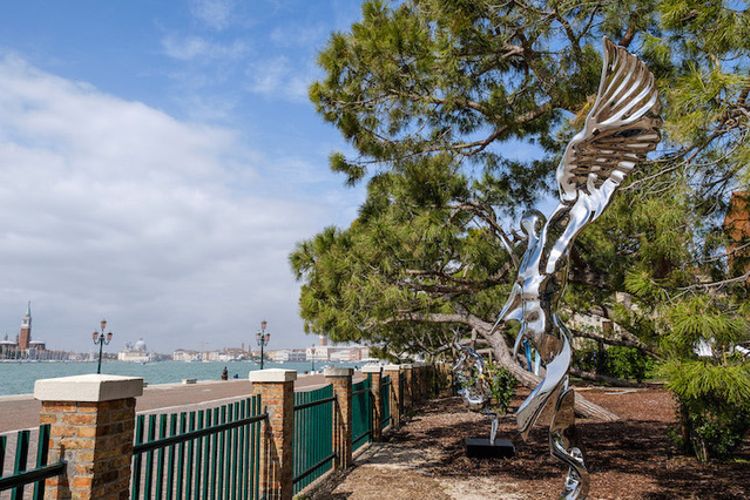 
Masoud Akhavanjam’s two sculptures, Dilemma of Man and Metamorphosis have been installed in Venice, they will be on show during the Biennale
© Alvise Busetto


Iranian works will abound at the Venice Biennale this year despite newly aggressive US sanctions that have driven down the country’s currency and raised new hurdles for curators.

The noted young Iranian curator Ali Bakhtiari is organising the official Iran pavilion with an exhibition of three artists inspired by the work of a contemporary Iranian poet. Iran’s culture ministry is footing the bill for the show and its new Grand Canal venue despite “many complications” and sharply higher costs from shipping, insurance and currency issues, Bakhtiari and ministry officials say.

Hadi Mozaffari, the director of the visual arts office of Iran’s Ministry of Culture and Islamic Guidance, says the sanctions were definitely “a big issue”. He adds: “We believed that art and culture would not be as affected by sanctions like the areas of health and medicine but when insurance companies do not insure our artworks, when we cannot easily ship pieces directly to Venice, when we pay our rents and payments with severe complications, the sanctions have affected us like they have affected the health industry.”

Elsewhere in Venice, the London non-profit institution Parasol Unit, under its Iranian-born founder Ziba Ardalan, is celebrating its 15th anniversary with a presentation of nine Iranian artists including Y.Z. Kami, Farideh Lashai and Navid Nuur, in the imposing Conservatorio di Musica Benedetto Marcello di Venezia. The show, The Spark is You, is backed by the UK-based Iran Heritage Foundation and Iran Society as well as the foundation of the collector Mohammed Afkhami, with a linked London show opening later in May. Inspired by the poets Goethe and Hafez its aims include “mutual respect and understanding between different nations and cultures”.

Little of the work is overtly political, Ardalan says: “The whole show is about tolerance and openness and dialogue…it is all about culture, and human values and hopefully what we were as Iranians and what we still are.”

For the show, the emigré artist Koushna Navabi has created a giant box of Biskweet-e Madar (Mother Biscuit), a traditional family brand in Iran, with concrete biscuits eerily similar to tombstones. The artist Navid Nuur has created giant weatherproof paintings for the building’s courtyard based on people’s scrawling on paper when they test pencils in shops.

In November 2018 the administration of US President Donald Trump unilaterally re-imposed the sanctions on Iran that were lifted under the nuclear deal of 2015. They target the country’s oil sales, the wider energy industry, shipping, banking, and insurance, and were specifically intended to dissuade other countries from trading with Iran. In April, the US designated Iran’s Islamic Revolutionary Guards Corps as a foreign terrorist organisation, adding further economic and political pressure on the country.