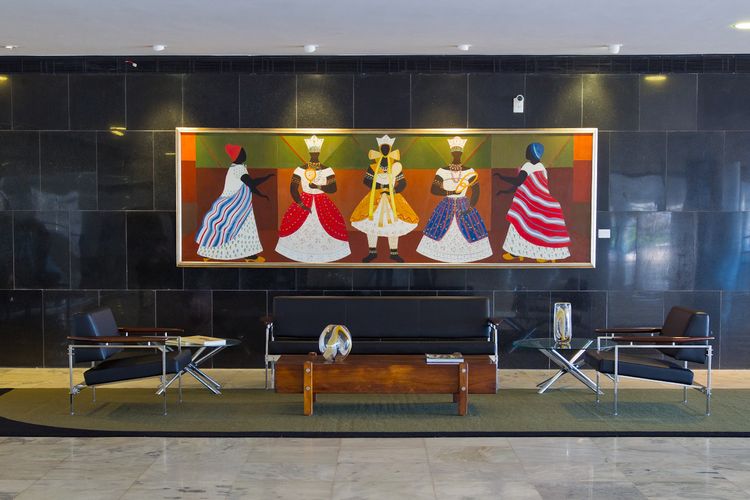 A painting depicting three deities of the Afro-Brazilian religion Candomblé has been removed from the Palácio Planalto, the official workplace of the Brazilian president in Brasília. The painting Os Orixás (1966) by the Brazilian artist Djanira da Motta e Silva, known as Djanira, has been moved to storage and replaced with a replica of another of the artist’s work called Praia de Nordeste (around mid-1960s)—a decision that has sparked debate around the historic intolerance of Afro-Brazilian religions and culture in the country. The general secretariat of the president recently confirmed to the Brazilian magazine Piauí that Os Orixás was removed in December 2019 and that the decision was part of “a normal procedure that aims to ‘rest’ and rotate artworks as a preventive conservation measure, in accordance to good museological practices”. Curiously, however, a video recorded in June 2019 during a visit of Evangelical leaders to the Palácio Planalto suggests that the work was removed even earlier.The video also shows that the replica work, which holds no religious significance and depicts a colourful scene of fishermen on the beach, is mislabeled as Pescadores (1958). The secretariat confirmed that the piece is a “print plotted on canvas” that emulates an oil canvas, and acknowledges the error on the nameplate, which will be corrected. Rogério Carvalho, who served as the curator of the Palácio Planalto and the Palácio da Alvorada in 2009 during the second term of the president Luiz Inácio Lula da Silva, says that government’s explanation of rotating the works for conservation purposes is “absurd”, and that “government palaces are not museums”, in an interview with the newspaper UOL. He says there is no justification for replacing the work with a replica, and that the piece was in excellent condition and did not require conservation.Carvalho adds that the “state is secular, and if there is a saint or a crucifix in the president’s room, then there should also be the Orixás […] in the most noble space of the building”, and argues that the work should return to public view. “Art cannot be seen as decorative [because] it is not—it has its function,” he says. “Visitors who come from the outside need to see our best.”Yet another curatorial paradox related to the unannounced replacement of Os Orixás is that the original version of Praia de Nordeste is now on view in a room on the third floor the Palácio Planalto, meaning that the building is currently exhibiting the original work and the replica at the same time, and in places separated by just a few metres. There is no recorded administrative process that dealt with the replacement.President Jair Bolsonaro is alleged to have removed the piece at the request of his wife Michelle Bolsonaro, an Evangelical Christian. Controversy around the painting first came to light in December 2018, when the newspaper Folha de São Paulo reported that the Brazilian first lady planned to remove works with images of Catholic saints at the Palácio da Alvorada, the presidential home in Brasília, and that the painting Os Orixás was also of concern, according to three staff members at the Palácio Planalto.The report also suggested that Os Orixás would be loaned to the Museum of Art of São Paulo Assis Chateaubriand (Masp) for a major travelling retrospective devoted to Djanira that was held in March last year. But in a statement to The Art Newspaper, a spokeswoman for the museum denied that the painting would be included in the exhibition, and that its deal with the government to acquire the work, which is estimated to be worth between $R3m-$R4m, never materialised.Bolsonaro addressed the issue in a live social media broadcast last year, stating that there was “no religious conflict”, and that such reports were “not productive” for the country. But the story served to underline the administration’s treatment of marginalised groups and its attitude toward the arts sector, which has been hard hit since Bolsonaro took office and slashed the ministry of culture and federal funding for several cultural productions deemed to uphold non-conservative values. The late artist Djanira, one of the best-known Brazilian women artists, was a devout Christian but took an interest in themes tied to the Afro-Brazilian religions Candomblé and Umbanda, which are the subjects of her most important works. Works similar to Os Orixás—which vividly depicts the Candomblé deities Iansã, Oxum and Nanã, as well as two devotees—are held in major collections, including the Pinacoteca de São Paulo. Bolsonaro’s policies have been at odds with black Brazilians since his 2018 campaign, during which he voiced frequent racist rhetoric against Afro-Brazilian and Indigenous populations. Among these instances, in a television interview with Globo prior to the election, Bolsonaro expressed that the Brazilian government had no debt to Afro-Brazilians who are the descendants of slaves, and that Portuguese colonists “never stepped foot in Africa”, claiming that African leaders themselves turned over slaves. The issue has been heightened during the Covid-19 pandemic, which has disproportionately impacted Afro-Brazilian communities living in the slums. Last month, a coalition of 50 anti-racism groups including the Black Coalition for Rights filed a lawsuit for the opening of a trial to impeach Bolsonaro based on “crimes against the life of the black population” amid the pandemic, stating that Bolsonaro’s denial of the coronavirus, which he likened to a “mild cold”, is like a “genocide against black people”.