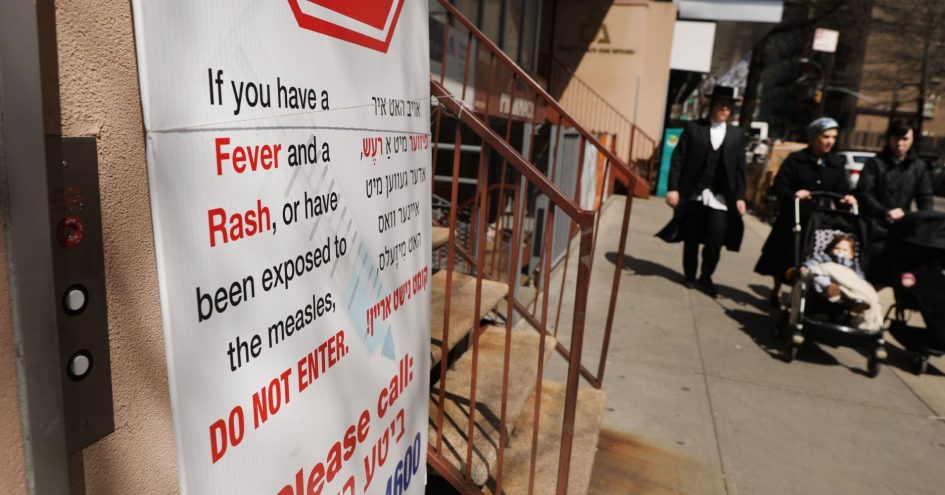 “I can’t tell you if your individual child will do well or poorly with measles. We don’t want parents making that risk,” Clark said. While the majority of kids who contract measles recover, there’s the fear of infections alongside it. Some may end up with pneumonia, major diarrhea or swelling of the brain, Clark added.

More than 90 measles cases were reported across 20 states in a week, the CDC said Monday. That brings the total this year to 555, the second-highest number of reported cases since federal health officials declared measles eradicated from the U.S. almost two decades ago, according to the CDC.

Measles, which is highly contagious, can live in the air for up to two hours after a person carrying it has left the room and infects roughly 90% of the people who are exposed to it.

“Measles does not discriminate,” he said. The Peach handbook “is a terrible document. … They really focused it specifically on this Jewish community to play on their religious beliefs.”

The Orthodox Union, one of the nation’s largest Orthodox Jewish organizations, even came out in favor of vaccines in November, saying the measles outbreak could bear “very serious consequences.”

However, it’s been hard to squash the fear once it’s been implanted in a parent’s mind.

“It’s easy to poison the well in the sense that once you install fear in someone’s mind it’s very difficult to get that fear removed,” O’Leary said. “Taking a fear out of someone’s mind is much more difficult than putting it in.”