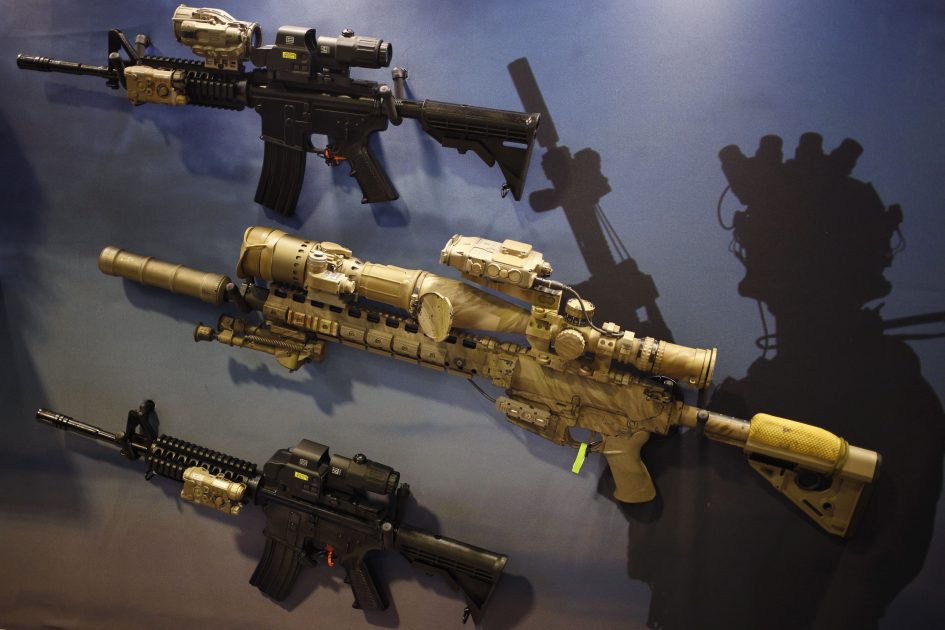 Military rifles are displayed at the L3 Technologies Inc. booth on the exhibit floor during the Special Operations Forces Industry Conference (SOFIC) in Tampa, Florida, U.S., on Tuesday, May 22, 2018.

L3Harris Technologies is wasting no time now that its deal is complete. The new $43 billion aerospace and defense giant, the result of a so-called merger of equals between Harris Corporation and L3 Technologies, has officially become the sixth largest U.S. defense contractor. The new company has $17 billion in annual revenue.

On Monday, L3Harris unveiled plans to return some cash to shareholders through a 10% dividend hike and a new $4 billion share repurchase program authorized by a newly composed board of directors. The company expects to repurchase $2.5 billion in shares over the next twelve months, replacing Harris’ and L3’s existing share repurchase programs. Additionally, the dividend will to be re-evaluated in the first quarter of calendar year 2020.
To oversee the financials, Jesus “Jay” Malave Jr. is becoming chief financial officer as well.

‘We are a technology company’

With the deal done, the management team, headed by chief executive and chairman, Bill Brown, and chief operating officer and vice chairman, Chris Kubasik, will assess the different businesses and determine if and what will be divested – a game plan they discussed in an interview over the weekend.

“At the end of the day, we are a technology company, so we are going to be in businesses where technology investments drives differentiation,” explains Brown, who will run the company as CEO for the first two years, before ceding that role to Kubasik. “Twenty thousand of our 50,000 employees are engineers and scientists, so it’s fundamental to what we do and who we are, and we will use that clearly as an important lens for the business we will be in. “We want to be a leader in the segments we are in and offer an attractive return to owners, so that’s how we will look at it,” adds Brown. “No decisions are made yet.”

As part of the deal, Harris Corporation said it would sell its night vision business to the U.S. subsidiary of Israeli contractor, Elbit Technologies, for $350 million. To get the merger done, regulators made that divestiture a condition; Harris had already struck the deal with Elbit.

Harris and L3 shareholders now own roughly 54% and 46% of the combined company, respectively. The deal became official on June 29th, on the heels of the closure of Harris’ fiscal 2019, which ended with the Friday trading day.

“Ultimately it’s about resilience and secure communications – electronic warfare is an example. We need to be able to have situational awareness in all domains…and get those to work together,” explains Kubasik.

At a time when the concept of connectivity and network rollouts like 5G are in the global spotlight, spectrum superiority is a crucial area of focus. L3Harris plans to dedicate roughly 40 percent of its investment dollars to spectrum superiority. “People talk about spectrum as being both congested and contested, and L3Harris brings to the table the ability to transmit information in any spectrum for network resilience and that’s really a key part of the capabilities,” says Brown.

In addition to L3Harris there have been a spate of deals within the aerospace and defense sector, including, last month, another proposed merger of equals between United Technologies and Raytheon – a mega deal that stunned experts and for which skepticism has been raised by both President Trump and several high-profile United Technologies shareholders.

Some analysts have questioned whether the renewed consolidation of the sector more broadly over the past several years could be signaling a peak for defense dollars.

But Brown points out that over the last three years the Department of Defense budget is up and, for fiscal 2020, whether it’s the mark-ups coming out of the administration and Senate or the House of Representatives, the budget is poised to increase again this coming year.

Currently, the Senate’s legislation proposes a top-line number of $750 billion, while the House’s bill would be $733 billion. The overall fiscal 2019 defense budget is $716 billion. Looking to the future, the five-year plan proposed by the Trump administration would increase the defense budget each year.

“The reality is we live in an environment where there are numerous global threats, plenty of competition in places like China Iran, North Korea, and Russia,” says Brown.

Also significant, Kubasik points out, is the increasing amount of money the federal government is looking to allocate to research and development: “I think it highlights how the Department of Defense wants more agile, affordable systems. It gives us the opportunity to get on these newer systems and newer programs.”

In other words, L3Harris believes the domestic defense budget is lining up with its capabilities.

International sales – which currently account for about 23 percent of revenue — will also be in focus, with management calling it one of the key parts of the company going forward.

“When you think about the combination of L3Harris together, we are offering a whole lot more innovation because we are investing a lot of R&D, we’re an efficient solutions provider, and 40% of our total savings are going back to the customer in the form of cost-plus contracts that drive more affordability,” says Brown.

Adds Kubasik: “It does create another competitor and that’s…why it’s been so well received by customers, Wall Street and our workforce… are you creating competition or eliminating it. Ours clearly creates it.”

Shares of Harris Corp. and L3 Technologies had both surged more than 45 percent in the past six months. Beginning Monday the newly combined company will trade under the ticker “LHX” on the New York Stock Exchange.