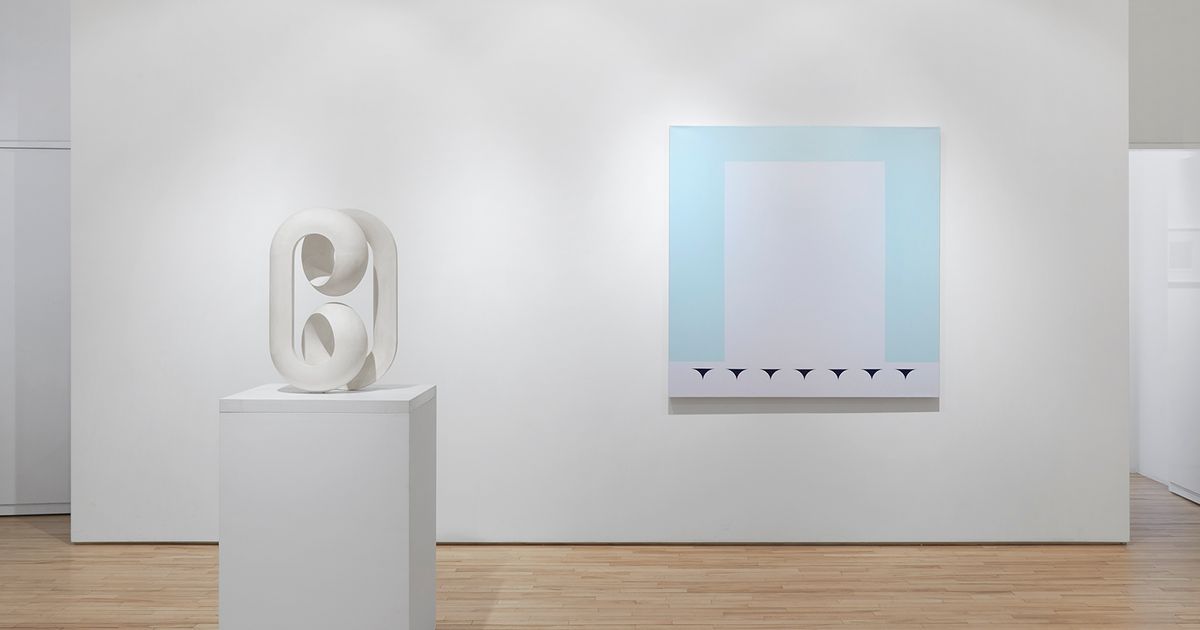 Paul de Monchaux and Tess Jaray first met as students at the Slade School of Art in the 1950s. Their friendship was then rekindled in 1986 when they both took part in the Stoke-on-Trent Garden Festival where de Monchaux showed sculpture in the Whitechapel Gallery Garden and Jaray presented her first brick floor piece. As each went on to pursue their separate careers they remained in contact, exchanging ideas, thoughts and influences and discussing common interests while also each exploring their very own very particular relationship with abstraction.Over the ensuing years they also went on to make important public projects—including Jaray’s floor for the concourse of Victoria Station, her forecourt for the British Embassy in Moscow and the Wakefield Cathedral precinct and De Monchaux’s war memorial in Norwich, stone sculpture complex in Birmingham’s Oozells Square and carved granite memorial to Wilfred Owen in Shrewsbury. In addition, they have both been hugely influential teachers. Jaray was the first woman to teach at the Slade, and taught there for more than 30 years, where her former students included Martin Creed and Rana Begum, while De Monchaux taught at Goldsmith’s and latterly at Camberwell College of Art, where he was the head of sculpture and fine art. Now for the first time, De Monchaux and Jaray are showing together. Correspondences, the appropriately titled exhibition of their recent work at Frestonian Gallery, is a testament to their years of rich dialogue. Throughout there are profound and evident affinities between the invented forms of De Monchaux’s lucid non-representational sculpture and Jaray’s crisply executed, hard edged paintings, where in each case geometric rigour is always tempered by a very human subjectivity. “There are several things you mention where I see we share the same territory or drink from the same cup,” Jaray notes in an email from 2006. “You speak about the work being ‘based on architecture’. It is the same for me, although I would put it differently: I have always thought that the influence of architecture for me has to do mostly with its emotive impact. How a building, structure or place makes me feel.” For his part, De Monchaux writes to Jaray: “Among its many uses, geometry provides a means to coordinate the seen with the sensed. The process itself has its own poetry regardless of the application.” In another email he talks of the artist’s need to animate “plain graphite, pigment in a tube, inert clay or stone, geometry, the musical scale, art conventions. They need to be given the kiss of life, to be woken up, to be made startling.” For both precision is also key. Writing to Jaray in 2011, De Monchaux states that “geometry, proportion and number have always been sacred powerful evidence of god’s ordering work”, while in July 2017, Jaray observes that “I sometimes agonise for days over a millimetre and clearly so do you”. This rigorous sensuousness runs throughout the Frestonian show. It plays out in the echoes that reverberate between the voluptuous but also tautly contained curves and coils of De Monchaux’s carved plaster sculptures Hatteras, Two Part and Three Part (all 2020) and the precise scoops and points where Jaray’s colour planes align in the pair of paintings: On Hundred Years (Green) and One Hundred Years (Dark) (both 2017). While Jaray’s paintings use colour and form to conjure up and play with illusory space, De Monchaux’s sculptures gather, contain and orchestrate their surroundings. Architectural references abound, whether in the rows of lunettes in Jaray’s two Predella paintings from 2017 or De Monchaux’s quartet of carved lime works, each of which each have various echoes of the corbels, tiles and boss motifs photographed by Jaray on buildings, both ancient and modern, which she shared with her artistic compadre. In August 2013 Jaray praises one of De Monchaux’s curvaceous sculptures as expressing “the controlled wildness of later life” while he, a couple of years later, salutes two of Jaray’s paintings (both now in the Frestonian show), Predella (Dark) and Predella (Light) (2017) as showing her “at the height of [her] powers, balancing elements with great precision to launch those lunettes and their intervals into alternating focus. A great invention, radiating energy”. This energy and controlled wildness continues to be in abundant evidence in the work of these two extraordinary octogenarians. As this important exhibition confirms, they are indeed at the height of their powers—and made all the stronger by their mutual correspondences. • Tess Jaray/Paul de Monchaux: Corresondences, Frestonian Gallery, until 30 April

Rembrandt’s work joins with art by Black and Indigenous artists at the National Gallery of Canada this spring
Andy Warhol Foundation fights back in fair use case
To Top
error: Content is protected !!
Top