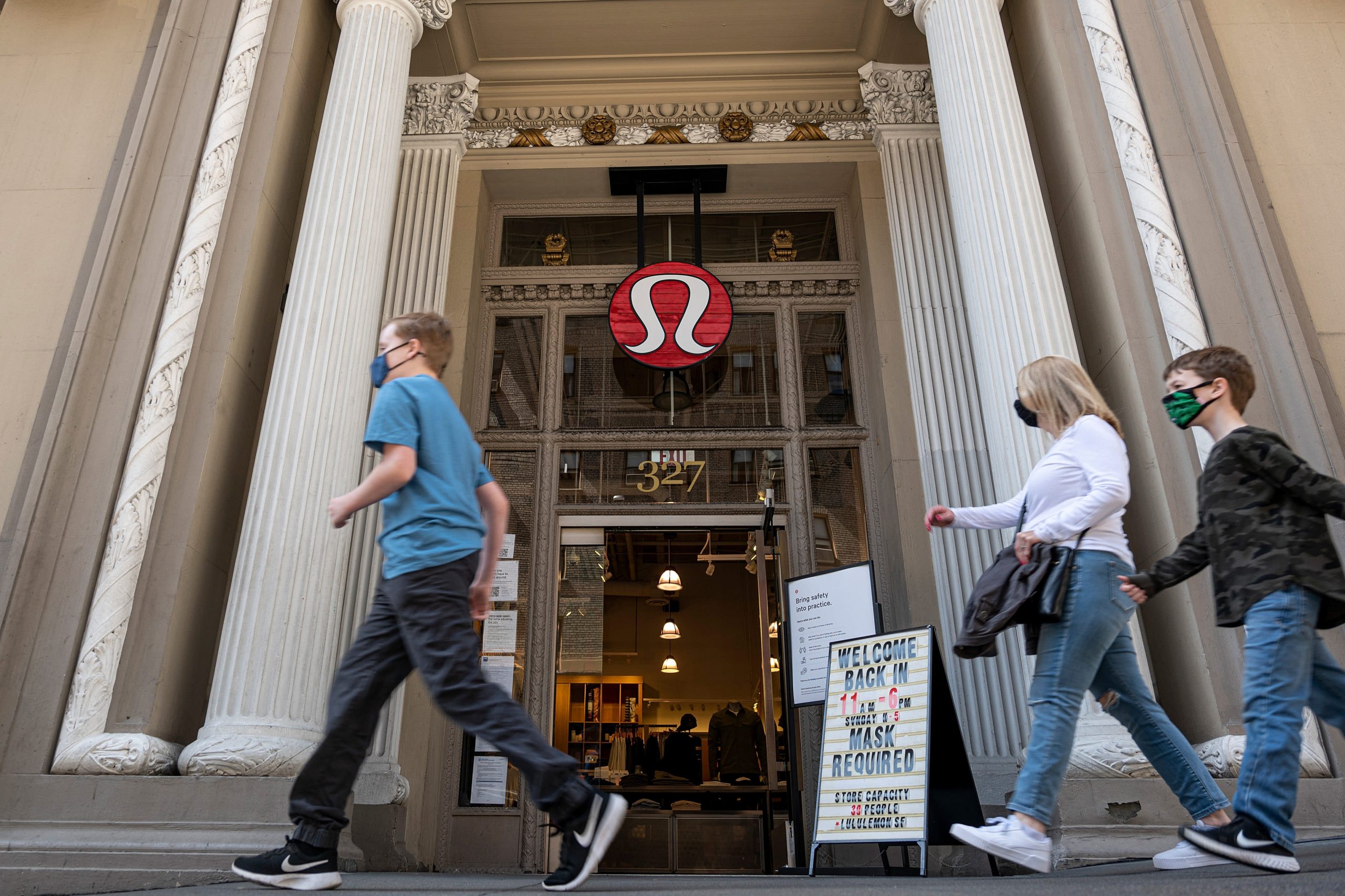 Pedestrians wearing protective masks walk past a Lululemon store in San Francisco, California, on Monday, March 29, 2021.David Paul Morris | Bloomberg | Getty ImagesLululemon on Tuesday reported revenue and profit for the holiday quarter that topped analysts’ estimates, boosted by the athletic apparel maker’s online business, and double-digit sales growth in both its women’s and men’s divisions.It also offered an upbeat outlook for sales during the current quarter and for the year, anticipating consumer demand for its sweat-wicking leggings and sports bras will continue.Its shares were up about 1% in afterhours trading.Here’s how Lululemon did during the quarter ended Jan. 31 compared with what analysts were expecting, based on a poll by Refinitiv:Earnings per share: $2.58 adjusted vs. $2.49 expectedRevenue: $1.73 billion vs. $1.66 billion expectedLululemon reported net income of $329.8 million, or $2.52 per share, compared with net income of $298 million, or $2.28 per share, a year earlier. Excluding one-time items, the company earned $2.58 per share, better than the $2.49 expected by analysts.Its revenue spiked roughly 24% to $1.73 billion from $1.4 billion a year earlier. That topped expectations for $1.66 billion.Its online sales surged 92%, as many consumers preferred staying put at home and shopping from the comfort of the sofa during the Covid pandemic. Women’s sales were up 19%, and men’s grew 17% during the quarter, the company said.In North America, revenue grew 21%, while international sales rose 47%.Direct-to-consumer sales nearly doubled, and represented 52% of total sales in the quarter, compared with 33% of sales during the year-ago period, it said.”We are still in the early innings of our growth, fueled by exciting innovations,” CEO Calvin McDonald said in a statement.Lululemon now expects first-quarter revenue to be in a range of $1.10 billion to $1.13 billion, compared with analysts’ average estimate of $999.5 million, according to Refinitiv.For fiscal 2021, the company is calling for revenue to be in a range of $5.55 billion to $5.65 billion, compared with analysts’ average estimate of $5.42 billion.It cautioned, however, that further resurgences in Covid-19, including from variants, could cause additional restrictions that could suppress shopper demand as well as lead to supply chain disruption.For now, the company said it remains on track to hit the targets it previously charted to hit by 2023, including doubling its men’s and online sales, and quadrupling international revenues.Lululemon also now owns the at-home fitness equipment maker Mirror, which offers another source of revenue growth beyond the pants, tops and workout accessories that it sells.Lululemon’s shares are down about 8% year to date, as of Tuesday’s market close. Lululemon has a market cap of $41.3 billion.Find the press release from Lululemon here.

Double mutation of the Covid variant in India risks spreading to other countries, doctor says
Germany suspends use of AstraZeneca’s Covid shot for the under-60s, dealing another blow to drugmaker
To Top
error: Content is protected !!
Top