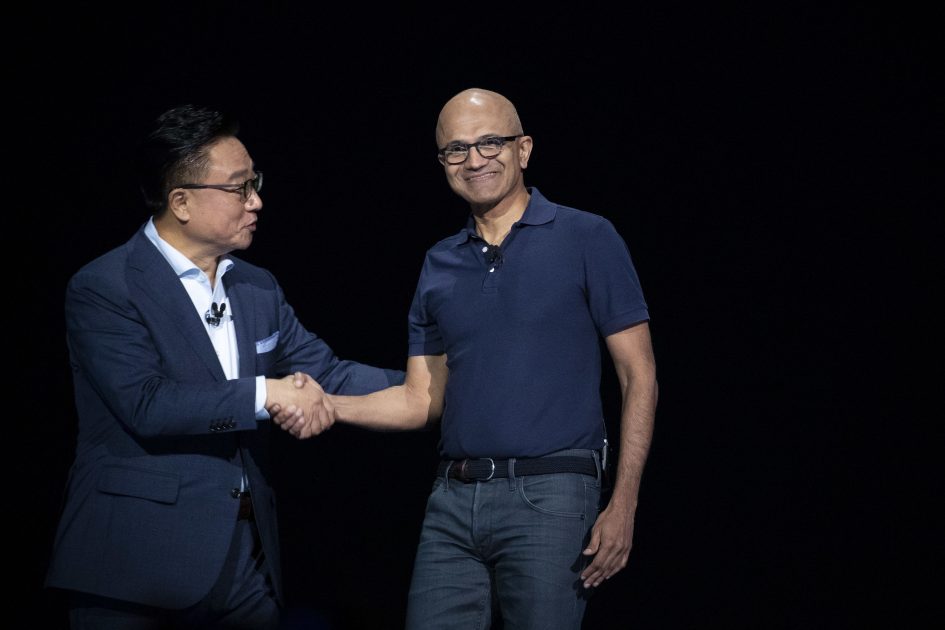 DJ Koh, president and CEO of Samsung Electronics, shakes hands with Satya Nadella, CEO of Microsoft, at a launch event for the Samsung Galaxy Note 10 smartphone in New York on August 7, 2019.

Microsoft’s Windows revenue growth has run its course, and under Satya Nadella, Microsoft has become less militant about supporting its own platform first.

For more than five years now Microsoft’s Office applications like Outlook and Excel have been available on Apple’s iPad, as well as tablets running versions of Android. Today Outlook is ranked among the top 50 free apps on Apple and Google’s mobile app stores.

The strategy seems to be working: The stock has risen 275% since Nadella took the helm in 2014. On that day Nadella sent out a memo that talked about succeeding in a mobile- and cloud-first world — and didn’t mention Windows once.

So now, Microsoft is extending that strategy far and wide.

Last week, Microsoft cozied up to Samsung, one of the biggest names in the Android ecosystem. It announced that soon people with the Galaxy Note 10 smartphone will be able to use whole apps installed on the phone directly from Windows 10. Outlook will be pre-installed on each Note 10 phone, and Microsoft has made it possible for people to do more in Outlook with the phone’s built-in stylus.

“When it comes to Microsoft and Samsung working together, I think of their collaboration as highly complementary,” Milanesi wrote in a blog post. “Microsoft gets key software and services in the pockets of what eventually will be millions of users as the collaboration expands from the Note to other devices. Samsung gets from the pockets onto the desks of millions of people broadening the value delivered by their phones.”

On Friday Sony said that Minecraft was the top game on PlayStation 4 in terms of downloads in July. The companies are getting cozy in other ways, too: Despite competing with Microsoft in gaming for decades, earlier this year Sony said that it would evaluate Microsoft’s Azure cloud infrastructure to deliver game services.

Microsoft could also be lining itself up for a new technology win on Apple’s iOS. Apple is betting big on augmented reality, where computer-generated images are superimposed on the real world (like Pokemon Go), with CEO Tim Cook telling CNBC in 2017 that it would make the iPhone “even more essential.”

Instead of focusing exclusively on its own augmented reality product, Hololens, Microsoft is readying Minecraft Earth, a game in which players can build blocky virtual worlds atop the real world around them, for iOS.

An early version suggests that Microsoft still has issues to iron out before the full release, although that hasn’t stopped people from sharing their creations on social networks.

A search for #minecraftearth on Facebook’s Instagram yields a video of a tiny house being rotated virtually on the surface of a night table, along with a photo of a fake sailboat standing tall on an actual beach, and snapshots of a handful of blocks exploding on the carpet of a person’s office. “Help! My office is on fire!” wrote the person who posted the carpet scene, prompting 71 likes. A YouTube video entitled “I Built My FIRST HOUSE in Minecraft Earth!” has accumulated 1.4 million views in three weeks.