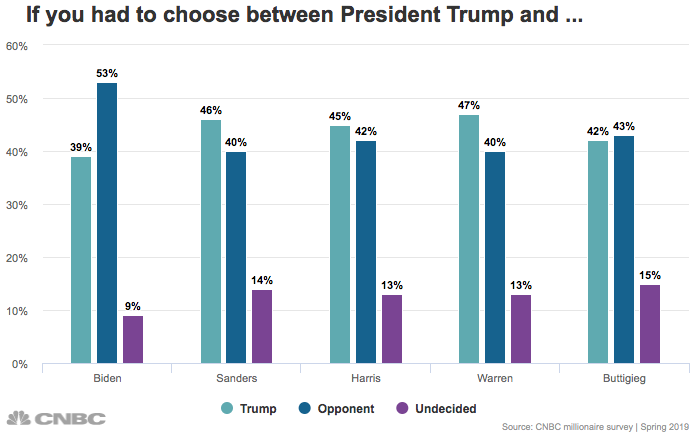 American millionaires would elect Joe Biden over President Donald Trump if the former vice president becomes the Democratic nominee, according to a new survey.

The CNBC Millionaire survey asked millionaires who they would choose for president if Trump runs against various opponents in 2020. Biden and Pete Buttigieg are the only Democratic nominees who beat Trump among the top Democratic candidates in a head-to-head race.

Fully 53% of millionaire respondents said they would vote for Biden, compared with 39% for Trump, while 9% would be undecided. In a race between Trump and Buttigieg, the mayor of South Bend, Indiana, wins 43% to Trump’s 42%.

Of course, millionaire voters aren’t reliable predictors of election results. Millionaires backed former Secretary of State Hillary Clinton by a comfortable margin over Trump before the 2016 election, 44% to 31%, according to the CNBC Millionaire Survey.

And being favored by millionaires could be a negative for Democratic candidates, who are running on populist, antiwealth platforms. Biden is already being attacked by his opponents for being too cozy with wealthy donors and corporate lobbyists.

Yet given how much wealthy investors have prospered under the Trump presidency — from lower taxes and surging stock prices and cash buybacks — millionaire support for Biden suggests that economic issues may not be their primary concern.

“I think what it tells us is that millionaires think that Biden is better against Trump than the other candidates,” said George Walper, president of Spectrem Group, which conducts the survey. To be included in the poll, respondents had to have investable assets of $1 million or more. Of the 750 respondents, 261 were Republicans, 218 were Democrats and 261 identified as Independent.

Walper said that just as in 2016, millionaire voters may be underreporting their support for Trump.

“People’s underlying opinions may not be expressed here,” he said. “When it comes down to who they actually vote for, that gap may narrow.”

Wealthy voters are also large donors, which could help Biden. Nearly half of Democratic millionaires plan to donate to the 2020 campaign or have already donated, according to the survey, that compares with less than a third of Republicans.