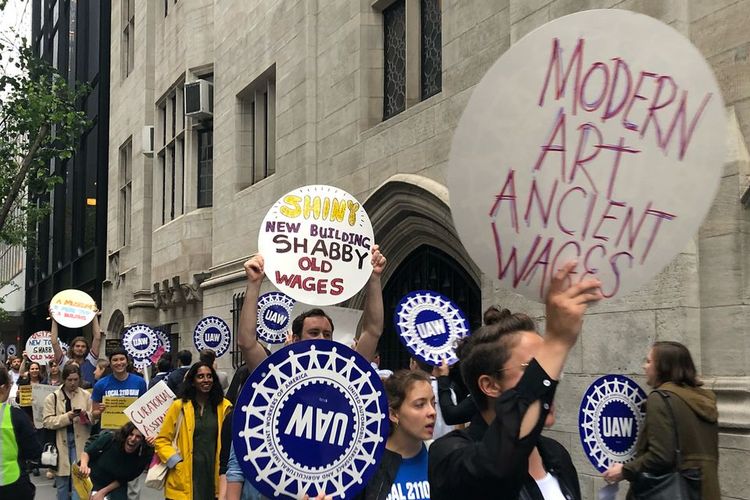 
If we stand for inclusivity, equity, transparency, accountability, diversity and all the other under-interrogated and overused buzzwords our mission statements claim we do, then we must put our money where our mouths are. This idea is at the heart of the Salary Transparency Spreadsheet, a very basic Google document we started three weeks ago to share our own salary histories in an act of local collegiality. We never imagined that less than a month later there would be 2,549 entries (and counting) submitted from all over the country and across the globe. But neither were we entirely surprised. In the past few weeks alone, unionisations at several major US museums and cultural institutions, Kimberly Drew’s salary share at the American Alliance of Museums meeting, the Association of Art Museum Directors’ statement this week on unpaid internships and the POWArts Salary Survey have demonstrated the power of coming together for labour solidarity. Arts workers­–including every single person who added their data to this project, or who talked about it with colleagues–are seizing the opportunity to act together for real change.

It took us three minutes to build this spreadsheet. It is not a perfect survey tool, nor was it ever intended to be. While we’ll work with statistics professionals to review and glean meaningful facts and figures from the information contributed where we can, this is not first and foremost what the project is for. Its primary goal is to catalyse us all into action. That is why we entered our own information and what we hope it is doing in every arts workplace. True change comes not from signalling values, but from each of us putting a small amount of ourselves on the line to inch toward something better for us all (to wit, Nikki Columbus’s pregnancy discrimination suit, which showed us the bravery of speaking up solo). So many of you did that by adding your own information to the cells, as anonymously or identifiably as you felt able. It was solidarity in action that exposed the asymmetries of speaking progressive politics on gallery walls and in mission statements but not in human resources policies. These collective actions have already joined old and sparked new conversations that will contribute to concrete changes at individual and collective levels.

If we look at the data with a desire for simple facts, then, yes, the spreadsheet can help us understand the brutish realities of pay and benefits in a given position, organisation or region. But we think that much of this information was, at least at macro level, known to us all. Even if we routinely ignore it, we are ourselves, or we work daily alongside, contingent hourly workers who welcome museum visitors with a bright smile but have no benefits to get to the dentist or doctor; we are, or work alongside, manage and benefit from the labour of unpaid interns scraping by with support from families or a string of shadow jobs; most of us are working without paid family leave, hoping to accrue enough time off to get sick or give birth; and the contributions to the spreadsheet predictably detail a predominantly white, female workforce in the early and mid-career positions, with a string of men showing up in the upper-echelon paychecks recorded (in the US) on 990 forms.

The data does not show any of the side gigs or better paid other halves that it takes to be in these positions; nor did it record any of the (saner) people who dropped out after training for a field that isn’t compatible with having kids, illness, student debt or work-life balance–or a field that simply didn’t make space for them in the first place. It is infuriating to see the facts stacked up in black and white, but how many of us can truly say we were unaware?

Though we think it’s helpful and noteworthy, the spreadsheet is not a place to look for a robust quantitative analysis of our field, and there are colleagues already focusing on that equally important work. The spreadsheet is a tool that joins a larger kit of parts that has been shaped by others before us and is being actively added to now. It is a match to be struck and used to light up whatever further actions we can undertake together as colleagues across boundaries of institutions, geography and experience in service of more equitable futures for us all. It is a provocation that asks everyone: what are we doing today to make it better tomorrow to work in a field we all adore, admire and want to see thrive?

Michelle Millar Fisher is a US-based museum curator, and Art + Museum Transparency is a group of anonymous art workers.

Mini Impressionist and Modern sale at Sotheby’s makes £99m thanks to auction debutantes
How to spend the longest day of the year with art and nature
To Top
error: Content is protected !!
Top