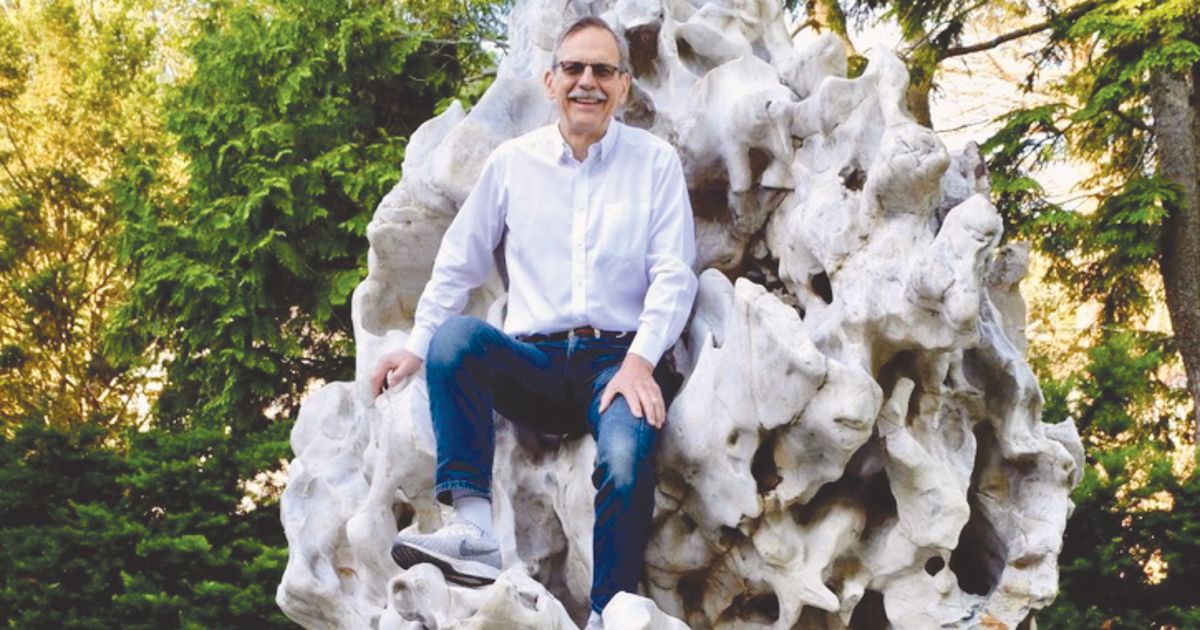 Timothy Springer, a Harvard professor and an early investor in Covid-19 vaccine maker Moderna, brought a 23-ton gongshi from China to the US
Courtesy of Timothy Springer

Traditionally, gongshi, or Chinese scholars’ rocks, have graced the workspaces of great thinkers. But while the rock collection owned by Timothy Springer, an immunologist and Harvard Medical School professor, does not fit on his lab desk, it has influenced his work in other ways. A founding investor in biotech companies such as Moderna, whose Covid-19 vaccine was approved in the UK today (and which has recently made him a billionaire), Springer has been inspired by the naturally sculpted rocks that have been treasured across China, Korea and Japan for centuries, and even named one of his biopharmaceutical companies—Scholar Rock—after them. Springer started his collection in 1998, when he and his wife Chafen went to an Asian art fair in New York. One stand featured an impressive waist-high rock. “I’d never seen anything like that before,” he says. He bought the rock and learned about gongshi at home in Cambridge, Massachusetts, primarily from Kemin Hu, a leading expert and dealer who lives just a few towns away.Springer is more interested in the tradition of stone appreciation in China than in Japan, where these rocks are dubbed suiseki, or Korea, where they are called suseok, with one playing a supporting role in the recent Oscar-winning Korean film, Parasite. “The aesthetic of the Chinese is that there should be no visible work on the rock whatsoever,” Springer explains. “It should be totally natural.” The first set of criteria for Chinese stone collecting was developed around a millennium ago during the Tang and Song Dynasties, and outlined that stones extracted in nature should be evaluated according to their shou (thinness), lou (channels), tou (holes) and zhou (wrinkles). These criteria still hold today.“I see them as a form of abstract sculpture and as the original impulse to elevate a found object to fine art status, not unlike a readymade,” says Donna Dodson, an artist who curated an exhibition of contemporary art inspired by scholars’ rocks, recently on view at the Korean Cultural Center in New York. Between 1,000 and 3,000 collectors own scholars’ rocks across the continent, according to Thomas Elias, a co-founder of the Viewing Stone Association of North America with his wife, Hiromi Nakaoji. He also notes that many major American museums have gongshi in their collections.Monumental missionAfter spending a decade learning about gongshi at various symposia and lectures, Springer was inspired to make a major acquisition when he began building a new house. He wanted to plant a monumental rock in the garden, tall enough to scale the height of his home’s second storey. And he wanted to choose it himself, in China. “I went over there on that quest and wound up finding a rock that weighs 23 tons,” Springer says. One of his Chinese academic contacts knew a dealer in Guangxi province and accompanied Springer there to see gongshi in the very place where they are pulled from the Hong Shui riverbed by free divers wielding steel cables. Springer knew exactly what he wanted, both in terms of height and sculptural quality. “I like to see the interaction between the material and the erosion of water. The rocks only get character when they’re held in one place on the bottom for a very, very long time,” he explains. “Other rocks get in and get caught, and then you have a mortar-and-pestle effect, where the turbulence of the water drills all the way through the rock.”Over the years, Springer has bought thousands of rocks. And while he went to China to find gongshi, other American collectors buy them on the market, or even harvest them nearby. “Groups of individuals began to search for stones in rivers, streams, and desert or semi-desert environments in North America,” says Elias of the dozen or so active viewing stone clubs on the continent. “Interest has grown among collectors in establishing a distinctly North American concept of stone appreciation.”Dodson believes that experts like Hu would argue that where the stones come from is of lesser importance; it is about the people collecting them. “When asked if the stones have spirit, [Hu] will say that people who see something in the stones have spirit.”