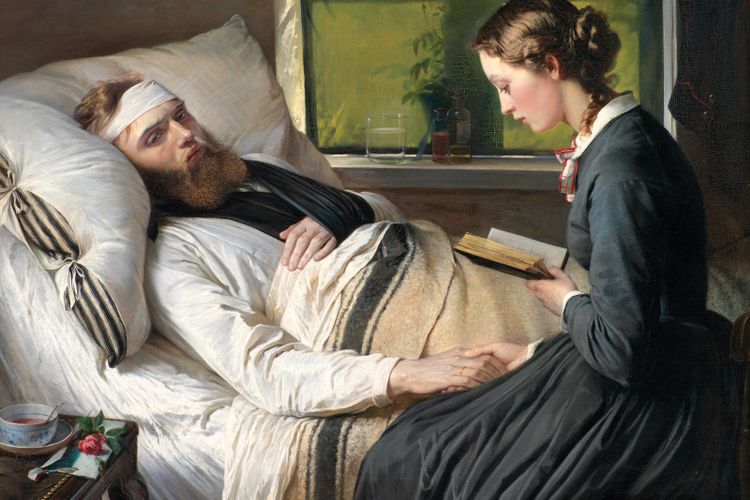 
Elisabeth Jerichau-Baumann, A Wounded Danish Soldier (1865)
Courtesy of the Statens Museum for Kunst


Peter Nørgaard Larsen, the chief curator of a new exhibition of the Danish Golden Age at the Statens Museum for Kunst, believes it is especially pertinent for Danes today because of the rise of ethnic nationalism and the consequent discussions of “Danishness”.

“The Danish Golden Age has been very important in constructing the concept of Danish identity, creating images of Denmark and the Danish landscape that has been very important in 19th-century nation-building,” he says. “We therefore find it crucial to discuss the image of Denmark and to ask questions on whether this image is sufficiently nuanced, and if it includes the relevant perspective and narratives.”

The conventional account of the Danish Golden Age of painting has described the period bracketed by the Congress of Vienna (1815) and the First Schleswig War (1848-52)—contemporaneous with, and stylistically similar to, the Biedermeier period in the Austrian Empire.


A Danish Coast (1843) by Johan Thomas Lundbye, best known for his landscapes and animal paintings
Courtesy of the Statens Museum for Kunst


This exhibition of more than 200 paintings presents a “longer” Golden Age, fixing the end at the Second Schleswig War (1864), after which Denmark ceded the whole lower half of the Jutland peninsula and part of northern Germany to Prussia, which, according to Larsen, marked a definitive break in a unified sense of Danish identity. He argues, furthermore, that the later date allows the inclusion of those artists whose careers had begun before 1850 but who worked in the previous idioms for some years afterwards. The works of art selected are held to illustrate specifically Danish ideas about themes such as social definitions of the artist, landscape as an a nationalist mode, the meaning of the family, sex and intimacy, the interactions of art and science, and slavery.

Whether or not viewers accept the thesis of the exhibition, there can be no doubt as to the quality and power of the masters of this era. Some—Christoffer Wilhelm Eckersberg, Christen Købke, Carl Michael Dahl, Johan Thomas Lundbye, Martinus Rørbye and J.L. Lund—have become familiar to international audiences through recent exhibitions in the US and Europe. This show introduces many new artists, especially those active post-1850, including overlooked women, such as Christine Løvmand, Hermania Neergaard, and Elisabeth Jerichau-Baumann, and younger-generation artists like the accomplished Christen Dalsgaard and Frederik Vermehren.

The exhibition will travel to the Petit Palais in Paris next spring. The catalogue in Danish, Swedish and English is a joint publication of the Statens Museum and the Swedish Nationalmuseum, from where it travelled.