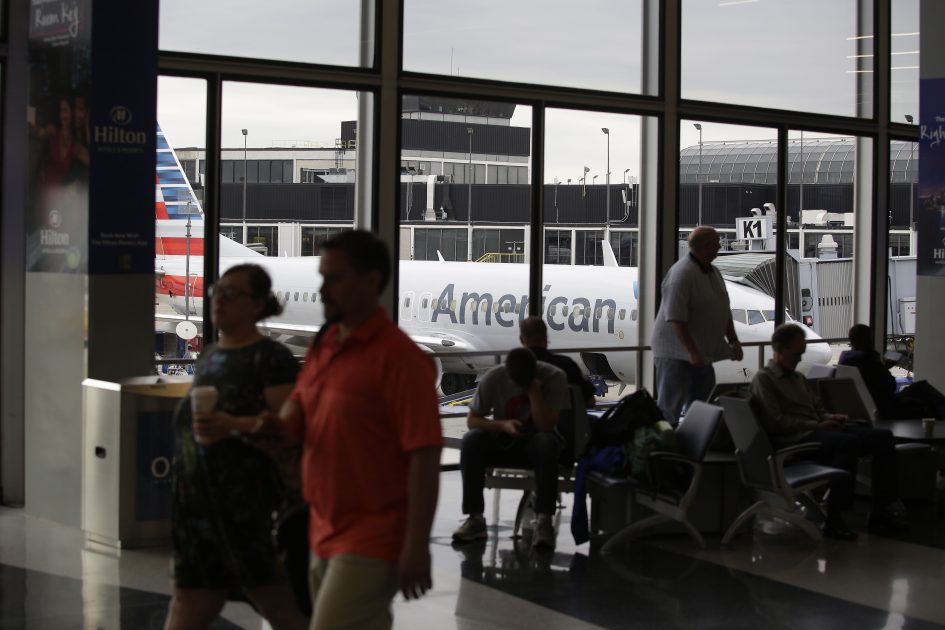 Travelers wait for flights as an American Airlines Group Inc. plane sits during an event to mark the opening of five new gates inside Terminal 3 at O’Hare International Airport (ORD) in Chicago, Illinois.

U.S. airlines have been bumping travelers at three times the rate as a year ago as hundreds of out-of-service planes force passengers to play a game of musical chairs at the airport.

Carriers denied boarding to 6,589 passengers in the three months ended in June, a rate of 0.3 per 10,000 passengers, compared with a rate of 0.1 for every 10,000 in the same period a year ago, the Department of Transportation said Thursday. That rate refers to travelers whom airlines bump, but not passengers who take a different flight voluntarily.

It’s a small number of affected travelers compared with the 215 million passengers who boarded planes in the U.S., but it is partially driven by the grounding of the Boeing 737 Max, now in its sixth month. American Airlines and Southwest Airlines each have the planes in their fleet and have had to cut their growth and cancel thousands of flights as federal regulators haven’t cleared the jets to fly after two fatal crashes, the most recent an Ethiopian Airlines jet in March.

Airline passengers, flying in what is expected to be the busiest summer travel season on record, are confronting increases in canceled flights, the DOT data show.

The Fort Worth-based airline, which has about 6,700 flights a day, is in the midst of a protracted dispute with the unions that represent its roughly 12,000 mechanics. The carrier is seeking damages from the unions, which it has accused of an “illegal work slowdown” to win leverage in contract talks, a move it said has forced it to cancel 950 flights over the past two months because of out-of-service planes.

“Our biggest challenge in the operation continues to be out of service aircraft,” said American Airlines spokesman Ross Feinstein. “This reduces our ability to start the day right and to swap aircraft when needed as the day goes on. American Airlines team members are working diligently to take care of our customers during a challenging summer.”

Flight delays have also increased. On-time arrivals fell to 73.3% in June, down from 76.4% a year earlier.