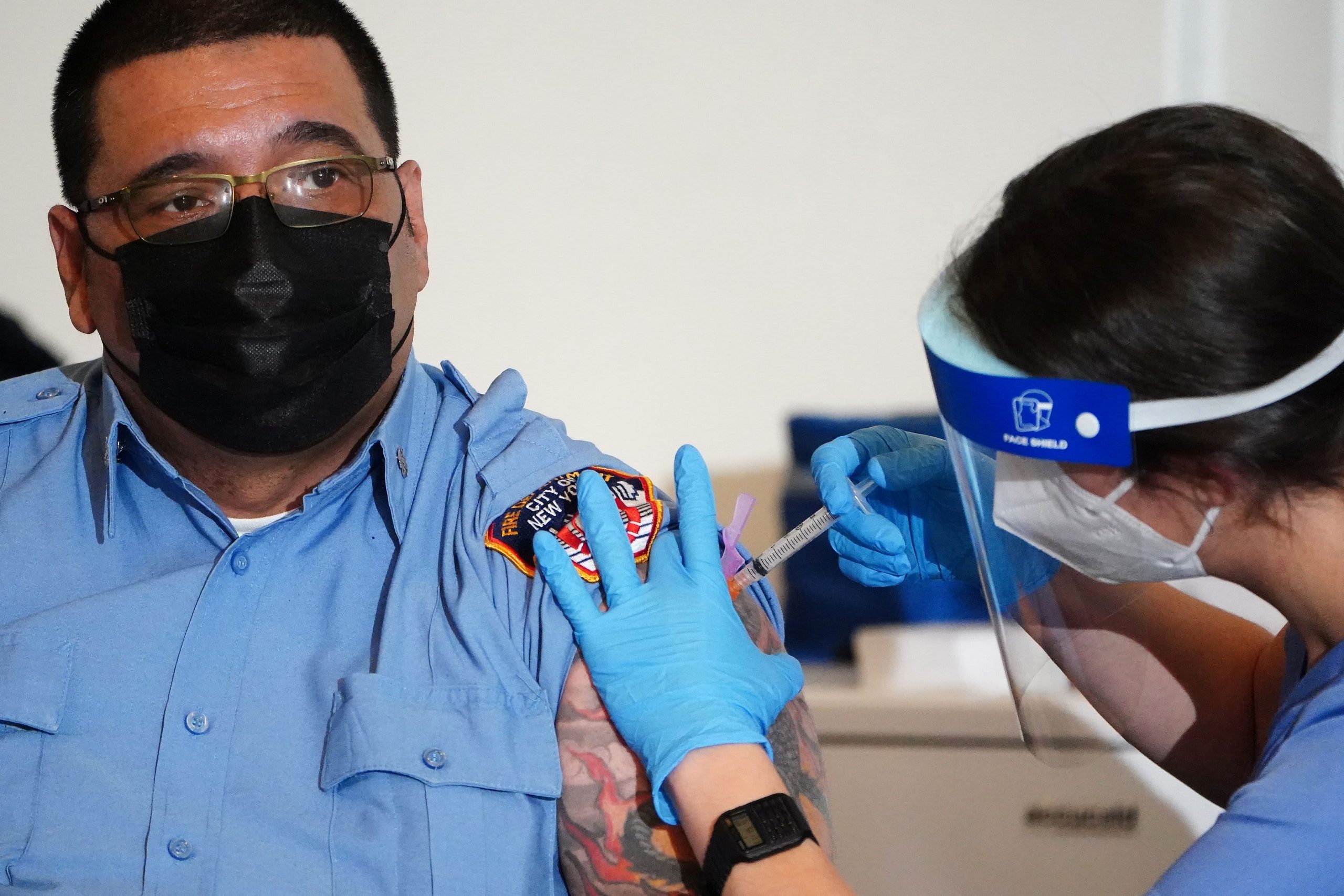 A worker of the New York City Fire Department Bureau of Emergency Medical Services (FDNY EMS) receives a COVID-19 Moderna vaccine, amid the coronavirus disease (COVID-19) pandemic in the Manhattan borough of New York City, New York, U.S., December 23, 2020.Carlo Allegri | ReutersNew York City officials want to inoculate 1 million residents against Covid-19 in January, saying the federal government and drugmakers need to speed up the production and distribution of the vaccine.Mayor Bill de Blasio said Thursday the city will use schools, pop-up clinics and “whatever it takes” to reach 1 million people within the month.”We know New York City can vaccinate 1 million people in the month of January and really put this thing into high gear,” de Blasio told CNN. “Every single time we vaccinate someone, we are one step closer to making the coronavirus a thing of the past in terms of the horrible grip it has on society.”It’s an ambitious goal considering the city has received just 390,425 vaccine doses and has been able to administer only about 78,000 shots, according to city data.”This thing is not moving the way it needs to in the United States,” the mayor said. “New York City is going to show that we can jump-start this and vaccinate people at a record pace. And we want to see the whole country to be a part of this because we need to go faster to fight back the coronavirus if we want to recover.”The U.S. government has fallen far short of its original goal of administering at least 20 million Covid vaccine shots before the end of the year — something federal officials have admitted is disappointing. The U.S. has distributed 12.4 million vaccine doses so far and inoculated just 2.8 million people with the first of the two-shot vaccine regimen from Pfizer or Moderna, according to the Centers for Disease Control and Prevention. U.S. officials say the data lags by 72 to 96 hours due to reporting delays at the state and local levels. Even so, it’s still a fraction of the Trump administration’s original target.The slower-than-expected Covid vaccine rollout has been disappointing, the nation’s top infectious disease expert, Dr. Anthony Fauci, told CNN on Thursday.”We agree that that number is lower than what we had hoped for,” Moncef Slaoui, chief advisor to the administration’s vaccine program Operation Warp Speed, told reporters Wednesday. “We know that it should be better, and we’re working hard to make it better.”De Blasio’s pronouncement comes as health officials in Colorado and California have detected a new strain of the coronavirus in a handful of cases in those states. The new variant, which de Blasio said hasn’t yet been found in New York City, was first identified in the U.K. and appears to be far more contagious.It also comes as the city prepares for its annual New Year’s Eve festivities, albeit without the usual crowds. Just a few hundred people, instead of the usual thousands, will be in Times Square with masks on and by invitation only for the ball drop at midnight to kick of 2021. De Blasio said the one thing that unifies all Americans in this divided country this year is “we want to get the Hell rid of 2020.”