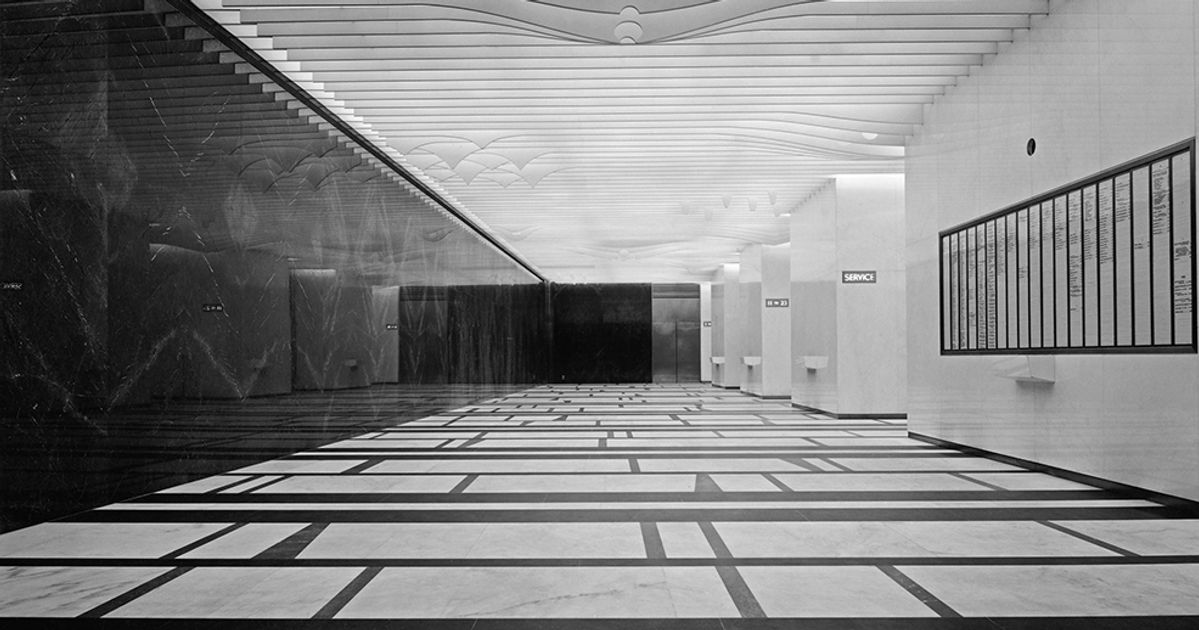 The lobby of 666 Fifth Avenue in 1957 with Isamu Noguchi’s ceiling in its original state.
Photo: Alexandre Georges; ©Isamu Noguchi Foundation and Garden Museum/ARS

Described by Isamu Noguchi as “a landscape of clouds”, a 1957 installation by the artist in the New York skyscraper 666 Fifth Avenue has been removed from the building at the insistence of a real estate developer, the Isamu Noguchi Foundation and Garden Museum in Queens announced today. The museum is now exploring how it might be relocated in a public space.The site-specific design by the Japanese-American sculptor consists of a ceiling of backlit steel and aluminium blades in twin lobbies and a wall of vertical blades down which water once cascaded in an adjoining passage. The Noguchi museum had advocated for the installation, Ceiling and Waterfall for the Lobby of 666 Fifth Avenue, to remain where it is was, but the developer Brookfield Properties, which owns the building, wanted it dismantled as part of a renovation. The museum says the ceiling and former waterfall were removed over the course of several weeks in October and November after it was documented and catalogued under its supervision. Brookfield Properties covered the costs and has donated the components to the museum, numbering 619 metal pieces for the ceiling and around 100 elements for the deactivated waterfall, it adds.A spokesman for the developer said in an email: “Unfortunately, the work we inherited was severely marginalised prior to our ownership of the building when the lobby was reconstructed decades ago, rendering Noguchi’s original vision unachievable. We are pleased the Noguchi Foundation will explore if it might be restored in a suitable location that could accommodate that vision.”The 1957 building is located across the street from the Museum of Modern Art. Between 1957 and 2018, it changed hands several times, the museum says, with each change resulting in significant alterations to the lobbies. Memorably, Kushner Properties, the family firm of President Trump’s son-in-law Jared Kushner, purchased 666 Fifth Avenue in 2007 for $1.8bn, the highest price ever paid for a single building in Manhattan, and then struggled with debt obligations. Brookfield Properties effectively assumed ownership in a bailout lease deal in 2018 that is now being scrutinised by congressional investigators.The museum says the changes that proved most damaging to Noguchi’s aesthetic over the years were the closure of the Fifth Avenue entrance, which divested the installation of any connection to the street; the replacement of the lobbies’ marble floor and walls with generic wood and granite; and the deactivation of the waterfall. The institution noted that it had argued for the installation’s preservation in situ, “even if that required some adaptation”, but that Brookfield Properties did not agree.The Isamu Noguchi Foundation and Garden Museum will now determine whether and how it might be possible to give Ceiling and Waterfall a new life in the public sphere,” it says.Noguchi’s site-specific works have often fallen prey to the vicissitudes of the real estate market and changing tastes. His work has now notably entered the White House Rose Garden, however: in November the outgoing first lady, Melania Trump unveiled his 1962 bronze sculpture Floor Frame there following its acquisition by the White House Historical Association last spring.