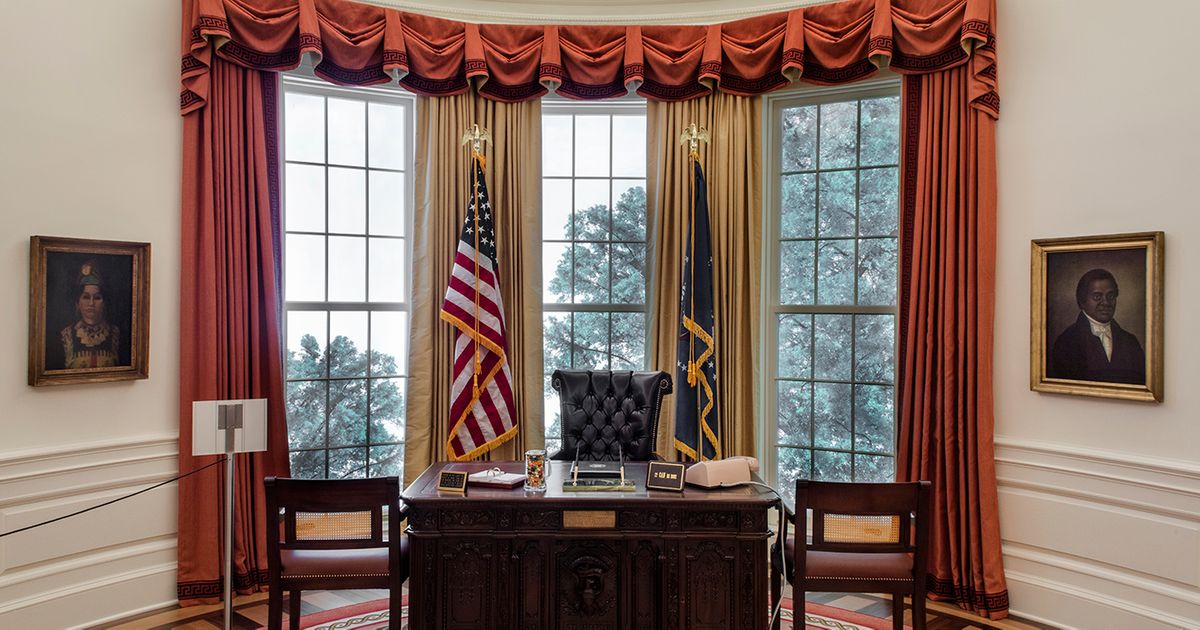 As attention focuses on Joseph R. Biden Jr’s inauguration next week and the exit of Donald Trump, an exhibition at the New-York Historical Society (NYHS) invites visitors to reflect on the US presidency. One of the most popular elements of Meeting the Presidents is a re-creation of the White House Oval Office, where the commander-in-chief has exercised his powers and responsibilities since 1909. The rarefied surroundings include a replica of the president’s desk and other authentic furnishings as well as architectural décor recreated by the New York firm PBDW. In the early days of the show visitors were allowed to sit at the desk, known as the Resolute, for a photo op, although Covid-19 safety protocols prevent that now. “It seemed like a way to teach about presidency that would be tangible and memorable,” says Marci Reaven, vice president of history exhibits at the NYHS, adding, “It has proved very popular—a total success.”The immersive Oval Office experience includes audio excerpts aired from tapes secretly recorded in the Oval Office from the administrations of Franklin D. Roosevelt to Richard M. Nixon. Segments includes moments like Lyndon B. Johnson discussing civil rights legislation with Martin Luther King Jr in 1962 and Nixon learning in 1971 from his chief of staff Alexander Haig that The New York Times was publishing a secret report, the Pentagon Papers, about the Vietnam War.An adjoining exhibition gallery charts the evolution of the presidency and executive branch through works of art and other objects.The décor of the Oval Office re-creation is inspired by Ronald Reagan’s second term (1985-1989), when it was refurbished by a leading Hollywood designer at the behest of the president and his wife Nancy. “The Reagans very purposefully created a design that would convey grandness and authority and power,” Reaven says, from the ornate lamps to the fabric of the curtains to the sunbeam design of the rug. (Less imposing accoutrements include a glass jar filled with the jelly beans that Reagan liked to snack on.)

Presidents can redo the office to suit their own tastes, but a few elements have remained fairly consistent across administrations, like the tendency to feature a portrait of George Washington–the NYHS replica features one by Rembrandt Peale–and the Resolute desk, where Trump sat down this week to record a video insisting that he condemned the violence perpetrated by his supporters at the US Capitol.

The desk has a colourful history: Commissioned by Queen Victoria, it was built from the timbers of the HMS Resolute, an abandoned British ship discovered by an American whaling vessel and returned to England. Victoria presented it to President Rutherford B. Hayes in 1880, and it has been used by every US president since, with the exception of Lyndon B. Johnson, Richard M. Nixon and Gerald R. Ford, according to the Ronald Reagan Presidential Foundation and Institute in California. Asked to predict what a Biden Oval Office might look like, Reaven says, “That’s outside of our skill set, but I can only imagine it will be a place where the seating will be very comfortable, and I don’t see him trying to inject an air of hierarchy and grandness.”For each president, she says, the Oval Office essentially projects: “Who am I? Who are we as a people? Who am I as a leader?” The Meet the Presidents exhibition gallery meanwhile charts how presidents have interpreted and fulfilled the obligations of the office and how their powers have evolved and expanded over time, while featuring a range of portraits, memorabilia and other objects and displays. Sections investigate themes like power, domestic affairs, foreign affairs and the exercise of leadership.

Lily Wong, an assistant NYHS curator who organised the exhibition with Reaven, points to highlights like the bible on which George Washington took his oath of office in 1789, a chair from that inauguration at Federal Hall in New York and a compelling student scrapbook chronicling Kennedy’s leadership during the 1962 Cuban missile crisis.

Wong also cites an interactive game panel, Playing the President: FDR’s First Hundred Days, which presents different options Roosevelt faced while making crucial policy decisions with the nation mired in the Great Depression. Visitors can guess at which options he chose: “It’s interesting when you have made different choices from FDR,” she says.In line with Covid-19 safety measures, visitors must obtain timed tickets to visit the New-York Historical Society, which is currently open Friday through Sunday.An earlier version of this article, citing information from curators, indicated that visitors can sit at the Resolute desk in the Oval Office re-creation for a photo op. That option is no longer allowed under safety protocols.